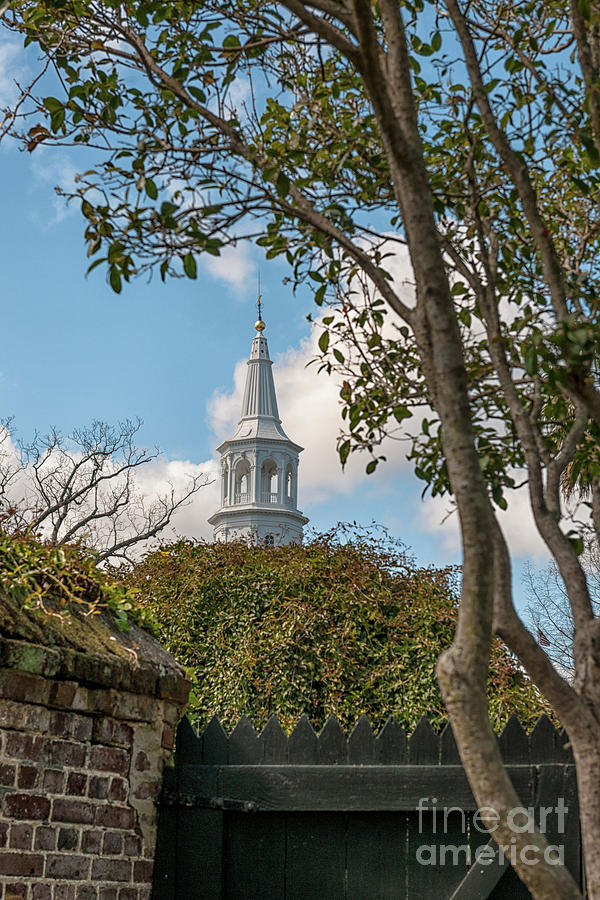 St. Michael's Episcopal Church, a National Historic Landmark, is one of the finest Colonial American churches in the country and the oldest church in Charleston. Although the architect is unknown, the church was built between 1752 and 1761 and resembles 18th-century English pattern book examples widely used throughout the colonies. It is similar in many respects to London's St. Martin-in-the-Fields, designed by James Gibbs. Prominent and elegant features of the two-story stuccoed brick church are its giant classical portico and a 186-foot high massively proportioned steeple. The history of the congregation of St. Michael's is rooted in that of St. Philip's Episcopal. The first St. Philip's church stood at this site from approximately 1681 to 1727. In 1751, the congregation divided, and the residents of the lower half of the city formed St. Michael's.

Approximately 15 years after its doors opened, St. Michael's became Charleston's focal point of Colonial resistance to the British. During the Revolutionary period, the church tower was a target for British ship gunners. In the hopes of decreasing it's visibility the white tower was painted black, which made it even more visible against the blue sky. Contributing to the war effort, the lead roof was melted down for bullets. The steeple continued to function as a navigational landmark and observation post during all subsequent major American military conflicts, as well as a fire lookout until the late 19th century.


Historic view of St. Michael's Epsicopal Church, circa 1866-1900
From the photographic collections of the South Carolina Historical Society, 39/007/062
St. Michael's has amazingly survived several hurricanes, wars, fires, earthquakes and a cyclone with little alteration to its architecture. When damaged, the church has been carefully restored or reconstructed. The current portico dates to the late 1880s, and is a replica of the original which was damaged in the 1886 earthquake. The interior of the church still retains its traditional 18th-century English design, with a three-sided second story gallery and native cedar box-pews. The pews, including Number 43 used by George Washington in 1791 and General Robert E. Lee in 1861, have recently been restored to their 18th-century finish. St. Michael's bells are among the city's most beloved treasures, imported from England in 1764. During the Revolutionary War the bells were taken to England as a prize of war, but a London merchant purchased and returned them. During the Civil War, they were sent to Columbia, but cracked in a great fire there in 1865. The metal fragments were salvaged and sent to England to be recast in their original moulds and rehung. St. Michael's continues to be a major city landmark, representing ecclesiastical law in its prominent position at the "Four Corners of the Law," originally the Civic Square in the 17th-century plan of the city.

Thank You for featuring my image in the Churches Group