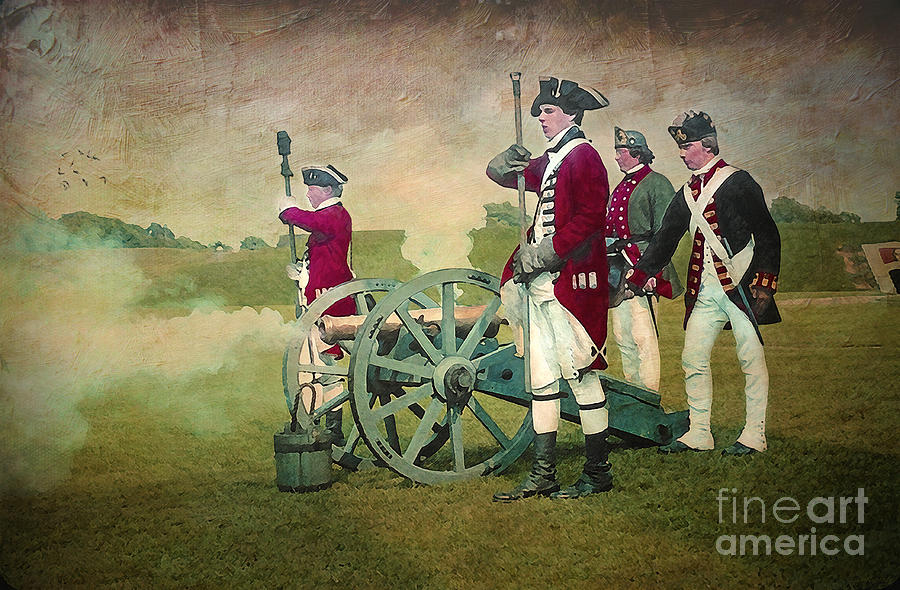 This digital painting was accomplished in multiple layers using different painting styles and techniques overlaid on each other. The base image is a photograph of the re-enactment of the defense of Old Fort Niagara by British soldiers after they had captured it from the Americans. The photo is in the public domain courtesy of the National Park Service.

Old Fort Niagara on the United States side of the Niagara River sits at the mouth of the river and has a history that spans more than 300 years and encompasses the actions of four nations - France, Great Britain, the United States and the Iroquois Confederacy. Its location was vital because it controlled access to the Great Lakes and the westward route inland to the heart of the continent.

The French were the first to recognize the importance of the location and built three forts at Niagara - two fairly rudimentary and short-lived and the third, the "French Castle," was held until 1759 when French forces succumbed to a superior British army. Revolutionary forces attempted to take the fort several times during the War of Independence but were repulsed each time. Old Fort Niagara was ceded to the United States in 1796 but retaken by the British during the war of 1812. Restored to the United States in 1815 by terms of the treaty, it has been in US possession ever since. It remained a strategically important military post until 1825 when the completion of the Erie Canal reduced its importance as a gateway. It remained an important military outpost, however, until well into the 20th century and was refortified during the Civil War although the post saw no action. Today, the US Coast Guard is the only military presence on site but re-enactments of the war of 1812 and the British conquest of the fort in 1813 take place at the end of August each year. The fort is open year round except for New Year's Day, Thanksgiving and Christmas and tours of the historical military base with demonstrations, musters and the opening of the lighthouse take place daily.

Many of my paintings, including this one, follow a process similar to early chromolithography in that each section of the painting is often a different layer. Wikipedia describes the process of chromolithography as multi-layered, sometimes requiring 25 to 50 layers to achieve the colors and fine details.

The difference between that process and my own is that in my case I may paint the entire layer originally in a very abstract underpainting then repaint the next layer in a slightly less abstract style, then another layer in a realistic oils or impasto, etc. Another layer may be to deepen the color of only certain areas requiring the "erasing" of all but one small part of the image. Almost all of my paintings require anywhere from 10-30 layers to complete, some as many as 50.

Thank you for your interest in my artwork. If you would like to see more, my full portfolio can be found at http://lianne-schneider.artistwebsites.com. If you enjoy my art works, please feel free to share this link with friends or share on your social networks by pushing the Pinterest, FB, Google+, Twitter or SU Buttons! Thank you!

I am a western New York based artist with a passion for the sea and a deep love for the natural world around me. My paintings are sometimes based on images in the public domain or on elements from classic art work. Other paintings are based on original photographs. All are painted on a Wacom tablet using a variety of painting programs and filters and because the final creations are entirely digital in nature they are considered to be original art work not reproductions.

This painting is an ORIGINAL digital art work created on the computer from a "slavish photographic copy" of a public domain painting or photograph, recreated and hand-painted on a Wacom tablet using a variety of painting styles and digital mediums. According to the International Association of Fine Art Digital Print Makers (IAFADP), "An original digital print is not based upon using original artwork outside of the computer. The artist may use elements as source materials, such as photographs, drawings or other appropriated images (those in the public domain), but THE FINAL FORM OF THE WORK EXISTS ONLY IN THE COMPUTER AND AS THE FINAL PRINT OR AS AN EDITION OF PRINTS." Furthermore, according to ArtBusiness.com, there is a distinct difference in value between a print/scan of an original watercolor, painting or photograph "...as opposed to original digital works of art created by digital artists entirely or in part on computers which ARE considered to be unique." This is exactly how I create my original works and each painting is the result of many layers of hand-painting in various styles (impasto, pen and ink, digital oils, etc.) then overlaid upon one another.

You can purchase quality traditional style fine art prints of these digital paintings, giclee canvas prints, acrylic and metallic prints by Lianne Schneider. They are beautiful and stylish decor for any wall in your home, office or lobby. My works include detailed landscapes, seascapes, still lifes, flowers and more...all with the look and feel of classic oil paintings. The FAA-Watermark will NOT appear on any final product!

Please contact the artist, Lianne Schneider, directly if you purchase this image as a giclee print on canvas, framed or unframed. A signed and numbered Certificate of Authenticity is available for each canvas indicating title of the work, my name, date of creation, a thumbnail of the painting, the origin of original work if the painting is a derivative, the number of your print in the limited printing and a guarantee that the work will no longer be available to the public in a canvas format once a total of 25 canvas prints are sold from all potential vendors.

I am a DAR member. Love this.

Thank you so very much Mariola for featuring this in 500 VIEWS 1 PER DAY. I'm just thrilled.

I really like this piece, it takes everyone back to the fight for Independence...nice job!

Wonderful historical piece! I so enjoyed reading about your technique and how you accomplish the look of the finished product!

lianne wonderful rendition of old fort Niagara! your special textures and effects add so much beauty to these old world works:) l/f

Roseann and Dan, I want to than you so very much for featuring this painting in your fabulous groups - DIGITAL ART AND RESOURCES and PREMIUM FAA ARTISTS. It's an incredible honor to be featured with so many extremely talented artists.

I've fallen a bit behind in my thank yous to hosts for featuring this image in their wonderful groups. Thank you so much William, Eti and Jouko for your features in BEST IMAGE PROMOTION, DAILY DOSE OF WISDOM and ART FROM THE PAST.

Wonderfully done and super special on 9-11 love this as I do allllll your art.. Sherri fl

Wow this is so amazing Lianne!!! L

My most sincere thanks to Nadine and Bob and Sharon for featuring this painting in their fabulous groups - ARTIST NEWS and SIGNATURE STYLE ART. I'm just thrilled by that and very honored.

Absolutely stunning and impressive as always, Lianne! Your work is always top-notch! It looks like this day in history (as Americans we would like to forget, but the British would like to remember!), could almost leap off the page, it looks so real! This is awesome! Fave! L/F/FB!

My deepest thanks to Kiki Art, Lisa and Chuck for featuring this painting in your wonderful groups - DIGITAL ART AND FABULOUS FRACTALS, IN THE MOOD and AAA IMAGES. I can't tell you how much that means to me.

Wow ! Fantastic creation, Lianne ! You so wonderfully recreated this historical scene into such a gorgeous artistic manner. Great work ! f,l

So much talent you have Lianne.. and I marvel at your work of art here. :-) fv

Tina thank you so much for featuring this painting in your amazing group ARTISTS BEST FIVE ARTWORKS. I'm just thrilled and very honored.

Fantastic work Lianne! I love the textures and the light and clarity are perfect. Excellent!!! L/F!

such a wonderful work Lianne! This is gorgeous in detail..and presentation! I love the history you have provided as well :). l/f/t/g/pinned!!

so wonderfully depicted love this foray into American History the writeup was so informative and such a beautiful rendering of the scene....beautiful beautiful softness and sensitive use of media from you yet again!! Love it!1 fl

A wonderful tale. Somehow I missed seeing this when I visited Niagara Falls. I love the soft tones you have achieved for this historical artwork! F/L

Anne and Rebecca, I'm so grateful to you for featuring this painting in your wonderful groups DIGITAL REALISM and FABULOUS ART BOUTIQUE. I'm really very honored.