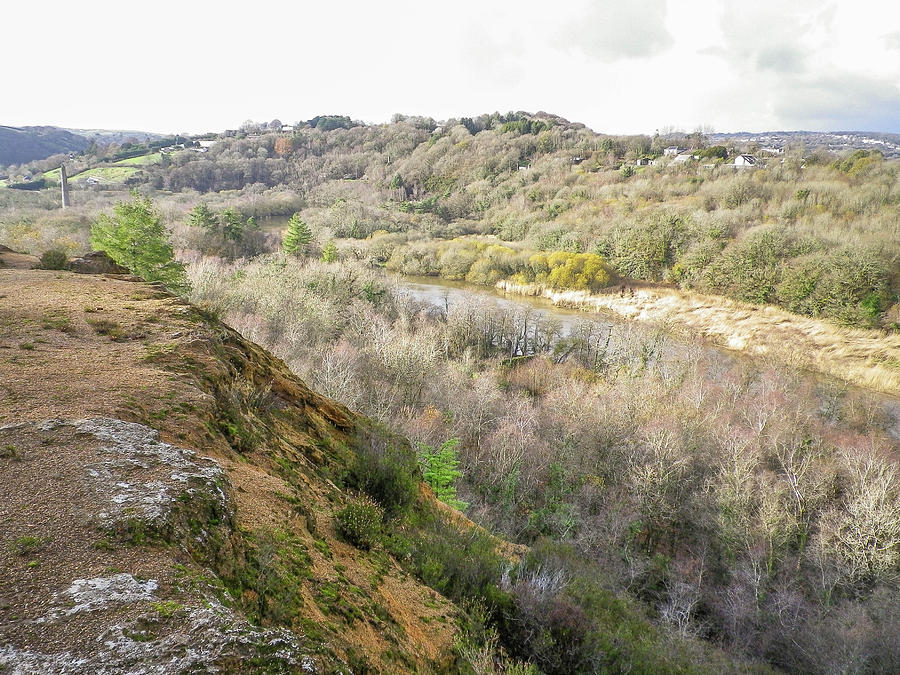 Stunning winter landscape across the River Tamar Valley, SW Devon, SW England, UK. Taken on the old Gawton mine spoil heap dumps in Devon looking across to Okel Tor (also Okeltor) mine in Cornwall (some old mine ruins can be just seen among the trees on the far bank to the middle top of the image). The lightning damaged chimney stack of the abandoned, neighbouring Rumleigh Brickworks can also be seen top left in the distance.

Gawton mine was a copper then arsenic producer mainly in Victorian times. Initially using water power, the mine later moved to steam power as technology advanced. Arsenic was mined from about 1846. In 1875 the mine merged with the nearby Bedford Consols mine, eventually being taken over by Devon Great Consols in 1895. Production noted between 1852 and 1902 was 21,876 tons of 4.5% copper ore, 22 tons of black tin, 1,435 tons of pyrite, 3,000 tons of mispickel and 15,650 tons of arsenic. Four main engine shafts have been noted, being Gawton, Bayly's, Fuller's and Sim's.

Associated ore processing areas were built including crushing plants, buddles, Brunton Calciners, labyrinths and flues to extract the arsenic. One very long arsenic flue was built and runs for several hundred metres up along the steep hillside to a famously bent chimney stack which still dominates the skyline. An inclined plane with wooden tressles was used to haul material up and down the hillside. The mine reached 130 fathoms (780 feet or 237metres) from surface at its deepest point. Estimates suggest the spoil heaps contain around 124,000 tons of material.

A quay was built alongside the river. Some of the ruined quayside buildings can be seen in the middle of the image. The works closed in 1902 and now the whole abandoned site is overgrown and is being well reclaimed by nature and wildlife.

Okel Tor mine on the opposite bank of the River Tamar, near Calstock in Cornwall operated between about 1845 and 1887. Copper tin and arsenic were mined.

These sites and many other ones in this area stand as a testament to Victorian entrepreneurship, engineering, and ingenuity. The global importance of the Cornwall and West Devon mining area has been recognised and is protected under monument scheduling in the UK and also it is part of the UNESCO World Heritage Mining Landscape (no. 1215).

CONGRATULATIONS! It is my great pleasure to FEATURE your amazing artwork on the homepage of the Artist Group No Place Like Home, 3/3/2019! You are invited to post it in the Group's Features Discussion thread for posterity or any other thread that fits!

Many thanks Jenny, that's really appreciated!

This is simply beautiful! L/F

Thank you Marian. It was quite breathtaking there especially with all of the muted winter colours - nature's desaturation!

Thank you Suma, much appreciated

Thank you, Richard, for showing me that Nature always reclaims the spoils and transmutes them back to beauty! Great capture!

A pleasure Laurel, thank you. It is heartening to see and yet poignant too I think.