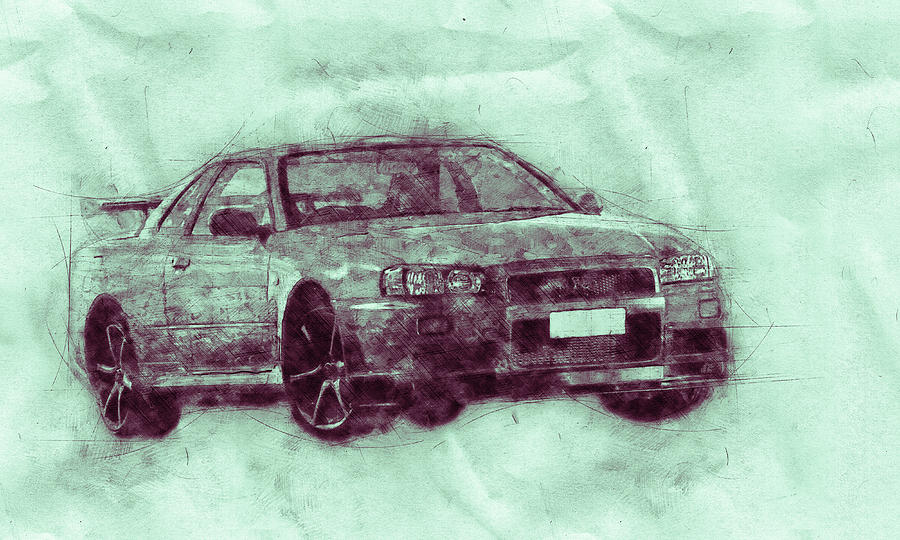 Nissan Skyline GT-R 3 - Spors Car - Automotive Art - Car Posters
Garage Art, Buy art online, Auto poster
The Nissan Skyline GT-R is a sports car based on the Nissan Skyline range. The first cars named "Skyline GT-R" were produced between 1969 and 1972 under the model code KPGC10, and enjoyed legendary success in local Japanese touring car racing. This model was followed by a brief production run of second-generation cars, under model code KPGC110, in 1973. After a 16-year hiatus, the GT-R name was revived in 1989 as the BNR32 ("R32") Skyline GT-R. This model GT-R proceeded to win the Japanese JTCC Group A series championship four years in a row. The R32 GT-R also had success in the Australian Touring Car Championship helping the R31 Skyline GTS-R to victory in 1990 and winning alone in 1991 and 1992, until a regulation change excluded the GT-R in 1993. The formidable technology and performance of the R32 GT-R prompted the Australian motoring publication Wheels to nickname the GT-R "Godzilla" in its July 1989 edition.
The Skyline GT-R became the flagship of Nissan performance, showcasing many advanced technologies including the ATTESA E-TS AWD system and the Super-HICAS four-wheel steering. Today, the car is popular for import drag racing, circuit track, time attack and events hosted by tuning magazines. Production of the Skyline GT-R ended in August 2002. The car was replaced by the R35 Nissan GT-R, an all-new vehicle based on the V36 Skyline. Although visibly different, the two vehicles share similar design features and are manufactured in the same factory.