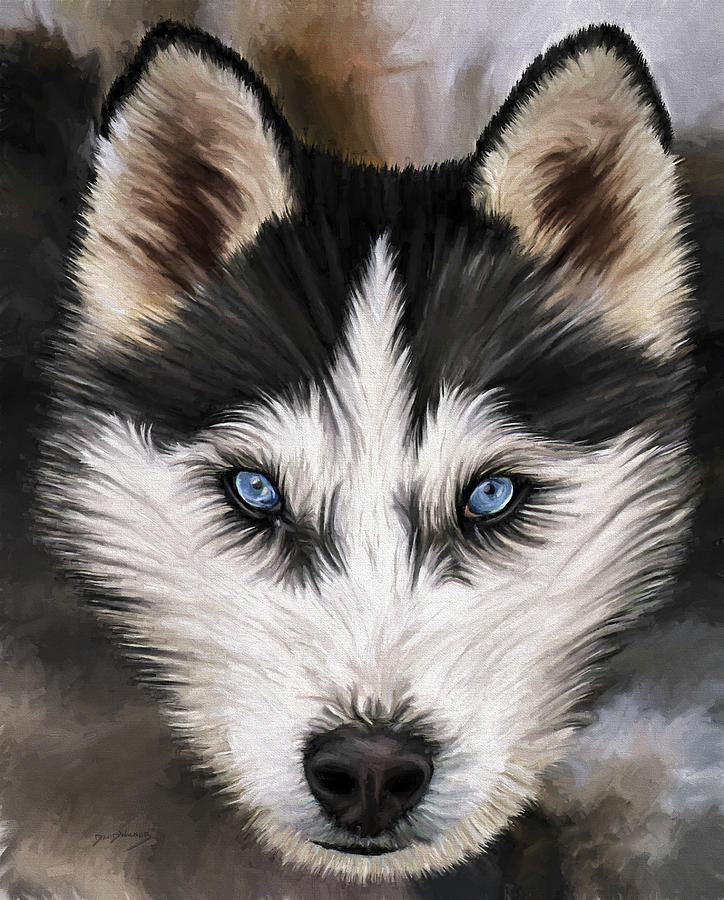 The Siberian Husky (Russian: ��� ��Sibirskiy Haski) is a medium-size, dense-coat working dog breed that originated in eastern Siberia. The breed belongs to the Spitz genetic family. It is recognizable by its thickly-furred double coat, sickle tail, erect triangular ears and distinctive markings.

An active, energetic and resilient breed whose ancestors came from the extremely cold and harsh environment of the Siberian Arctic and were bred by the Chukchi of Northeastern Asia, it was imported into Alaska during the Nome Gold Rush and spread from there into the United States and Canada, initially as a sled dog. It rapidly acquired the status of a family pet and a show-dog. A portion of the proceeds of any sales of my animal paintings goes to benefit animal rescue groups

Hi Carol, Thanks for the high praise and the great story about the intelligence of this amazing breed. And thank you for all that you've done to care for them.

Also, I love your painting, your Nikki looks so much like our Natasha but Tasha had one blue eye and one brown eye with a chip of blue. You really captured the spirit of the Sib.

Also, I love your painting, your Nikki looks so much like our Natasha but Tasha had one blue eye and one brown eye with a chip of blue. You really captured the spirit of the Sib.

God Bless you David, for supporting the rescues. I worked with a Purebred Siberian Husky Rescue, part of a local club in our area. These dogs are so smart, they can and often speak English. Three of ours learned to communicate what they wanted by words or short phrases, that even strangers understand what is being said. They are amazing, but not for everyone..... they jump fences, open gates and dig for freedom to run, so one that doesn't do these escape efforts is truly a one of a kind. Our first rescue, her name was Nikki and she got us hooked on continuing to rescue or foster the homeless Sibs. Again, You are a saint for looking out to help homeless animals. Also, thanks for posting the description as people go for their beauty, but know little about the breed. Balto is in the Cleveland Museum of Natural History (Ohio) and he doesn't look anything like these modern dogs. I cried when I saw him, he is so much a part of the breed history and history in general of how lives were saved.

David, i am in love with the uniqueness of this painting. great job :) ~Janell

David, So glad I found your site this morning. You have brightened my day by your talents. Shine on, from your new fan, Anne

like those blue eyes and the rendering of the hair!