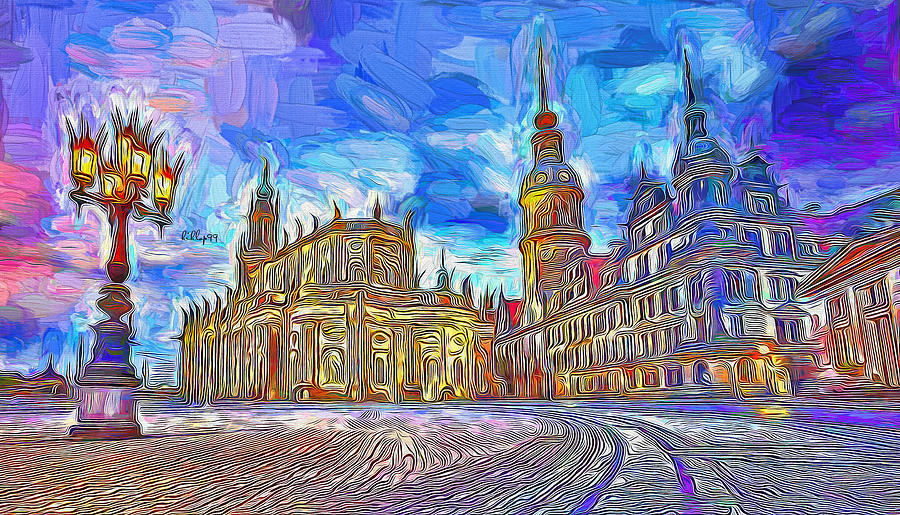 Dresden (/ˈdrɛzdən/, German: [ˈdʁeːsdn̩] (About this soundlisten); Upper and Lower Sorbian: Drježdźany; Czech: Drážďany; Polish: Drezno) is the capital city of the German state of Saxony and its second most populous city, following only Leipzig. It is the 12th most populous city of Germany, the fourth largest by area (following only Berlin, Hamburg and Cologne), and the third most populous city in the area of former East Germany, following only (East) Berlin and Leipzig. Dresden is contiguous with Freital, Pirna, Radebeul, Meissen and Coswig, and its urban area has around 780,000 inhabitants, making it the largest in Saxony.

he largest city on the River Elbe after Hamburg.[a] Most of Dresden's population lives in the Elbe Valley, but a large, albeit very sparsely populated area of the city east of the Elbe lies in the West Lusatian Hill Country and Uplands (the westernmost part of the Sudetes) and thus in Lusatia, while many boroughs west of the Elbe lie in the foreland of the Ore Mountains as well as in the valleys of the rivers rising there and flowing through Dresden, the longest of which are the Weißeritz and the Lockwitzbach.

The name of the city as well as the names of most of its boroughs and rivers are of Slavic origin. Dresden is the second largest city in the Thuringian-Upper Saxon dialect area, following only Leipzig. The Sorbian language area begins east of the city, in Lusatia.

Dresden has a long history as the capital and royal residence for the Electors and Kings of Saxony, who for centuries furnished the city with cultural and artistic splendor, and was once by personal union the family seat of Polish monarchs. The city was known as the Jewel Box, because of its baroque and rococo city centre. The controversial American and British bombing of Dresden in World War II towards the end of the war killed approximately 25,000 people, many of whom were civilians, and destroyed the entire city centre. After the war restoration work has helped to reconstruct parts of the historic inner city, including the Katholische Hofkirche, the Zwinger and the Semper Oper.

Since German reunification in 1990 Dresden has again become a cultural, educational and political centre of Germany and Europe. The Dresden University of Technology is one of the 10 largest universities in Germany and part of the German Universities Excellence Initiative. The economy of Dresden and its agglomeration is one of the most dynamic in Germany and ranks first in Saxony.[2] It is dominated by high-tech branches, often called “Silicon Saxony”. The city is also one of the most visited in Germany with 4.3 million overnight stays per year.[3][4] Main sights are also the nearby National Park of Saxon Switzerland, the Ore Mountains and the countryside around Elbe Valley and Moritzburg Castle. The most prominent building in the city of Dresden is the Frauenkirche. Built in the 18th century, the church was destroyed during World War II. The remaining ruins were left for 50 years as a war memorial, before being rebuilt between 1994 and 2005.

According to the Hamburgische Weltwirtschaftsinstitut (HWWI) and Berenberg Bank in 2017, Dresden has the fourth best prospects for the future of all cities in Germany.[5][6]

CONGRATULATIONS! This piece has been FEATURED on the homepage of the FAA Artist Group No Place Like Home, 4/19/2020! Way to go! Please post it in the Group's Features discussion thread for posterity and/or any other thread that fits!