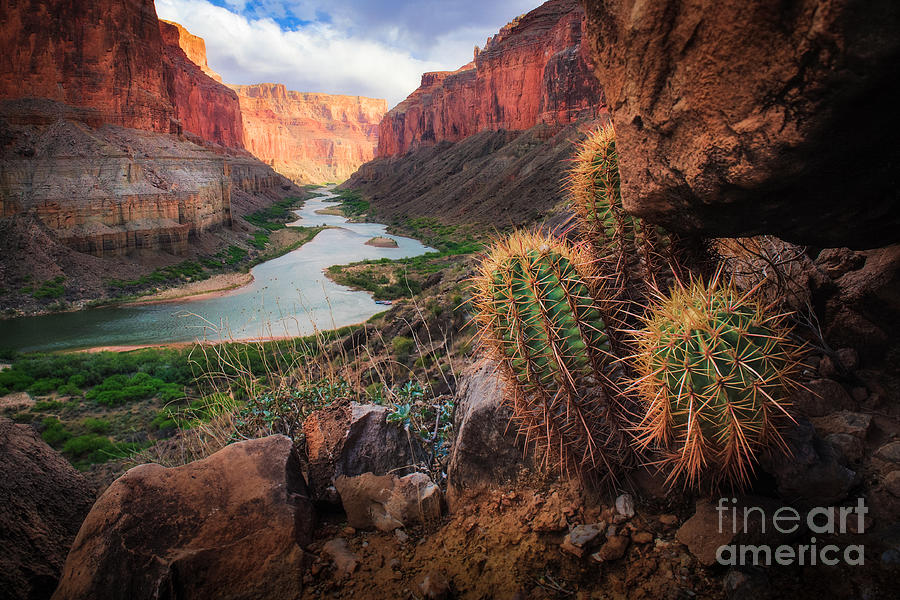 The Colorado River meandering through the Marble Canyon section of Grand Canyon National Park with barrel cacti in foreground
.....
Captured with a Canon 5D and a Canon TS-E 24/3.5L
.....
The Grand Canyon is a steep-sided canyon carved by the Colorado River in the United States in the state of Arizona. It is contained within and managed by Grand Canyon National Park, the Hualapai Tribal Nation, and the Havasupai Tribe. President Theodore Roosevelt was a major proponent of preservation of the Grand Canyon area, and visited it on numerous occasions to hunt and enjoy the scenery. It is considered one of the Seven Natural Wonders of the World.
The Grand Canyon is 277 miles long, up to 18 miles wide and attains a depth of over a mile. Nearly two billion years of the Earth's geological history has been exposed as the Colorado River and its tributaries cut their channels through layer after layer of rock while the Colorado Plateau was uplifted. While the specific geologic processes and timing that formed the Grand Canyon are the subject of debate by geologists, recent evidence suggests the Colorado River established its course through the canyon at least 17 million years ago. Since that time, the Colorado River continued to erode and form the canyon to its present-day configuration.
For thousands of years, the area has been continuously inhabited by Native Americans who built settlements within the canyon and its many caves. The Pueblo people considered the Grand Canyon ("Ongtupqa" in Hopi language) a holy site and made pilgrimages to it. The first European known to have viewed the Grand Canyon was Garcia Lopez de Cardenas from Spain, who arrived in 1540.
The Grand Canyon is a huge fissure in the Colorado Plateau that exposes uplifted Proterozoic and Paleozoic strata, and is also one of the 19 distinct physiographic sections of the Colorado Plateau province. It is not the deepest canyon in the world (Kali Gandaki Gorge in Nepal is far deeper), nor the widest (Capertee Valley in Australia is about 0.6 mi wider and longer than Grand Canyon); however, the Grand Canyon is known for its visually overwhelming size and its intricate and colorful landscape. Geologically it is significant because of the thick sequence of ancient rocks that is beautifully preserved and exposed in the walls of the canyon. These rock layers record much of the early geologic history of the North American continent.

Congratulations. This is a beautiful image. When I look at it I feel peaceful.

Congratulations, for the Homepage Feature, in the Art Group, "BEAUTY OF ARIZONA," for the week of Friday, (10/23/20)! You are welcome to submit your featured artwork in the Group's discussion thread “2020 Thanks and Features Archive October-December." Thank you for sharing your artwork and being a member of the group. like/fave

Beautiful! I used to have a little one like this just a few inches high! Congratulations on your sale!

Congratulations on your tie for 3rd place in our Cactus contest sponsored by the Spirit of the West Photographs only group!

Inge, your work is always excellent. What a great landscape image.

Inge! Congratulations on beautiful art and this successful sale!

Hi there, A few years back I purchased a digital print from a photographer on this website so that I could have it put on canvas locally as I live in Canada. Do you have this option to purchase a digital copy of this beautiful print? Thank you.

Congrats on your 2nd finish in the "Arizona Elite" contest! Beautiful shot! l/f

Congratulations on your win in the Arizona Elite contest beautiful image!

congrats on 2nd place in the "Arizona Elite" contest!

What a beautiful picture!

Congratulations Inge, your work is Featured in "Photographic Camera Art" I invite you to place it in the group's "2019 Featured Image Archive" Discussion!! L/Tweet

Beautiful light and composition - and scenery!