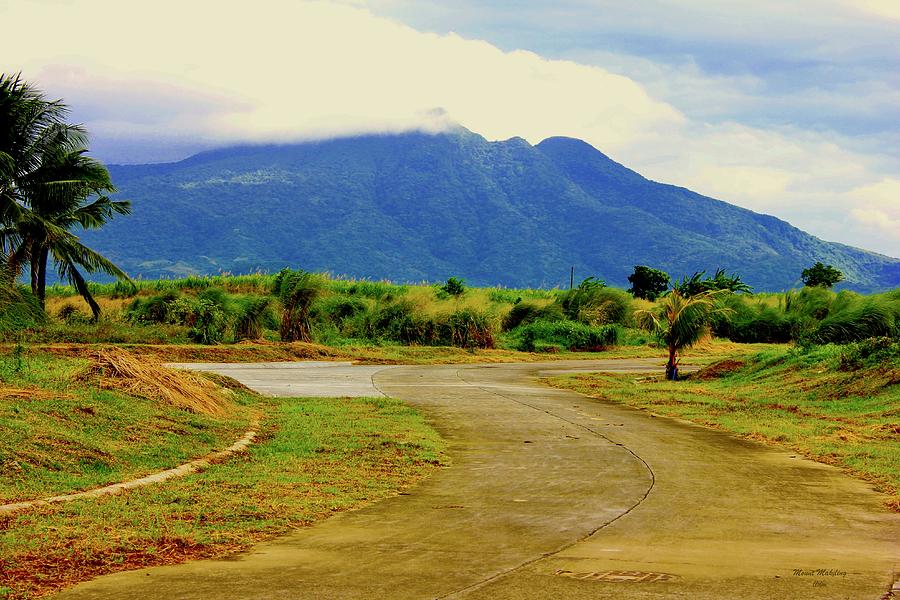 This photo was captured from Asenso Village in Ciudad de Calamba, Philippines by LLDM.

The place was so beautiful and charming. We considered the place as one of the tourist destinations in the Philippines. Because of its intact beauty and natural resources. One of the most popular places in Calamba Laguna.

Mariang Makiling is the guardian spirit of the mountain, responsible for protecting its bounty and thus, is also a benefactor for the town people who depend on the mountain's resources. In addition to being a guardian of the mountain, some legends also identify Laguna de Bay - and the fish caught from it - as part of her domain.

A dormant volcano, which is 1,109 meters above sea level, is named after the mountain's diwata named Makiling. A diwata is a female divinity that is a guardian of nature. Some call her Maria Makiling, Diwatang Makiling, or simply Makiling. She is both revered and feared. The Mountain itself is said to be in the form of "Diwatang Makiling herself" in a reclining position.

The phenomenon is described as true from several different perspectives, so there is no single location associated with this claim. The mountain's various peaks are said to be Maria's face and two breasts, respectively, and her hair cascades downwards a gentle slope away from her body.


Thank you very much for reading hope you enjoy.

If you have time you can visit online our other online stores at Zazzle.
Our website: http://www.zazzle.com/csmaza*
Or just click the link "Zazzle" below my profile.

Your beautiful artwork has been featured in the "Travel Art" group's front gallery! For further exposure, please see the Social Media links on our home page: https://fineartamerica.com/groups/1-travel-art.html

Thanks for the featured, Asian Artists.

Thank you very much.

Lorna, Fantastic scenic photo,love the great details in the foreground and background. This photo has so much great depth to it that the road brings you into the photo and then you are taken back by those gorgeous mountains in the background. Great clarity in this photo also. Excellent photo, fav, voted, google and tweet promoted and selected as my Pay It Forward in the Self Taught Artist group

How nice to hear those wonderful uplifting words that made me go on to the next level. Thanks John!

Thanks for liking and voting Lea.

Thank you so much Sandl.

Thank you very much Joan.