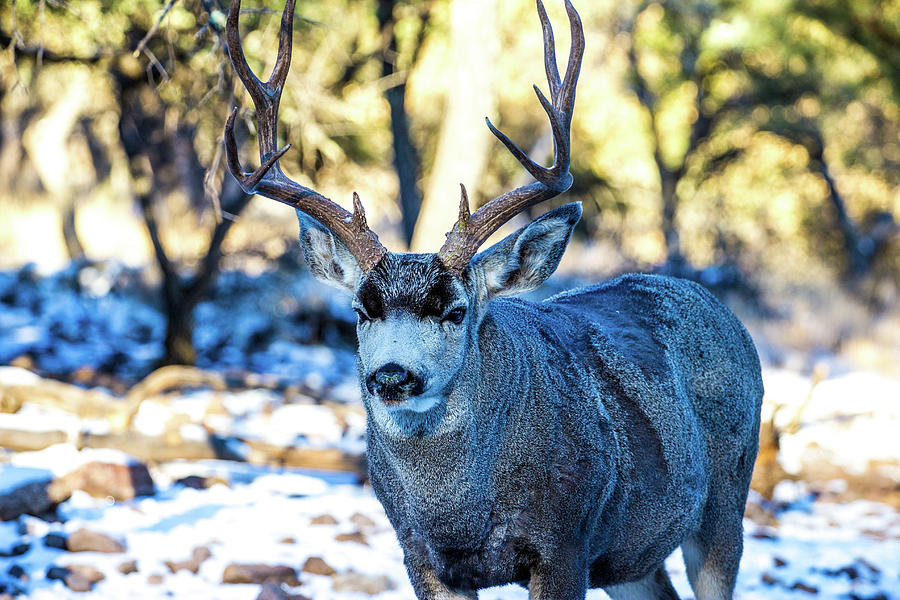 A Chihuahuan desert, west Texas, mule deer buck standing in the shadows from the morning sun and melting snow in the background. Over the years he will shed his antlers and get larger until he reaches full maturity, then will start declining antler quality. The west Texas mule deer is a smaller sub species, Odocoileus hemionus crooki, tending to have smaller bodies and antlers.
Deer, both muledeer and whitetail roam the mountains of west Texas. The Davis Mountains host a wide variety of flora and fauna. Located near Fort Davis, Marfa, McDonald Observatory, and the Hobby Eberly Telescope there is much to see and do in the area.

"Between November and February (depending on the locality), bucks that are evenly matched in size and strength engage in battles for the right to mate with females. They lock antlers and fight until the point of exhaustion, when one will back down and flee from the victor. These victorious bucks attract females to them and attempt to defend them against the attention of other (often younger) bucks. Sexual maturity is attained at the age of about 18 months in does, but young bucks are not allowed to participate in the rut until they are three to four years old.

The gestation period is approximately 200 to 210 days, and the fawning period extends over several weeks in the summer. The female sequesters herself and drops her fawn in a protected spot, where it remains for a period of a week or 10 days before it is strong enough to follow her. At birth, fawns are spotted and weigh approximately 5.5 pounds (2.5 kilograms). The young ones are weaned at about the age of 60 or 75 days, at which time they begin to lose their spots. Mule deer usually live 9 to 11 years in the wild."

Congratulations on being featured in the FAA Group â€˜The Outdoor Photographer' To ensure your feature remains available over time, post your featured images in the Group's 'Thanks for the Feature / photo archive