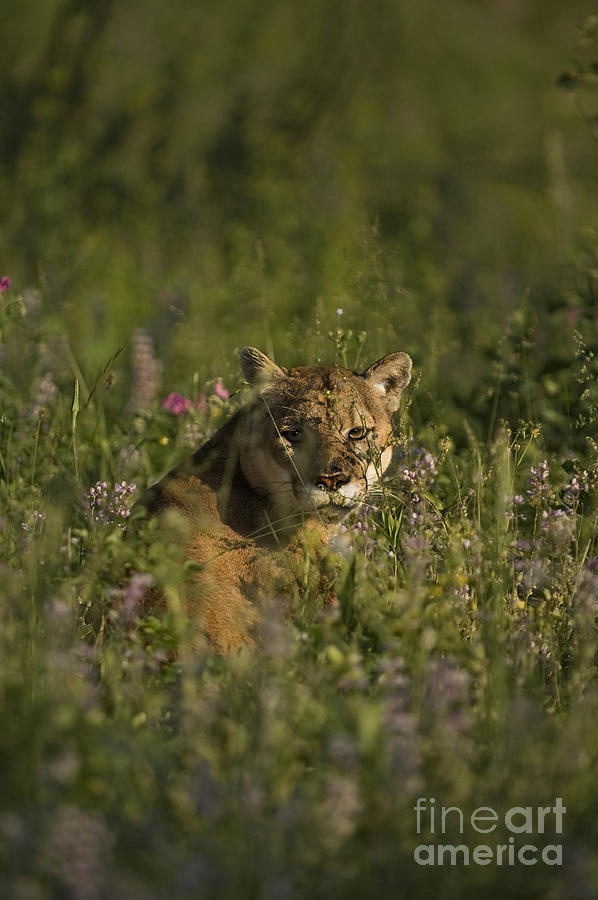 A mountain lion stalking prey and using the tall grass as cover. the nature of these big cats are often in a stealth mood. They notice motion excellent. Cougars can leap about 7 to 8 feet from sitting still up to 16 feet straight up when in motion.
They tend not to jump this high due to the fact it takes so much energy , this ability helps them
escape from cavernous traps. A 20 plus foot jump across is no problem.
The mountain lion (Felis concolor), also called the cougar,
is the largest member of the cat family living in Yellowstone National Park.
There is a difference in the structure of the voice box or the larynx, because of which the Cougars can't roar.
They produce a high pitched scream. This shrill scream has earned them a place in American folklore.
Facts- Young mountain lions have spots all over them, but adults do not!.They are covered with
blackish brown spots and have dark rings around their tails. The markings fade as they mature.
The cougar (Puma concolor), also known as the puma, mountain lion, panther, or catamount, is a largest
cat of the family Felidae native to the Americas.
The cougar is an apex predator whose strong jaws, large claws and exemplary stalking abilities
make its preferred prey some of the largest in America � elk, deer and moose. When forced to,
by weather or scarcity, the cougar will take smaller prey. The female cougar will also teach
her young on smaller prey, allowing them to hunt with her from when they are 6 months old to
about the age of 1 for males, 2 for females, when the kits leave to find their own territory.
Seeing or hearing a wild mountain lion is rare. Mountain lion sounds, which are typically a "screech" or "scaw", are often mistaken for other predators, usually owls or eagles. Mountain lion cubs will call to their mother in sounds similar to a high pitched yelp.
Interestingly, a study was performed in the 1970s by the California Department of Fish and Game,
which found that mountain lions hung out in

Its just beautiful Robert! Thanks for sharing what you see! l/f

Thanks for the FAV JAN !

Thank you very much Chellie !

Amazing shot! I've only seen tracks near our cabin!

Robert, I must admit that if I could somehow get just one shot that is like just one of your very many outstanding photos, I would treasure that photo and consider it to be my "once in a lifetime shot." But you do it time and time again; your work is exceptional!

Mark, that's a great comment I'm honored to receive. Thank you very much !

Robert----wow---looks like an 'up close and personal' shot. Interesting description-----and nice to be reminded of the 7 to 8 feet leap from sitting position. lvf