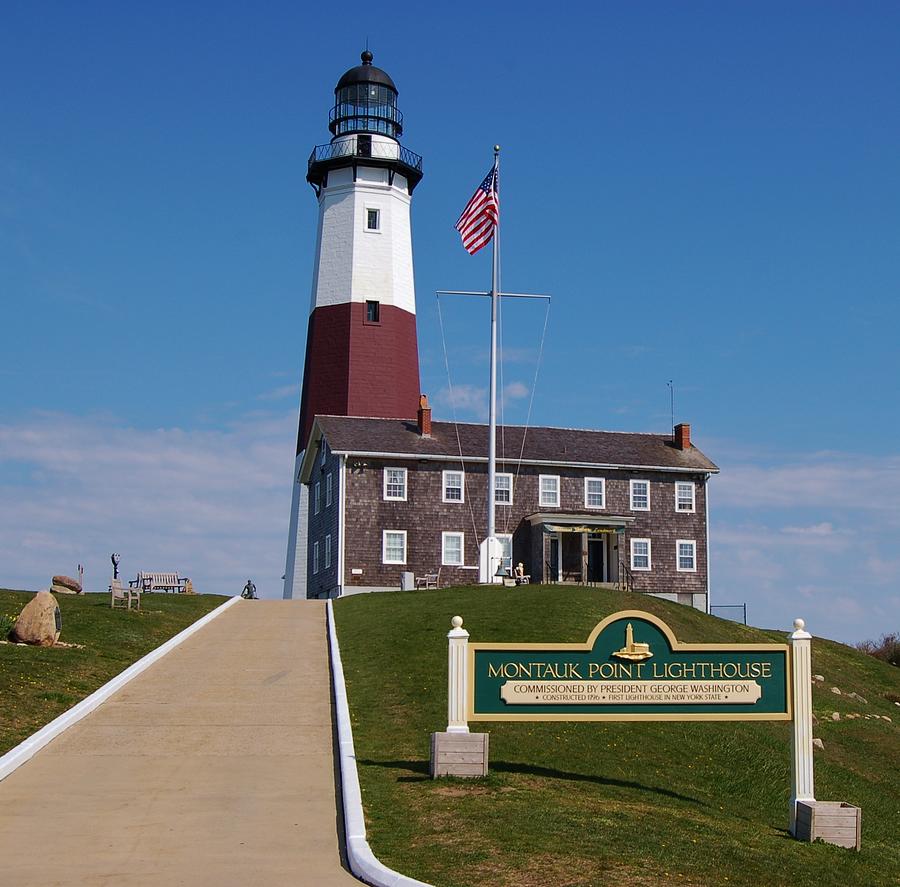 Montauk Light was the first lighthouse in New York State, and is the fourth-oldest active lighthouse in the United States. The tower is 110'6" high. The current light, installed in July 2001, equivalent to approximately 290,000 candle power, flashes every 5 seconds and can be seen a distance of 17 nautical miles (31 km).
Construction on the lighthouse was authorized by the Second United States Congress, under President George Washington on April 12, 1792. Ezra L'Hommedieu, a prominent lawyer, member of the Continental Congress, and a man with scientific interests, consulted with Washington on its construction. He represented the New York City Chamber of Commerce on discussions related to the lighthouse. He made the case that New York City "was first among American ports in the volume of its foreign commerce. By 1797, the harbor was handling a third of the nation's trade with other countries. Due to prevailing winds in winter, shippers approaching from sea needed a lighthouse at the end of Long Island to guide them along the south side into New York harbor.

Thank you very much Regina.....

Magnificent portrait of this majestic lighthouse and landscape, Christopher! F/L

I have only seen one lighthouse. Hope to see more eventually. Revisiting this beauty. FL

There are many to see and plenty of them on the East Coast....

Thanks for the revisit Judy.....

Excellent capture of this beautiful lighthouse

Thanks for the revisit Suzanne....

Wonderful perspective of this lighthouse. L/F

Wonderful image Christopher! Congratulations on being chosen as the Special Member Of The Week in the USA Photographers Only group:-)

Congratulations on being chosen as the Special Member Of The Week in the USA Photographers Only group!

Thank Eddie for the vote.....greatly appreciated

Fabulous shot of this beautiful lighthouse!...L/T

Thank you Jasna for all your support......

Thanks all for the kind words.....

Thank you for all the kind words....