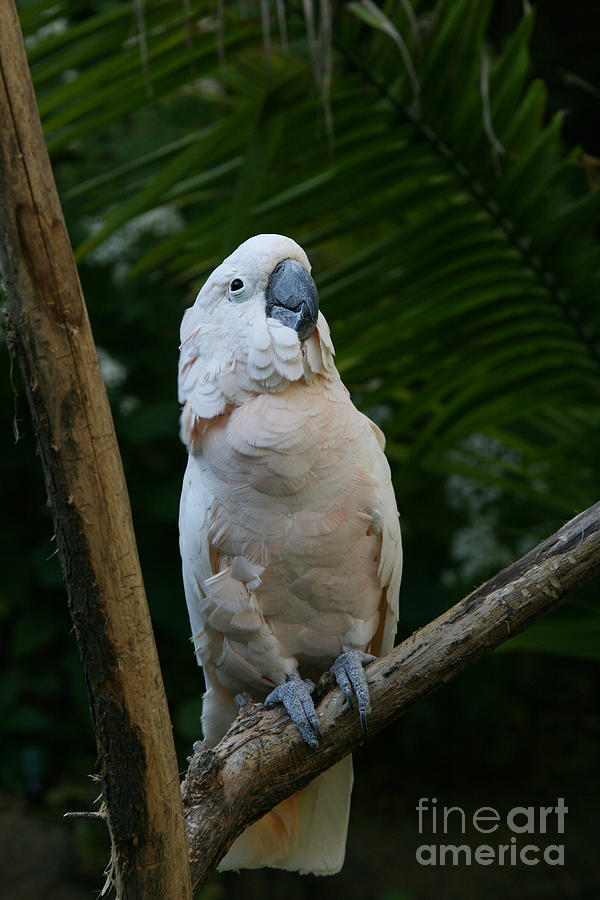 A Moluccan Cockatoo sitting in a dark tropical area.

The Salmon-crested cockatoo (Cacatua moluccensis) also known as the Moluccan cockatoo, is a cockatoo endemic to the south Moluccas in eastern Indonesia. At a height of up to 46-52 cm and weight of up to 850 g, it is among the largest of the white cockatoos. The female is larger than the male on average. It has white-pink feathers with a definite peachy glow, a slight yellow on the underwing and underside of the tail feathers and a large retractable recumbent crest which it raises when threatened, revealing hitherto concealed bright red-orange plumes to frighten potential attackers. It may also be raised in excitement or in other 'emotional' displays. Some describe the crest as "flamingo-colored." It also has one of the louder calls in the parrot world and in captivity is a capable mimic.

In the wild the salmon-crested cockatoo inhabits lowland forests below 1000 m. The diet consists mainly of seeds, nuts and fruit, as well as coconuts. There is additional evidence that they eat insects off the ground, and pet Moluccan cockatoos have tested positive for anemia if their diet does not include enough protein.

Judy, thank you for posting this heavenly capture in "Parrots" discussion on Poetic Poultry Group ;)

You are very welcome Anita!!

Thank you so much Anita for the feature in Poetic Poultry!!

Congratulations Judy, your work is Featured in "A Birding Group - Wings"!

Thank you so much Don for the feature in A Birding Group - Wings!!

Beautiful image of a beautiful bird!

Beautifully Shot Judy. I like the crispness of the bird and the emotions you've captured.