Mockingbird Have You Heard... 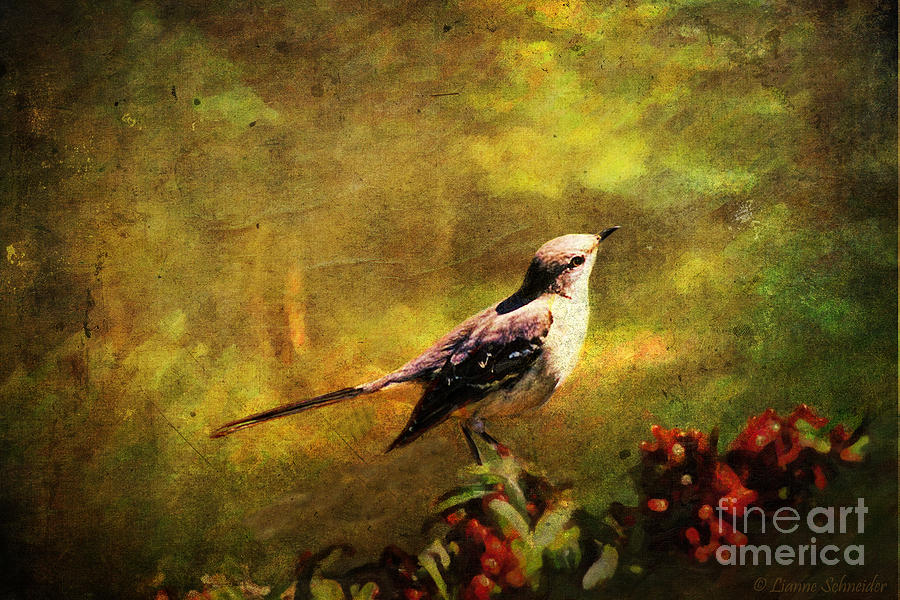 Mockingbird Have You Heard...

Another in my bird tapestry series - small prints would make a lovely grouping for a garden room.

Please forgive my inability to respond to all comments in a timely fashion. Believe me when I say that I appreciate each and every one of them more than you could know and I will do my best over time to visit each of you and catch up with your work too. I�m so very grateful for the constant support I�ve received from all of you.

If you�ve been hearing an endless string of 10 or 15 different birds singing outside your house, you might have a Northern Mockingbird in your yard. These slender-bodied gray birds apparently pour all their color into their personalities. They sing almost endlessly, even sometimes at night, and they flagrantly harass birds that intrude on their territories, flying slowly around them or prancing toward them, legs extended, flaunting their bright white wing patches.

COOL FACTS:
It�s not just other mockingbirds that appreciate a good song. In the nineteenth century, people kept so many mockingbirds as cage birds that the birds nearly vanished from parts of the East Coast. People took nestlings out of nests or trapped adults and sold them in cities such as Philadelphia, St. Louis, and New York, where, in 1828, extraordinary singers could fetch as much as $50.
Northern Mockingbirds continue to add new sounds to their repertoires throughout their lives. A male may learn around 200 songs throughout its life.
The Northern Mockingbird frequently gives a "wing flash" display, where it half or fully opens its wings in jerky intermediate steps, showing off the big white patches. No one knows why it does this, but it may startle insects, making them easier to catch. On the other hand, it doesn�t often seem to be successful, and different mockingbird species do this same display even though they don�t have white wing patches.
Northern Mockingbirds sing all through the day, and often into the night. Most nocturnal singers are unmated males, which sing more than mated males during the day, too. Nighttime singing is more common during the full moon.
Northern Mockingbirds typically sing from February through August, and again from September to early November. A male may have two distinct repertoires of songs: one for spring and another for fall.
The female Northern Mockingbird sings too, although usually more quietly than the male does. She rarely sings in the summer, and usually only when the male is away from the territory. She sings more in the fall, perhaps to establish a winter territory.
The oldest Northern Mockingbird on record was 14 years and 10 months old.

First verse of a golden oldie some of you may remember:

The soft warm light and beautiful textures make this such a beautiful work, Lianne. I absolutely love it! L/F

A great sense of depth on this! Wonderful texture work. L/F

This is gorgeous Lianne

Another vote. Love it.

I love how you capture the sweet birds in different moments and poses........the berries are lovely ......brilliant work Lianne!!

Thank you all so very much for your generous comments and for your visit. I hope I've managed to return your lovely gift in kind but if I haven't yet I will soon.

Another vote for this fave of mine, plus pin with acknowledgments.

What a wonderful image this is, Lianne! I also enjoyed reading the fascinating information you provided about these amazing birds. L/F

This is so gorgeous! What a marvelous piece of work. I love everything about it!

Great work on this mockingbird Lianne!

Gorgeous Lianne…love the texture and composition, and color!! :) vf

Wonderful work! love the light, and your use of negative space! Well done!

This is wonderful! I love it and your style,

Wonderful work Lianne love your textures and the lighting v/f

Such a wonderful antique look to this beautiful work!

Beautiful use of texture it enhances the composition so nicely

My absolute heartfelt thanks to everyone who came by and left a message or a vote here - I consider each comment a gift that I treasure. I hope I've returned the gift in kind on your own work - if not yet, then very soon.

Larysa - thank you so very much for featuring this image in GET YOUR ART SEEN. I'm just so honored and pleased.

Thank you so much Ian - I really appreciate that.

Featured artist in GET YOUR ART SEEN for the week of October 27 to November 3. Four of your pieces are featured. Beautiful work.

Thank you so very much David - I'm really honored and so pleased by your visit and lovely comment.

Lianne, you have created a beautiful composition and indeed it would look so eye appealing in a grouping. However, it would enhance a wall standing alone. Love the textures! v/f/tw

Splendid image, Lianne, full of color and mysterious textures that delight. And what perfect harmony to give so much attention to the background, with the main interest in bottom front. Marvelously bold and daring! V/F

I've been incredibly negligent Greta - my apologies. And thank you!