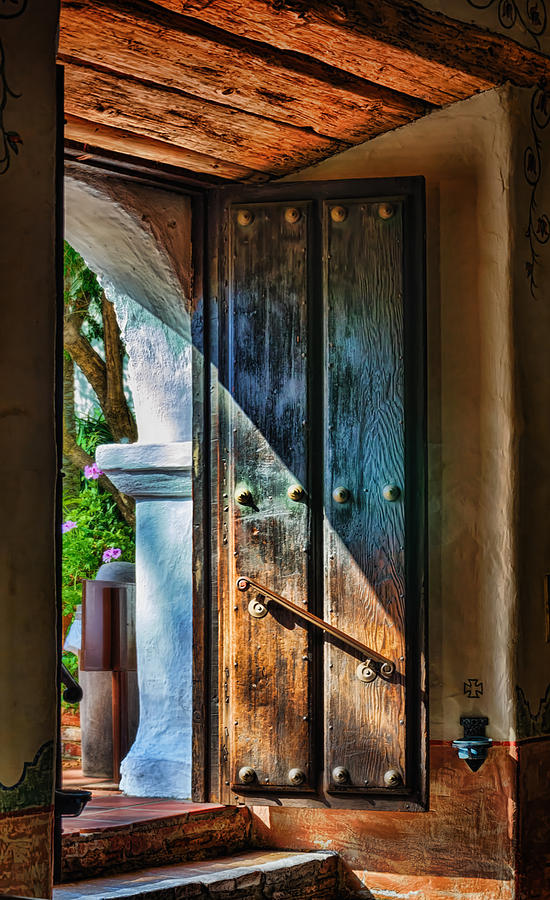 The hot afternoon sun pours through the doorway of the Mission BAsilica Sand Diego de Alcala. First of the 21 missions and known as the Mother of the Missions, Mission San Diego de Alcala was founded on July 16, 1769 by Blessed Junipero Serra. The mission system arose in part from the need to control Spain's ever-expanding holdings in the New World. Realizing that the colonies would require a literate population base that the mother country could not supply, the government (with the cooperation of the Church) established a network of missions with the goal of converting the natives to Christianity; the aim was to make converts and tax paying citizens of the indigenous peoples they conquered. After its religious beginnings, the mission withstood a period of secularization under Mexico and the United States during the 1800s but was returned to religious use in the 1890s. It was designated as a Minor Basilica in 1976 by Pope Paul VI. The Mission today is an active Catholic Parish in the Diocese of San Diego. The missions are among the state's oldest structures and the most-visited historic monuments.

SECOND PLACE FINISH, The Great Key Contest From Around The World contest, 7/18/13

FEATURED PHOTO, All Natural Beauty of this World group, 5/13/13

One of your peers nominated this image in the 1000 views Groups nominated images by your fellow artist in the Special Features #10 promotion discussion. Please visit and pass on the love to another artist.

Saw this image in special features, Joan. It is just a superb photograph! L/f

Congratulations on your feature in the 1000 Views group! LF

Love the POV for this image...great shot Joan! L/F

This is so beautiful! Tweeting!

Congratulations! Your beautiful work has been featured in the Fine Art America group “Balconies Windows and Doors”! You are invited to archive your featured image for permanent storage and for viewing on the Discussions Page at: https://fineartamerica.com/groups/balconies-windows-and-doors.html?showmessage=true&messageid=3866502

Congratulations! Your beautiful work has been featured in the Fine Art America group “FAA- Pixels All Stars”! You are invited to archive your featured image for permanent storage and for viewing on the Discussions Page—topic name: “3c--Open--FEATURED IMAGES to Archive & Thank You Thread - OCT. & NOV, 2017”. Simply copy your image’s URL, and paste it at -- https://fineartamerica.com/groups/f-a-a--pixels-all-stars.html?showmessage=true&messageid=3770140

thank you Mary Ann for the feature in the Balconies Windows And Doors group, 10/18/17

Love the rustic beauty of this image.

Nice edit on the post processing is what that should have said...lol sorry.

What a wonderful image! Love the quaint atmosphere you were able to capture and excellent edit on the l/f

I love this one! What a great view!

Joan, Fantastic detailed capture of the sun coming through this doorway. Great details and clarity in this image and congrats on all of your well deserved features, L/F

thank you Karen for the feature in the Lady Photographers and Artists group, 9/22/17

thank you Tina for the feature in the Artists Best Five Artwork Group Abfa Group, 9/22/17

Congratulations on your sale, Joan! Magnificent!

Congratulations on your newest sale Joan! :)

thank you Romuald for the feature in the Arts Fantastic World group, 9/18/17

Congrats on your sale

Congratulations! This is very warm and lovely.

Wow, this is gorgeous Joan. Congrats on your sale.