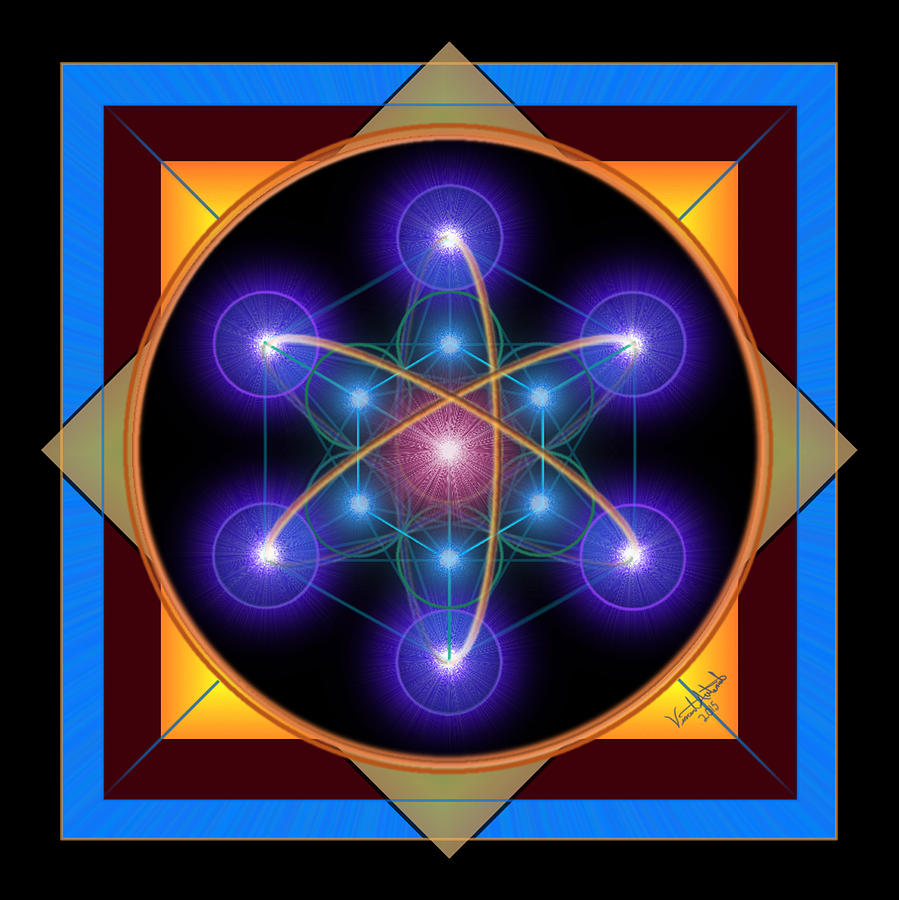 This image is based on the "sacred geometry" known as "Metatron's Cube" (a sacred geometric figure composed of 13 equal circles with lines from the center of each extending out to the centers of the other 12 circles). It is also commonly described as a variant of the "Flower of Life." The name "Metatron's Cube" makes reference to an angel named "Metatron" who appears primarily in mystical ("Kabbalistic") texts within the rabbinical Jewish tradition. In that tradition, he is the highest of the angels and serves as the celestial scribe or "recording angel" who keeps heaven's official records about everything that happens on Earth in human beings' lives, believers say, writing it all down in a place that some call heaven's "Book of Life" and others call the "Akashic records." Both names refer to the celestial record of all that has ever happened in the past, is happening in the present, and will happen in the future on Earth. The Zohar (the holy book of the mystical branch of Judaism called Kabbalah), describes Metatron as "the king of angels" and says that he "rules over the Tree of Knowledge of Good and Evil" (Zohar 49, Ki Tetze: 28:138). He is also mentioned in apocryphal texts including the Second Book of Enoch and the Book of the Palaces. These texts rank Metatron second only to God in the hierarchy of being. Some scholars including Johann Andreas Eisenmenger have portrayed Metatron as the means by which humanity was given knowledge of YHVH. This is one of a series of images I created based on Metatron and the Metatron Cube.

Thanks for shared here Vincent Autenrieb! Of this figure is impressive. Exactly! Cube of Metatron is derived from the Flower of Life and Metatron cube incorporates 13 information systems. The first is for Plato bodies / 6 /. Others are very complex. Drunvalo Melchizedek describes explanations in his book Flower of Life. All these figures help to remember who we are. They help us remember the ancient, forgotten knowledge that everyone has within himself in his soul. This geometry is not understood with the mind. It is understood intuitively from the heart. The three lines to and they are part of sacred geometry. I've seen them in my paintings, but not everything paint. Happiness and Blessings!