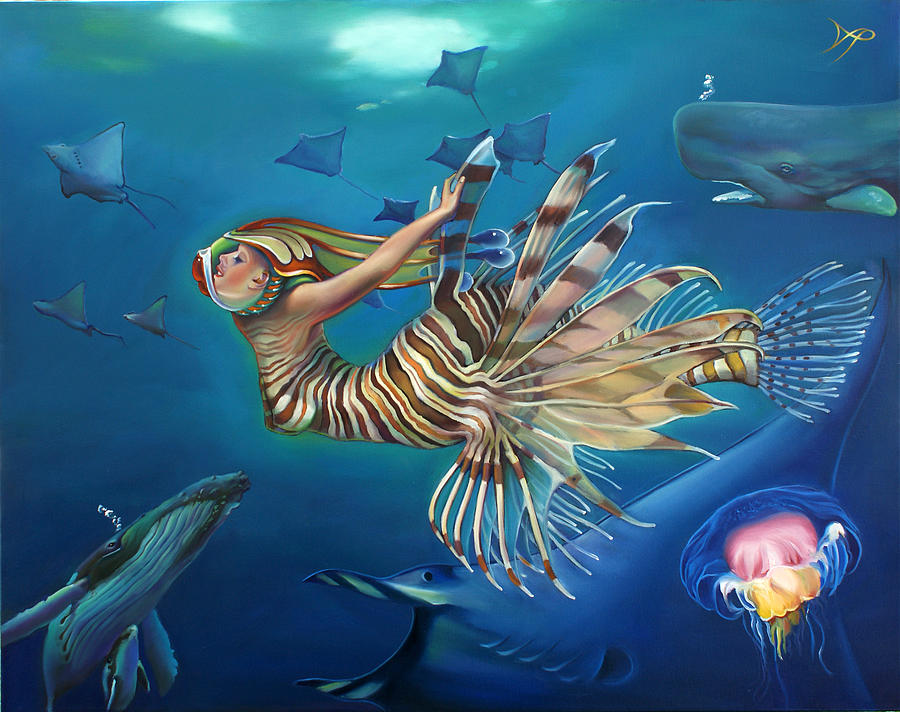 Propelled by an array of diaphanous fins, a gossamer tail and a delicate brace of webbed hands, the ever-curious mermalien streaked through the ocean with her constant companion, the Fin Cephalarvum. Irresistibly drawn to the bulk of a lone ship bobbing on the wind-whipped surface, she cautiously approached its darkly stained underbelly, then froze in horror at what she saw. With her fishified senses arcing in electric apprehension, she fathomed the crimson streaks on the vessel's planking were none but bloody smears. Now even more wary, the wayward mermalien broke the surface and summoned the telepathic aid of her symbiont escort. Images unfurled in her mind's eye and she caught the glint of sharpened steel smeared with whale blood, along side cauldrons bubbling with a greasy frothing brew. A shiver rippled through her body as curiosity trumped fear and she drew ever closer. Deftly tuning the tympanic membranes just behind the symbiont's gills, she sifted through a nearly ceaseless, chittering drone in the midst of the deafening crash of the waves and plucked from among it all the alluring voice of a young topsider. Rising and falling like the undulating swells over which they carried, his words filled the mermalien with the rapture of a stowaway just returned home. Hastily, the winsome girl drew away from the ship, took one last wistful look, then dove beneath the rough waves into the ocean's quiet sanctuary.

Thank you very much, Robin!

You're an Art-Genius, Patrick!* Fantastic imagination!

absolutely love this.the colors the movement it all works

Speechless! With all your work and stories! Sheer genius!!

This is outstanding Patrick!

from my 6 year old granddaughter," omg, that is so beautiful..how can he paint like that?!?!"

You are beyond words to describe you way of painting. love your mind and skills.

i am overly overwhelmed by your atenetion to the detail in both the art and the story....this painting has such a spirited flow. another masterpiece. you thrill me!