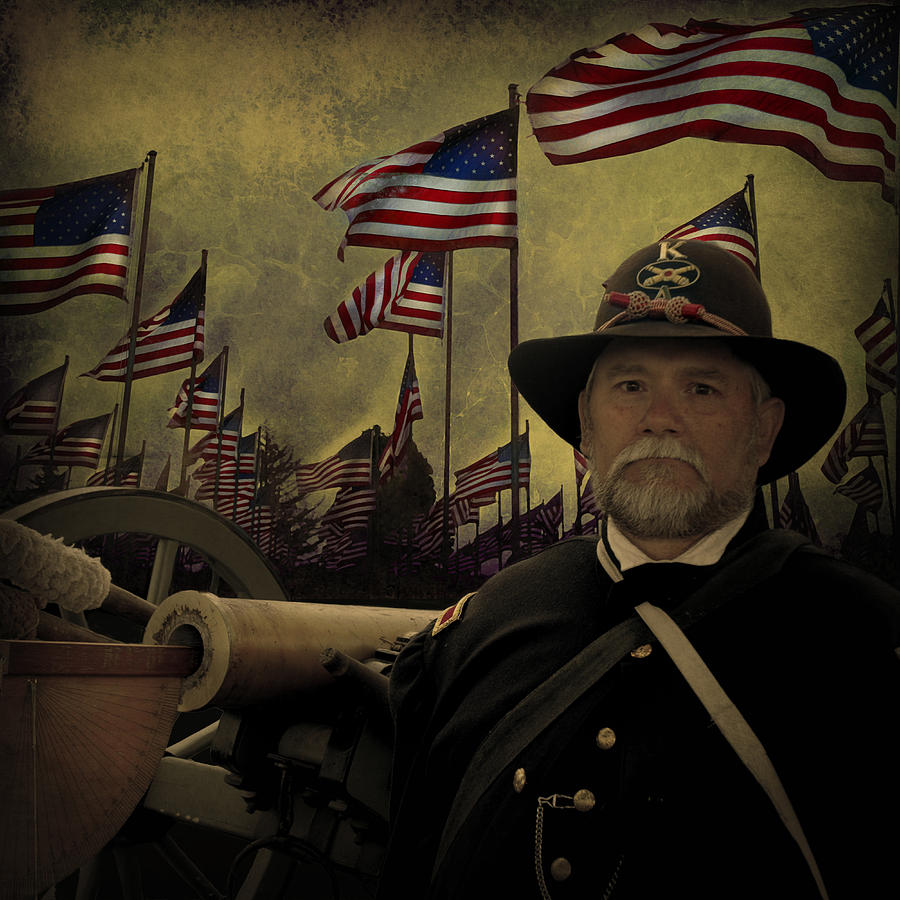 On a recent road trip back east I came accross a Lt. Ronald Evans, his wife and friends at a rest stop in Washington State. He is a Cammanding Officer of the Keystone Battery of Pennsylvania (Battery A, 1st Regiment Light Artillery 43rd Volunteers. Their reinactment group involves numerous folks who go around the country to remember and honor battles fought during the Civil War. Per the groups website, www.keystonebattery.org, the original Keystone Battery was organized in the early part of 1861 in Philadelphia, Pennsylvania as a volunteer infantry company and was drilled as such until the early part of 1862, when it was formed into a light artillery battery. Shortly after converting to artillery tasking, its services were offered to the federal government as an independent battery for one year of service. Their offer was accepted in August 1862. 1862 was a very difficult time for recruiting into military service, and the Keystone Battery was required to furnish 150 men to fully equip it. The Keystone Battery opened its enlistment rolls for two days and had nearly 500 offers to enlist, clearly demonstrating the Keystone Battery's popularity. For more information visit: The Civil War Archive, Union Regimental Histories, Pennsylvania, Battery "A", 1st Regiment Light Artillery (43rd Volunteers) (webpage)

The History of Battery A (Formerly known as the Keystone Battery) and Troop A, N.G.P., Compiled and edited by Logan Howard-Smith and J.F. Reynolds Scott, Philadelphia, The John C. Winston Co, 1912 (PDF file, 4.66 MB).

The flag image was taken in a small town in South Dakota. Unfortunately, I can't recall its name, but it was an impressive memorial to the fallen. Combining the images just made sense, although the stars on the flags represent today versus the number of states during the civil war. Memorial day is important in that those that have fallen in war are remembered. Folks in the USA also honor others that served this country during war and peace. This submission is my offering to the day.

The Keystone Battery was first deployed as part of the defenses of the city of Washington. The war had not gone well for the Union forces prior to the entry of the Keystone Battery: a major defeat had been suffered at Bull Run and the Union incursion into Virginia had been repulsed at Fair Oaks. There was real fear regarding the safety of Washington. Confederate generals Lee and Jackson were poised to strike northward.

Subsequent to the Civil War, the Keystone Battery was reorganized and admitted into the Pennsylvania National Guard. The unit saw action during the labor riots of 1877, the Spanish-American War, and the coal strike of 1902.

Thanks "Images that Excite" for the feature. It is much appreciated.

Thanks so much for the comment and l/f. Really appreciate it.

Thanks for the feature.

Happy Memorial Day to those in the USA

Politician or not-this deserves a vote. Your work is unique and captivating. Wonderful composition! v

Thanks so much. I appreciate your comment as well.

I am glad you like. Have to admit, though, when I receive a 'vote' I feel like a politician. (:

Thanks Paul. Much appreciated.

This is such a wonderful photo! voted

Thanks so much Joanne.

Thanks for the feature in Photography and Textures

Exceptional piece of work Jeff! Your lighting and texture work are perfection! V/F

Thanks so much Joan.

really, really like this - the darkness adds to the mood and the processing is fantastic.. :)

Thanks Artist News for the feature. I hope that this will lead to more comments and sales.

Thanks very much. A meaningful piece.

Thanks much Pamela. This gentleman was kind enough to let me take his picture and the background just seemed to be appropriate.

Let us not forget. Love it...vote

Yes. For sure. Thanks.

Thanks so much Barbara. Much appreciated.