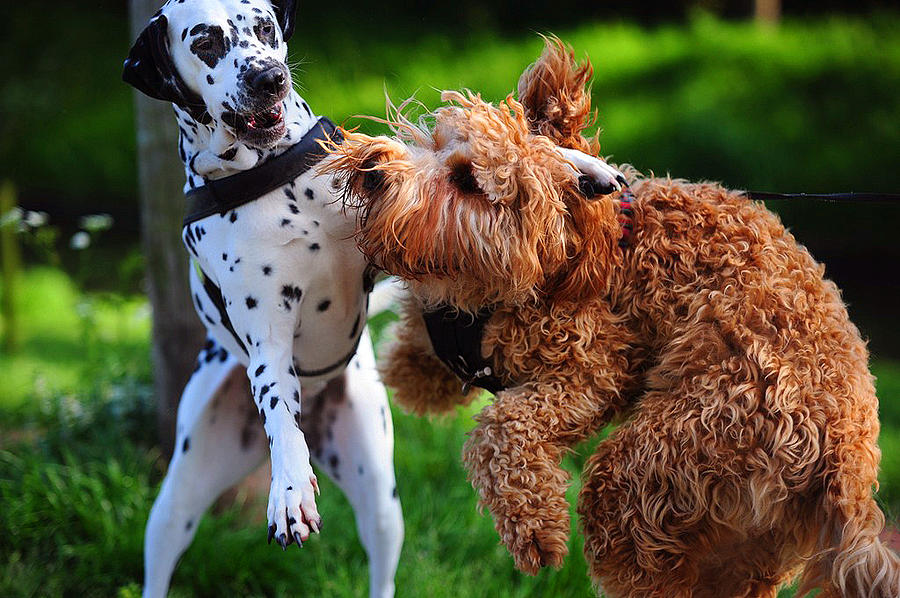 Kokkie love to met her friends and play with them, To ovserve it - its time to laugh, to photograph its a really great pleasure :-) Unfortunately I dont know well the breed of her friend and the name..

There is total disagreement about the origin of this breed. Spotted dogs are known throughout history in Africa, Europe and Asia. The breed may be related to the Pointer. Traces of spotted dogs are found in Egyptian bas-reliefs and Hellenic friezes, so it certainly is an ancient breed. In 1700 a dog known as the Bengal pointer, similar to the Dalmatian, existed in England, calling into question the Dalmatian's Yugoslavian origin. Some claim the Dalmatian is a Croatian breed. Efforts to have it recognized as a Croatian breed had been rejected, up until 1993, when the FCI did finally recognize the Croatian roots of the Dalmatian dog, although they continue to deny Croatia standard patronage rights over the breed. In the Middle Ages it was used as a hound. The breed became popular as a carriage dog in the 1800s. They trotted beside and among the horses and carriages, very reliably following their masters, guarding the carriages and horses while the master was occupied elsewhere. Very hardy with great stamina, it was able to easily keep up whether its master was on foot, on horseback, or in the carriage. The versatile Dalmatian has seen many uses, such as a mascot for firemen, war sentinel, draft dog, circus performer, vermin hunter, fire-apparatus follower, bird dog, trail hound, retriever, shepherd and as a guard dog.
Dalmatians were bred to run under or alongside horse-drawn carriages and therefore have a vast amount of stamina and energy. They do not like to sit around all day with nothing to do. They are playful, happy, easy going and very dedicated. The Dalmatian needs a lot of leadership along with human companionship in order to be happy. They will not do well left out in the yard all day and have been known to dig crater-size holes when done so. The Dalmatian enjoys playing with children, but if they do not receive enough mental and physical exercise they may become high-strung, and too excitable for a small child.

Kokkies friend on this pic is Cooper. Cooper is an 18th months old Australian Labradoodle. (medium sized) Its a hard job to catch him in full action, but you did it.... Looking forward to the new pics you made today during our encounter on the Welhoekse dijk. Grtz Pim Paparazzi.

LOL, what a great action shot of these two adorable dogs!!! :)))fv

Thanks a lot, Alexander!