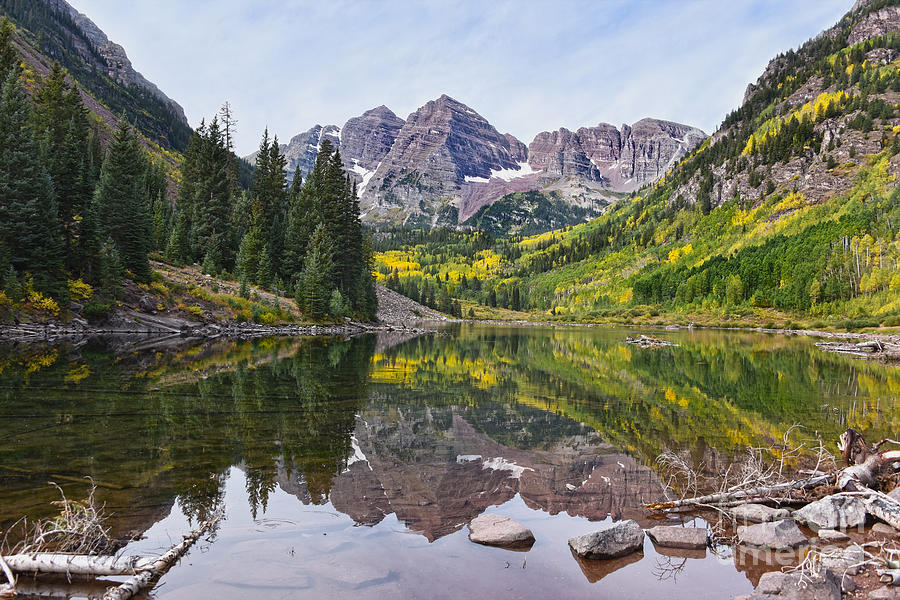 Autumn touches the aspens with gold on the flanks of the Maroon Bells in the Rocky Mountains of Colorado. The beauty is reflected in Maroon Lake.

The pair of mountains are magnificent at any time of year. It's no mystery why the Maroon Bells are considered the peaks that are most photographed throughout North America.

The Maroon Bells are two peaks in the Elk Mountains, Maroon Peak and North Maroon Peak. The mountains are on the border between Pitkin County and Gunnison County, Colorado, United States, about 12 miles southwest of Aspen. Both peaks are "fourteeners."
In the mountaineering parlance of the Western United States, a fourteener is a mountain peak with an elevation of at least 14,000 feet (4267 meters). There are 96 fourteeners in the United States, all west of the Mississippi River. Colorado has the most (53) of any single state; Alaska is in second place with 29.

Maroon Bells-Snowmass Wilderness was one of five areas in Colorado designated as wilderness in the original Wilderness Act of 1964.

Unlike other mountains in the Rockies that are composed of granite and limestone, the Bells are composed of metamorphic sedimentary mudstone that has hardened into rock over millions of years. Mudstone is weak and fractures readily, giving rise to dangerously loose rock along almost any route. A US Forest Service sign on the access trail warns would-be climbers of "downsloping, loose, rotten and unstable" rock that "kills without warning". The mudstone is also responsible for the Bells' distinctive maroon color. The Bells got their "deadly" reputation in 1965 when eight people died in five separate accidents.

Maroon Lake elevation 9,580 ft (2,920 m) occupies a basin that was sculpted by Ice-Age glaciers and later dammed by a landslide and rockfall debris from the steep slopes above the valley floor.

What an awesome composition with beautiful colors and reflections, Catherine!

Thank you very much, Jurgen!

Congratulations, Catherine – your fantastic fall colors nature scene has been featured by the Go Take a Hike Photography Group! Feel free to add it to the Featured Images thread in the group discussion board for archive.

Thank you for the feature, Larry!

Thank you very much, Lori!

A dynamic view of these beautiful mountains and reflections. l/f