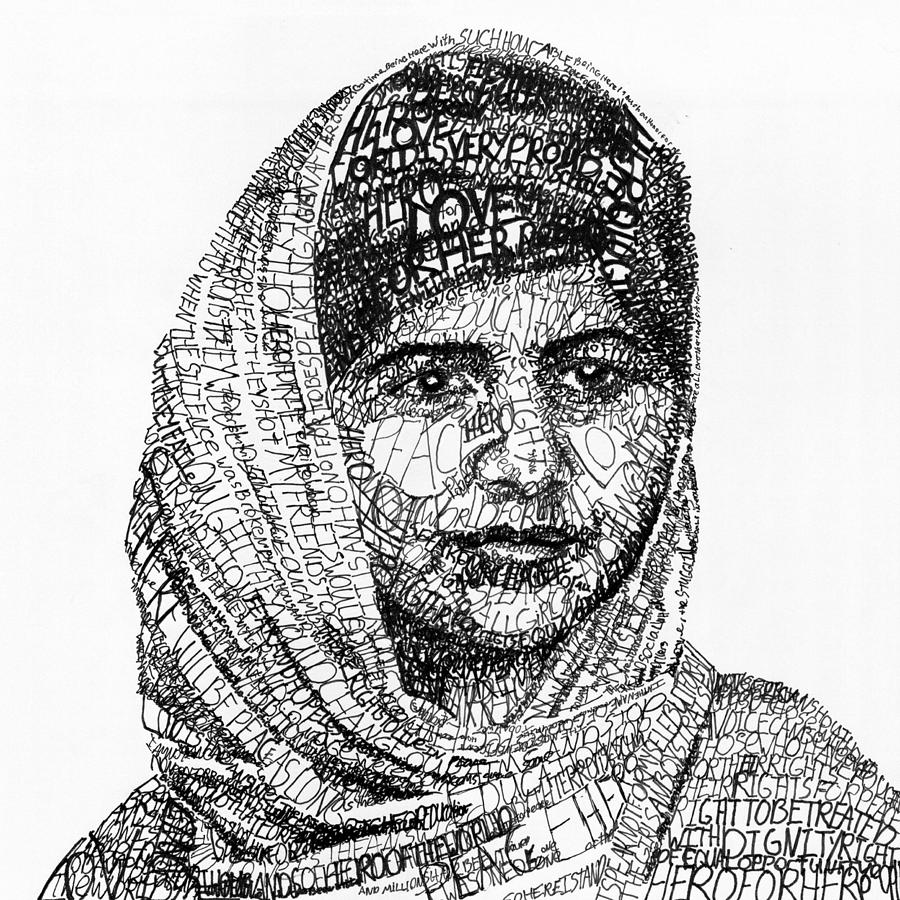 The last portrait is of Malala Yousafzai (my personal favorite). She is a 16-year-old girl that grew up in Pakistan, and her father was a teacher at a local school. Because her father promoted education for women he was put on a Taliban kill list. She would grow up in fear for many years that one night the Taliban would break into her home and kill her and her family. Instead of this fear controlling her she fought back by giving speeches on pro-education for female children at her school.That then put her on a Taliban kill list. One day the Taliban showed up at her school and shot her in the head.They had hoped to kill her, but instead they made her an international icon for education. After she was shot she was invited by the United Nations to give a speech to spread awareness of the endeavors women face in many Third World countries. In her speech she doesn�t condemn anybody or vow for revenge; instead, she tries to promote a message of love and mutual respect for all people regardless of color, race, religion, gender, or whatever else. I used the speech that she gave to the United Nations to create her portrait. I feel that her passion really speaks to all of us about who she is, and creates a better likeness than any painting of her face alone could provide.

Ohh, I love love Malala so much, and kudos,compliments on this gorgeous drawing,and words, f.v....VIVA

Stunninnly beautiful! Congrats on your sale!

Wonderful work! Congrats on your sale!

You captured her Spirit !! Congratulations on your Sale !!

I really love your work- it sure makes me L O O K close and see!

Excellent portrait of a brave woman.

A re-visit, Michael! Wonderful tribute to Malala! Definitely a FVL, from me. Such an amazing young woman. Thank you for creating this work of art!

I so love your beautifully rendered and candid portrait of this brave young lady!, Michael! I love how you have given us a glimpse of her gentle and loving spirit in both the portrait and description! She is an exemplary lady who demonstrates her understanding of how a woman can "fight" injustices done to her, and yet remain untouched by the evil that would seek to shut her down and remove her from their intended path of further destruction! But with God, who loves all of us, all things are possible! May God bless her and her family and surround her with His loving arms of protection! I wish you great success in getting your message across, Michael! Fave! L/F/FB/P!

So very talented! Beautiful! Congratulations on your sale Mr. Volpicelli!!!

Beautiful work. A young woman who is so special deserves all the attention she can handle. Congrats on your sale.

Congrats on the sell. Love the drawing very cool

Your 'Voices of Compassion' series are brilliant, Michael! like/fvt

I want his one too!

This is a moving tribute to a brave young woman.

Fantastic job on the Steve Harvey show & Fantastic artwork! Thanks for the links! lG from Twitter!

Michael, I saw you and your work on the Steve Harvey Show that my wife recorded for me. What a moment for you to have Steve tell you that your portrait of him was the best he had ever seen of himself. So happy for you and wish you the best success with your art career! FAV Jerry

It was an amazing experience! I was so nervous!! lol.

Awesome piece of an awesome human being!!! All the best!

Congratulation on sale announcement and wonderful.

Congrats on your sale.Excellent artwork.

From the subject to the typography this wok is inspired and beyond excellent. f/v

I am so happy that you honored Malala in this pencil drawing. It is truly a work of art and very creative. Great job! f/l

Thank you. She is a hero!

Outstanding work about an outstanding woman! And the conceptual style you have developed is really suitable for this kind of portrait.

Thank you very much! She is a hero of mine.

She is a part of a series I did called "voices of compassion" I would be happy to share the write up for the series with you if you would like!

I'm so glad this fantastic piece has sold! Congratulations.

Thank you for your kind words :)

Thank you for your words :)