M-18a1 Claymore Mine - Front Toward Enemy 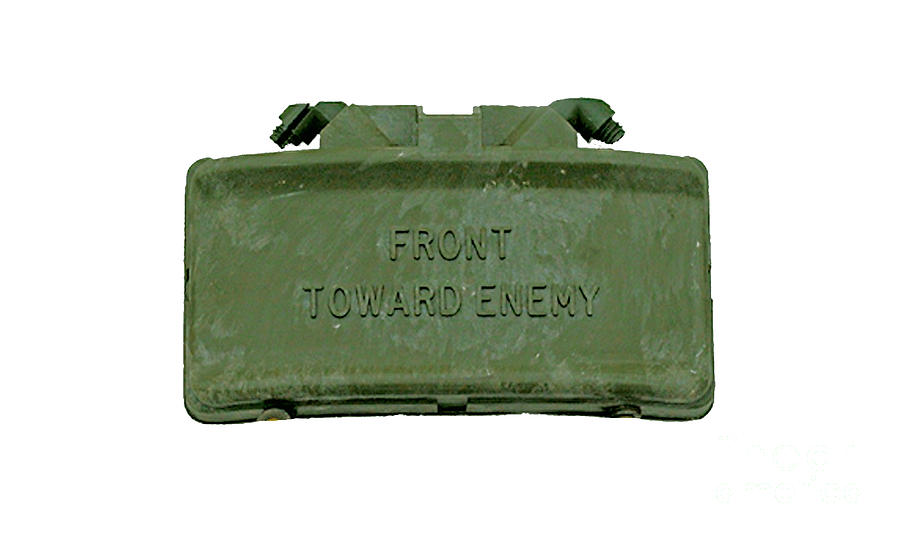 M-18a1 Claymore Mine - Front Toward Enemy

The M18A1 Claymore is a directional anti-personnel mine developed for the United States Armed Forces. Its inventor, Norman MacLeod, named the mine after a large medieval Scottish sword. Unlike a conventional land mine, the Claymore is command-detonated and directional, meaning it is fired by remote-control and shoots a pattern of metal balls into the kill zone like a shotgun. The Claymore can also be victim-activated by booby-trapping it with a tripwire firing system for use in area denial operations.

The Claymore fires steel balls, out to about 100 m (110 yd) within a 60° arc in front of the device. It is used primarily in ambushes and as an anti-infiltration device against enemy infantry. It is also used against unarmored vehicles.

Description
The M18A1 Claymore mine has a horizontally convex gray-green plastic case (inert training versions are light blue or green with a light blue band). The shape was developed through experimentation to deliver the optimum distribution of fragments at 50 m (55 yd) range. The case has the words "FRONT TOWARD ENEMY" embossed on the front of the mine. A simple open sight on the top surface allows for aiming the mine. Two pairs of scissor legs attached to the bottom support the mine and allow it to be aimed vertically. On both sides of the sight are fuse wells set at 45 degrees.

Internally the mine contains a layer of C-4 explosive behind a matrix of about seven hundred 1⁄8-inch-diameter (3.2 mm) steel balls set into an epoxy resin.

The weapon and all its accessories are carried in an M7 bandolier ("Claymore bag"). The mine is detonated as the enemy personnel approaches the killing zone. Controlled detonation may be accomplished by use of either an electrical or non-electrical firing system. When mines are employed in the controlled role, they are treated as individual weapons and are reported in the unit fire plan. They are not reported as mines; however, the emplacing unit must ensure that the mines are removed, detonated, or turned over to a relieving unit. The 100-foot (30 m) M4 electric firing wire on a green plastic spool is provided in each bandoleer. The M57 firing device (colloquially referred to as the "clacker") is included with each mine. An M40 circuit test set is packed in each case of six mines. When the mines are daisy-chained together, one firing device can detonate several mines.

The mine can be detonated by any mechanism that activates the blasting cap. There are field-expedient methods of detonating the mine by tripwire, or by a timer, but these are rarely used.

HMM I should borrow this from you and go after that virus myself.... :-) L/F

thats quite a story. L/F

Thank you Constance, I like to add a little write up when possible

Thank you for the much appreciated feature.