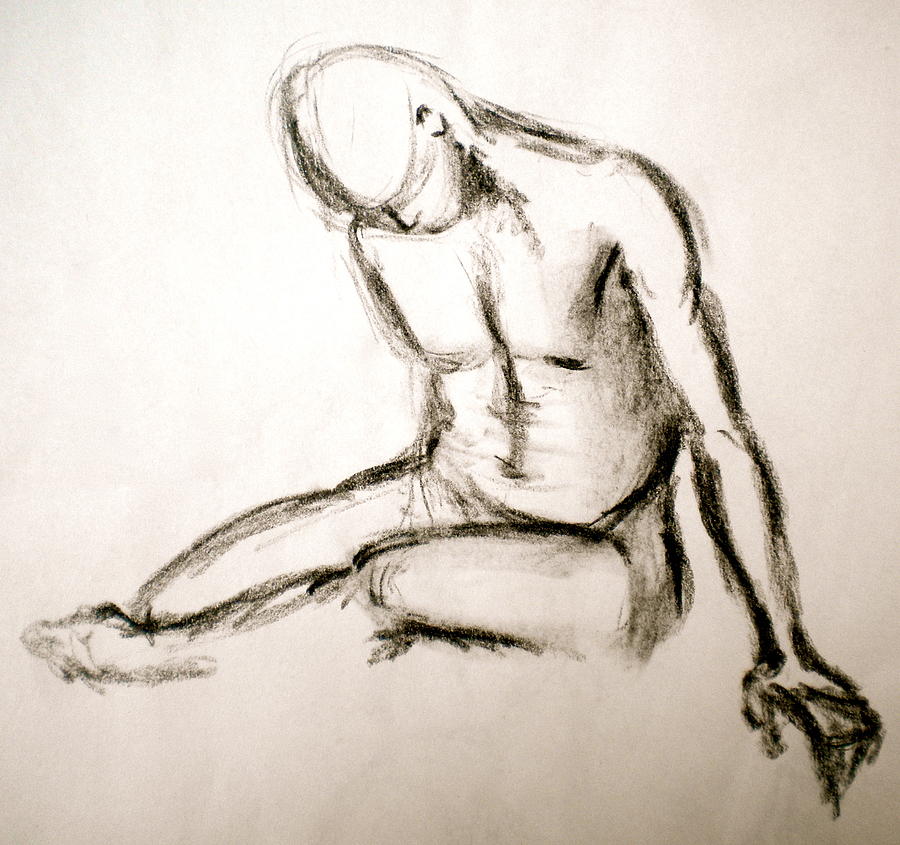 Lucky Charms by Debi Starr portrays a nude male model posing for a figure drawing open studio. He sits with his head bent down reflective in thought. This simple charcoal study is very classical in nature and the looseness creates an interesting energy. The lost edges engage the viewer and invites them into the space.
The title may seem off, but there's a funny story to go with it...
funniest thing ever and completely true...

Since I peaked some of your curiosity... First of all, since most of you don't know me, I have to say that I am an EXTREMELY animated person that LOVES to find the humor in most things and when I tell a funny story, I laugh so hard to the point of tears that you can not understand me, so I keep trying and the story gets funnier and funnier...
So yesterday, my very best friend, Carrie, and I went to an open studio figure drawing lab. It was only our second time to attend and the first experience was immensely hysterical as well. The first time we had a female model that would not shut up...I had never experienced a model that continuously talked to the artists, but it was fine and no big deal until she kept referring to one of her many schizophrenic episodes...we decided if we ever had her as our model again, maybe one of her other selves would show up, haha...
So we had no idea what to expect yesterday... Carrie and I arrived and began setting up our supplies. There were only eight artists there yesterday to draw, 4 men and 4 women, including Carrie and I. One of the guys was very good looking, but unfortunately he was not the model... the proctor came in to say that the model was running late and he was stuck in traffic. Carrie says," Yea, we get a man this time!" and then he shows up...a spry little man, like a leprechaun, really... he was very talkative and began removing his clothes energetically...which is also unusual because mostly the models would seem relaxed wearing a robe that they gently remove to pose... so he starts with one minute poses, two minute poses, etc and then all of a sudden, throws his arms out in a flamboyant gesture and says, "I had a girlfriend once, she would do this and then make a face."...more poses, then out of nowhere throws himself down, BOOM and says, "How's this one?"...more poses and then a crazy headstand yoga pose!...never had that happen before, more poses and then strikes a pose, and then completely random says,"THIS IS MY I HATE SPAGHETTI POSE" Try staying composed after that one, HAHA! We made it through our lab completely entertained and it was a lot cheaper than a comedy club!
As we were leaving and getting in the car, we saw the good looking guy leaving, too...Carrie and I turn to each other and say, "Lets go ask him when he's modeling!"
Obviously, we cant wait to go back next week to see what's in store...hopefully, I've entertained you...

With that being said, I had the intention to do a painting using this pose from class of the "Leprechaun Model"... in pastel tones and make it "magically hilarious"...we will see if that ever happens.

Congrats on the sale, Debi :-)

Working my way though Anne's thread. Nice work/great story; found it interesting that the image is sad with such a funny story behind it. F V T & G+ ... Elaine

thanks so much, Betsy

Lovely sketch. Your lines have a lovely movement to them :) V

thanks so much, Marcia

many thanks Pedro, greatly appreciative :)

Great job on the nude leprechaun checking to see if his 'lucky charms' are still there! Hilarious story...wish I'd been there! :D

thanks so much, Vicki

Features will be posted tomorrow, Debi....

Congratulations, you are featured in Female Artists, March 31- April 7 2013.

that is SO funny - when i was in highschool (a LONG time ago), we had a male model JUST like that! The female model was an exchange student from Paris who didn't like the family she was staying with, so she moved out and did nude modelling to pay the rent (i swear to god!) but when it came time for the male model, he was 75 if he was a day, all wrinkled like a raisin, but i swear he did the same sorts of poses you're describing, including the headstand!!!

so funny, lol...definitely a day i will never forget!

Looking good for a leprechaun! Thanks for the laugh too...can't wait to see more!

Your story accompanying this great image is hilarious! Nice work Debi, If I didn't live half a world away I'd come to drawing classes with you, it sounds very entertaining

many thanks Linda...you are always welcome, if you get to Texas sometime:)

OMG LOL Debi just read through the description ... fantastic title for this painting ... I want to see drawing of his other moves now :) :) :)

thank you, Atousa...so glad you were entertained

I was expecting to see a bowl of cereal. LOL. Great story for this Debi V14

you are quite welcome, v

Thank you so much for dedicating today's image in Self promotions skills 11 to me Debi. I have been patiently waiting for this one and the drawing and the story haven't disappointed at all. Well worth the wait. Excellent job

so glad you liked it, Terri

This is gorgeous, I love the simple lines that allow the imagination to fill in the rest. v/f

thanks so much, Jeff:)