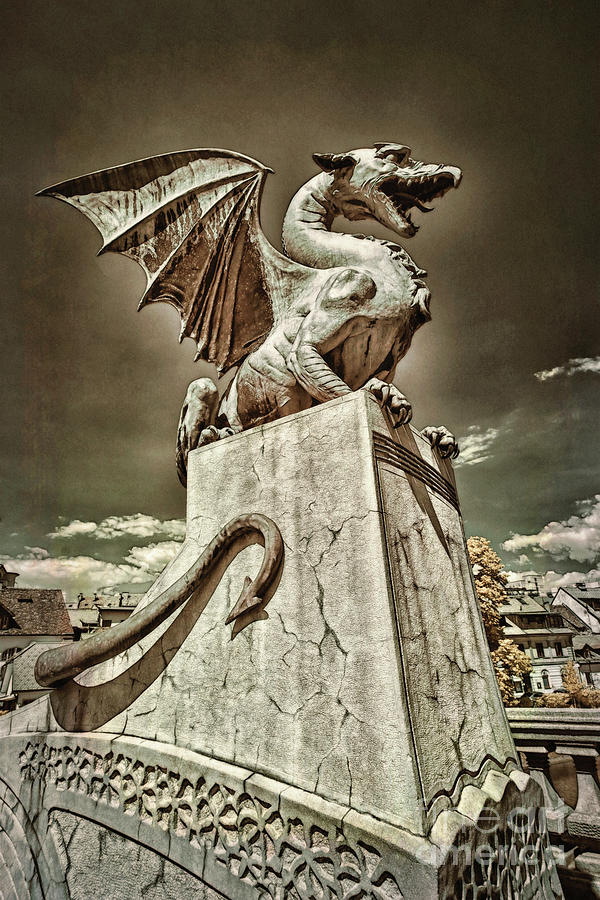 Symbol of the Slovenian capital, and sentinel of the iconic Emperor Franz Josef Jubilee Bridge, Ljubljana’s dragon is comfortably the city’s most recognizable resident. Not only does he perch, with teeth bared and wings spread, on all four corners of the aforementioned arch, but his image also appears on the town’s coat of arms, flag, river walls, manhole covers, and even on the crest of the local soccer team.

Legend has it, that many centuries ago, this fearsome lizard lurked in the marshes that surround the Ljubljanica river, feeding on fish, otters, river rats… and those humans unfortunate enough to stray into its territory, who as simple farming folk, were easy prey for this fire-breathing monster. What no doubt this dragon hadn’t reckoned on, was a bona fide Greek hero, sailing up the river on the mighty Argo galley with a battle-hardened crew of warriors and a barbarian sorceress in tow. Jason was in fact on the run from King Aeetes: he had won the Golden Fleece from the Colchian ruler fair and square, but to add injury to insult he had also stolen the king’s beautiful daughter, Medea, into the bargain (her magic had helped Jason complete the three tasks Aeetes had set the him, and the two were very much in love… at least for now). Naturally Aeetes sent his entire fleet in pursuit of this smooth-talking kidnapper, chasing him across the breadth of the Black Sea; until Jason had been forced to take evasive action, sailing the Argo up the mouth of the Danube river, then into the Sava, and then finally up into the Ljubljanica river, as he tried to make it back to Thessaly, Greece, any way he could.

Having slain the leader of their would-be captors (by underhand treachery, I should probably add), the Argonauts were able to continue their journey relatively unmolested, until, coming towards the spring of the Ljubljanica river, the waters grew too shallow for the hull of such a mighty vessel. Jason decided that his crew had no choice but to dismantle the ship, and carry the boat in pieces, across land to the Adriatic sea (which was nearby), where they could reassemble their vessel and sail for home. But as it was winter already, he also decreed that they would have to spend several months where they were, until the weather was favourable for their journey. So they did just that, building a village on stilts in the marshes surrounding the river. Unwittingly though, they had stumbled into the hunting ground of the dragon.

On a cold winter’s day, shortly after the Argonauts had set up their winter camp, the Greeks heard a terrible shrieking and saw the shadow of a giant flying beast rise from the waters next to their new home. Spitting fire and noxious fumes over their wooden houses, the monster set half the village on fire, with many of the Argonauts plunging into the icy marsh waters to save themselves. Several drowned, and one unlucky soldier was plucked by the scaly talons of the dragon and dragged back to its lair for supper.

As they had already dismantled the Argo, and winter was already upon them, Jason realised he had no option but to kill the beast; so that very same day he fashioned a canoe from a tree trunk and set out across the marshes to find the monster’s lair, bringing with him his lover Medea. Wherever they saw a sign of life, such as birds foraging in the mud, they would change direction to where the land was stillest and no creature could be seen. Eventually, around dusk, this led them to a barren patch of land where nothing stirred and the branches of trees and bushes were blackened and burnt. In this lifeless place they found a dense thicket of sinuous trunks and brambles that formed a large island in the marsh. This was the dragon’s den they realised!
Now Medea had already helped Jason defeat one serpent (the one that guarded the Golden Fleece) by casting a sleep charm over the monster; and so it was that the brave hero sent the young unarmed girl first into the thicket. Finding a hole in the intertwining trunks she entered calmly, softly singing the enchanted words of a spell. Sure enough the dragon was lulled into a drowsy stupor and the sorceress was able to draw close enough to douse his serpentine brow with a potion, using the sprig of a Juniper tree, that put the beast firmly to sleep. Now that the basilisk was out cold, Jason crept into the thicket and drew his sword, determined to dispatch this devil to the shades; however his blade would not cut through the scaly armour of the lizard’s throat, nor could he even gouge its eyes, protected as they were by thick, layered, reptilian eyelids. Seeing her lover toil in vain, Medea counselled that he should bind the monster’s mouth shut with chains she had brought for that purpose, and then stuff its vast nostrils with the bones of its victims, which were lying in piles around the putrid lair that stank of death. Jason heeded her advice and the two of them retreated from the den, just as the beast started to stir. Awakening to suddenly find itself suffocating, the dragon’s fiery breath billowed in its stomach, unable to escape. It burst up from the thicket and into the night sky in blind panic, but its jaw could not snap the binds that the sorceress had overseen and only wisps of black smoke could escape its stuffed nostrils. Jason and Medea watched this terrible struggle crouching in the reeds: the manic beat of its wings, the spasms of its coiled neck, the silent shrieks of agony… until, with an almighty bang, the beast’s belly combusted from within, and its carcass exploded in a spray of fire and coloured sparks, lighting up the black sky for miles around. Yes, this was Slovenia’s first ever fireworks display!

Jason’s battle with the dragon was won, and finally the fertile lands around Ljubljana were ripe for settling. And whilst the Greek hero did indeed march across to the Adriatic sea that spring, as planned, and return to Greece (not to live happily ever after I should add however!), several of his Argonauts stayed behind, mingling with the local folk and forming the first permanent settlement (around 1200 BC) that would later become the Roman fort town of Emona (around 14 AD) and then present day Ljubljana. Or so this version of the legend goes.
As for our dragon, several centuries on and he shows little sign of life… except for when a pure and unsullied virgin passes over his bridge, when he is said to give an almost imperceivable twitch of his tail.

Photograph made with an infrared converted Nikon D3300.

Mary C ... Thank you for the comment and support of the Slovenia Summer Infrared Travel photo, "Ljubljana Dragon".

Diann ... thanks for the comment and support of the Slovenia Summer Travel photog, "Ljubljana Dragon".

John, thanks for the feature of the Slovenian Summer Travel photo, "Ljubljana Dragon", in the Fine Art America group, "Images That Excite You!"

Jeff ... thanks for the feature of the Slovenian Travel photograph, "Ljubljana Dragon", in the Fine Art America group, "Whats New".