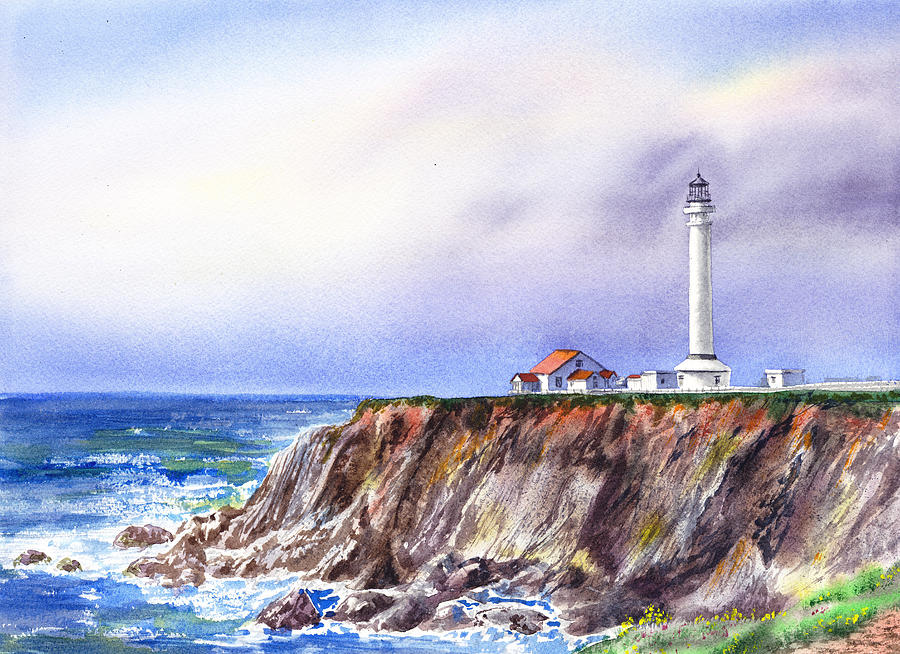 Point Arena Lighthouse - a painting from the series Landscapes of California by the artist Irina Sztukowski.

The Lighthouse is situated on the closest point of land to the Hawaiian Islands in the Continental United States. The point is surrounded on three sides by the Pacific Ocean which keeps the area cool.
The Point Arena Lighthouse is set in one of the most spectacular and peaceful surroundings on the northern California coast. The Point Arena tower is the only Pacific West coast lighthouse of significant height(115 feet) that you can climb to the top! Access to the lantern room provides a panoramic view of the rugged California coast and of the ocean.
A Little bit of history:
The first lighthouse at this site was constructed in 1870. The brick-and-mortar tower included ornate iron balcony supports and a large Keeper residence with enough space to house several families. In April 1906, a devastating earthquake struck the Light Station. The Keeper's residence and Lighthouse were damaged so severely that they had to be demolished.
The new lighthouse began operation in 1908, nearly 18 months after the quake. It stands 115 feet (35 m) tall, and featured a 1st Order Fresnel Lens, over six feet in diameter and weighing more than six tons. The lens was made up of 666 hand-ground glass prisms all focused toward three sets of double bullseyes. It was these bullseyes that gave the Point Arena Lighthouse its unique "light signature" of two flashes every six seconds. This incredible optic, that held an appraised value of over $3.5 million, was set in solid brass framework, and was built in France. Prior to the introduction of electricity, the lens was rotated by a clockwork mechanism. The Keepers, or "wickies" as they were called, had to hand crank a 160-pound weight up the center shaft of the lighthouse every 75 minutes to keep the lens turning. Light was produced by a "Funks" hydraulic oil lamp, that needed to be refueled every four hours, and whose wicks would have to be trimmed regularly. Later, two 1,000 watt electric lamps were installed to replace the oil lamp, and a 1⁄8 horsepower electric motor was installed to replace the clockworks.
Nowadays (since 1984) nonprofit organization called the Point Arena Lighthouse Keepers takes care of this place providing diligent historic preservation of this beautiful place.
(info:courtesy to wiki and pointarenalighthouse.com/)

When you purchase a print, you can e-mail the date of purchase and the image title to Irina, and she will personally send you Certificate of Authenticity with her signature.�

If you are interested in special promotions, discount codes, requesting a commission painting, or wish to license this particular artwork or a series of artworks, please contact Irina directly.

Huge thanks to the art collector from Eugene, OR for purchasing print with this artwork! Irina

Many warm thanks to the Art Collector from Pacifica, CA for purchasing a beautifully framed print with this artwork! Irina

Thank you so much Skip! Irina

Thank you so much dear Melly! Irina

Thank you so much Georgeta! Irina

Such a gorgeous painting, Fiona! Love your work - l/f

Thank you so much Phil! Irina

Gorgeous work of art. Well done once again Irina. FAVORITE and Merry Christmas! And...nice to our Favorite gal on the ocean in your #1 spot during Christmas!

Hi Reynold, Thank you so much; and Happy Happy Holidays! :) Irina

Thank you so much dear Karen! irina

Thank you Patricia, I wanted to achieve the feeling of airy beautiful ocean shore and a monumental strong lighthouse in this painting; the man made beauty competing with the God's made one :). Irina

Thank you Fiona, I guess I picked a right day to paint that lighthouse at Point Arena :). Irina

I personally love when the skies are darker than lighthouse, it does look so monumental, so gorgeous, Jerry! Thank you for such lovely complement. Have a great and productive weekend! Irina

Gorgeous coastal scene, Irina. Something captivating about light houses no matter what time of day or weather. fav / like

Thank you Christiane for stopping by and give such lovely comment! Irina

Irina this is such a very beautiful seascape painting!!! L/F

Thank you so much Nicklas! Irina

Thank you Basant so much! Irina

Thank you Aaron for noticing that. I intentionally gave so much attention to those million years old cliffs. Irina

I love it. the cliffs especially have wonderful character.

Thank you Will! Irina

Thank you so much Gena!!! Irina

Gorgeous painting. Congratulations on your sale.

Thank you so much Katy! Irina

Many thanks to a famous FAA group Artists Best Five works for featuring this painting! Irina Sztukowski

Bruce! thank you for the comment: I really appreciate it! Irina

Love this one! So fresh and lovely! f/v

Thank you so much David and Carol!! Irina

I think this is your best painting so far. I really like it !!