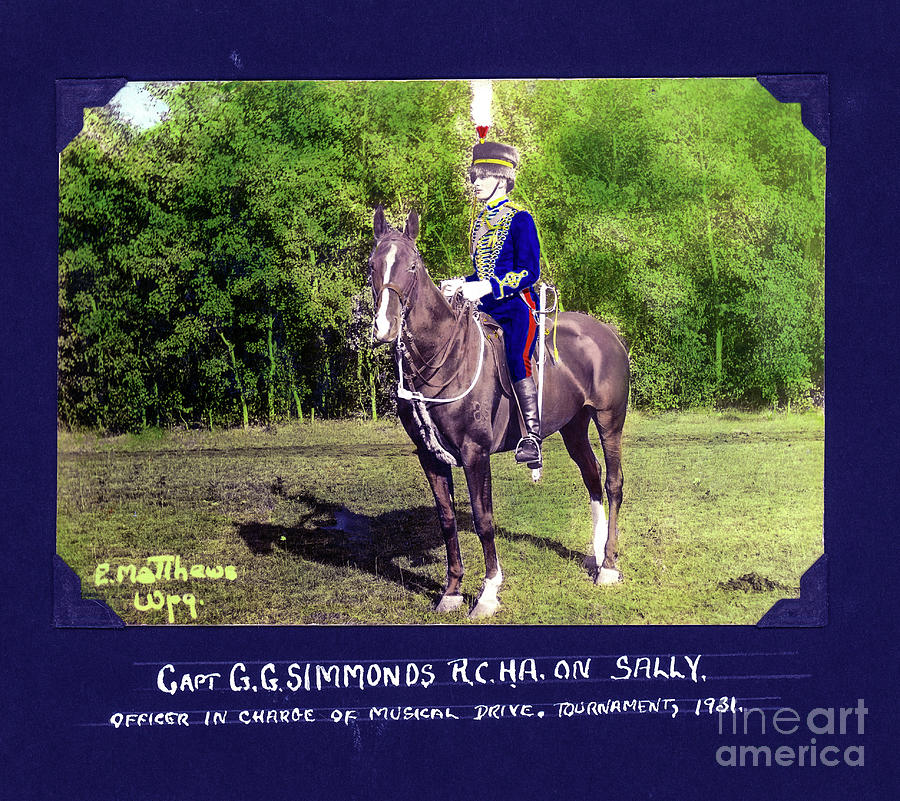 Lieutenant-General Guy Granville Simonds, CC, CB, CBE, DSO, CD (April 23, 1903 â€“ May 15, 1974) was considered by many military historians to be the best Canadian General of World War II. Simmons was born in England into a family with a long history of military service. In 1911 (when Guy was 8), his family emigrated to Canada (British Columbia)

Simmons attended high school in Victoria, British Columbia and later at Ashbury College (a highly regarded Private School in Ottawa). Between 1921 and 1925, Simmons attended Royal Military College in Kingston (Canada's West Point) where he was considered the Best All-Round Cadet in his graduating class (winning the coveted Sword of Honour).

In 1926, Simmons joined the RCHA, first B-Battery (Kingston, Ontario and then C-Battery (Winnipeg, Manitoba) as 2-Lieutenant. This album page and picture of Capt Simmons was part of the estate of my father (Lt-Col Robert A McAlpine) who was a gunner in C-Battery, and part of the famed Musical Drive (which was lead by Simmonds). The Musical Drive was precision musical event performed by four-18-pounder guns (each towed by a team of 6-horses) at a full gallop, swinging their heavy guns skillfully (and dangerously) around public arenas. My father told me that they tried to have the brass fittings on the wheels just "click" as two guns passed. Any error of judgement would have created disastrous results. It was indeed a sight to behold.

Simmonds retired from the Canadian Army in 1951. He is considered by historians to have been one of the most brilliant Generals ever in the Canadian Army. He was not one who suffered fools gladly, and he created enemies in high places and on several occasions, Monty intervened when one of Simmonds' superiors tried to fire him. . .

This is wonderful work

I love these vintage images Robert!

Love this historical and vintage image...

This is really wonderful