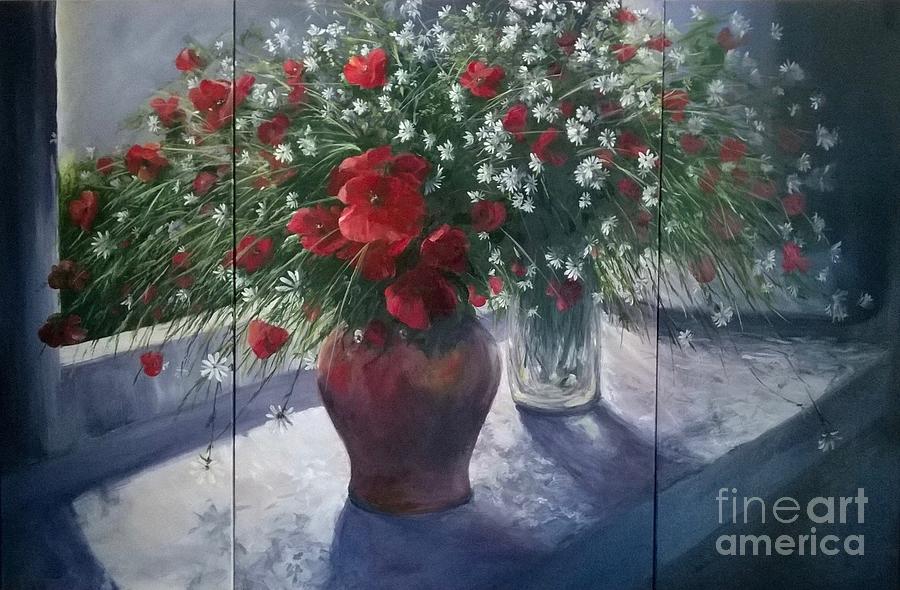 For the last 12 to 18 months, I have been acutely aware of the 100 years since the 1st World War. I have only painted poppies once before, but this year, more than anything for the symbolic meaning, I have been really obsessed...
This triptych is meaningful for me, it is filled with emotion, as I remembered, in every second spent on the work, the thousands, millions of men and women, who have given their lives over the centuries, so that we can live in freedom....

How fortunate are we!?
Despite there being terrible strife, war, pointless bombings, extremists and madmen/women still causing misery and enormous injustices...... relatively speaking, we are more civilised, more 'well off' and in the grand scheme of things, living in relatively peaceful times. Most of us on here (FAA) are simply extremely fortunate to have been born in a country / society where we have rights as women and are protected by laws and constitutions, where we can live an independent life, if we so choose...
I think of all those, through the centuries, who have gone out to fight for freedom and have made the ultimate sacrifice.
And I pray for those who are not as fortunate as I / us, especially the children, wherever they may be in the world.

thank you so much Lyric, much appreciated.

thank you so much Patty.

What a beautiful remembrance! FL

Thank you very much Debby :-)

Thanks so much Madalena. :-) Happy Thanksgiving!

A touching and inspiring memorial, Lizzy. Thank you!

Thank you for your supportive comments Greta