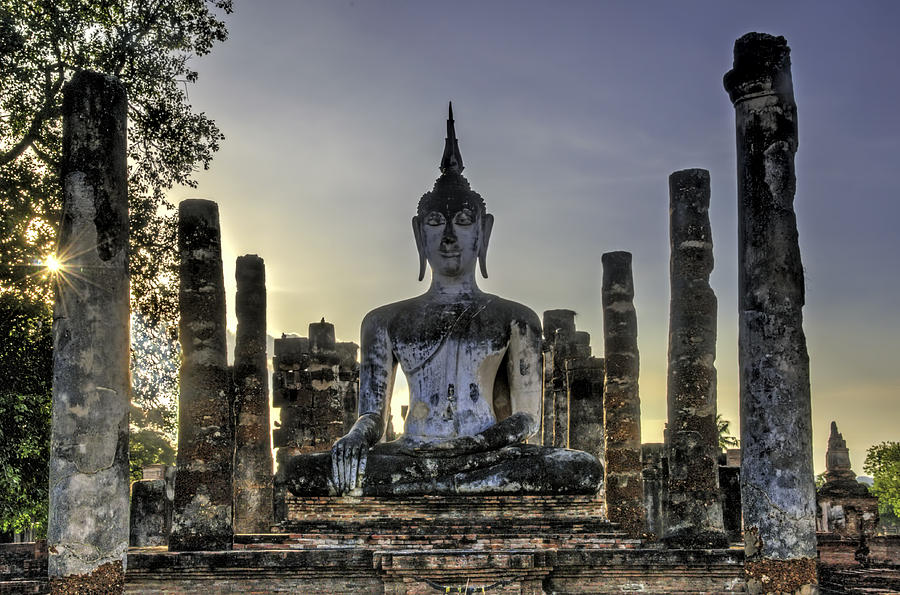 Taken in the Sukhothai historical park. This magnificent large Buddha statue welcomes you into the park. The Sukhothai Historical Park covers the ruins of Sukhothai, capital of the Sukhothai kingdom in the 13th and 14th centuries, in what is now the north of Thailand. It is located near the modern city of Sukhothai, capital of the province with the same name.
The city walls form a rectangle about 2 km east-west by 1.6 km north-south. There are 193 ruins on 70 square kilometers of land.[ There is a gate in the center of each wall. Inside are the remains of the royal palace and twenty-six temples, the largest being Wat Mahathat. The park is maintained by the Fine Arts Department of Thailand with help from UNESCO, which has declared it a World Heritage Site. The park sees thousands of visitors each year, who marvel at the ancient Buddha figures, palace buildings and ruined temples.

Proceeds from the sale of this photograph goes to help orphaned and abandoned children in Colombia South America.

Incredible capture and a rare find indeed. The lighting in this image is magnificent, bringing up the hues and values without distracting from the overall composition. Wonderful! f/l/p/t/g+

This beautiful Buddhist capture of ancient Sukhothai Historcial Park,Thailand,is being featured in the 'Awesome Asia' group..Congratulations..Maria..:)

Congratulations your beautiful work is being featured in The World We See Group :-)

Great capture. I love the sun peeking through. L

excellent photo. that is a mammoth statue! L

Love the sun bursting through!

Really nice capture and must be amazing there l-f

Love the sun burst to the left of the capture. L

Beautiful! I like the way its framed and the sun coming through is perfect!

What a great take on a captivating site; I love the low sun light and the burst by the pillar

wonderful details, from the aging of the stone to the sun peeking through