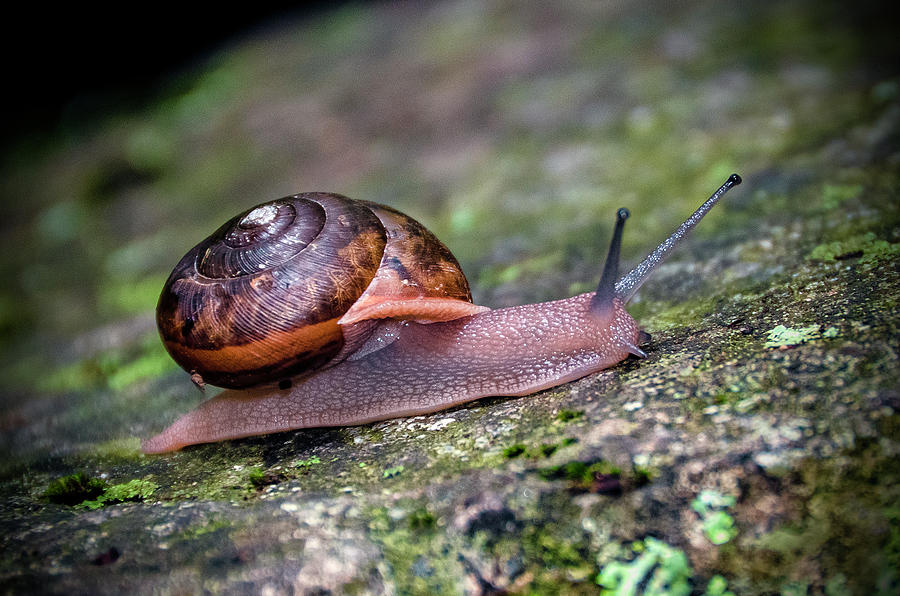 A land snail is any of the numerous species of snail that live on land, as opposed to sea snails and freshwater snails. Land snail is the common name for terrestrial gastropod mollusks that have shells (those without shells are known as slugs). However, it is not always easy to say which species are terrestrial, because some are more or less amphibious between land and freshwater, and others are relatively amphibious between land and saltwater.

The majority of land snails are pulmonates. That is, they have a lung and breathe air. A minority however belong to much more ancient lineages where their anatomy includes a gill and an operculum. Many of these operculate land snails live in habitats or microhabitats that are sometimes (or often) damp or wet, such as for example in moss.

Land snails have a strong muscular foot; they use mucus to enable them to crawl over rough surfaces, and in order to keep their soft bodies from drying out. Like other mollusks, land snails have a mantle, and they have one or two pairs of tentacles on their head. Their internal anatomy includes a radula and a primitive brain. In terms of reproduction, the majority of land snails are hermaphrodite (have a full set of organs of both sexes) and most lay clutches of eggs in the soil. Tiny snails hatch out of the egg with a small shell in place, and the shell grows spirally as the soft parts gradually increase in size. Most land snails have shells that are right-handed in their coiling.

A wide range of different vertebrate and invertebrate animals prey on land snails, and they are used as food by humans in various cultures worldwide, and are even raised on farms as food in some areas.

Thank you Linda for the l/f and your lovely comment!!

Great macro of this little guy!

Robin, thank you for the 'Great' comment and the fav!! :)

Thank youvery much Tery for the wonderful comment and the fav!! :)

Thanks Phil for the great comment and the l/f!!

Thanks Michelle, I appreciate the great comment and the l/f/p!!! :)

Thank you Carol for the wonderful comment and the fav!! :)