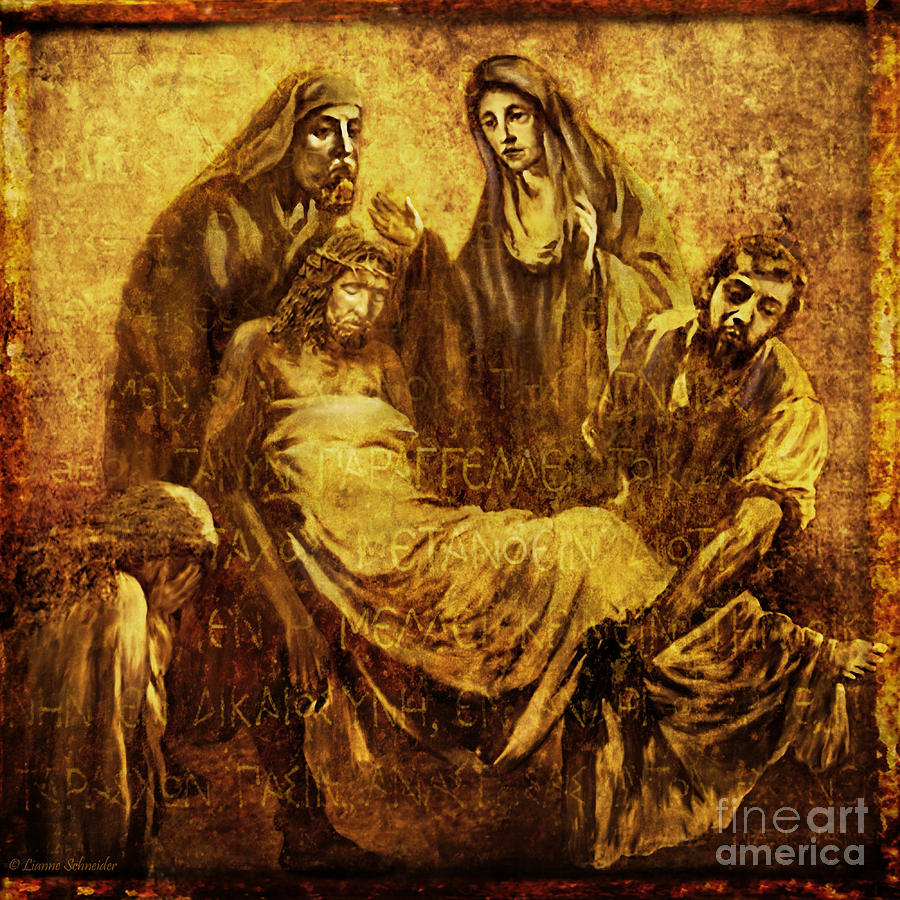 The last of a series of 14 digital paintings.
Photographic art based on a series of images I took myself of statues around the base of the 190 foot Groom Cross in Groom, Texas. This 14th station is the only one for which there was no comparable sculpture so this one is a composite from a fine art work in the public domain, elements of previous sculptures and applied textures.

These images - 14 in all - are in fulfillment of a commission of 40x40 prints of the series that represent the 14 Stations of the Cross or Via Dolorosa (Way of Sorrows) which are vignettes of Jesus Christ's walk to Cavalry and his Crucifixion. Similar images in plaster, bronze, pewter, painted on wood panels or sculpted can be found in Christian churches throughout the world and in many communities, people from all denominations participate in "Living Stations" or "Passion plays" based on these same moments.

Thank you so very much to the following groups and hosts for featuring this remake of an older painting:
VISUAL VOICE - ANNIE
ARTISTIC EXPRESSION - JOETTA
ART FROM THE PAST - JOUKO
EXCELLENT SELF-TAUGHT ARTISTS - JOE
PREMIUM FAA ARTISTS - MARINESCU

All images and my personal poetry/prose are protected by copyright and may not be reproduced, downloaded, distributed, transmitted, copied, reproduced in derivative works, displayed, published or broadcast by any means or in any form without prior written consent from the artist. My copyright does not imply rights to an underlying public domain image and I make no such claim. Copyright on works derived from or based on images in the public domain applies only to the subsequent manipulation or the digital painting resulting from my own style and interpretation. The original image remains in the public domain and such images are used in accordance with international law

Such an incredible Artwork dear Lianne!! your are so amazing!! take care!! lfv

This is so powerful painting,Lianne. You are great artist! Love this painting! L&F

Robert, I am so very honored that you have chosen to feature this painting in FAA FEATURED IMAGES. That means more to me than I can say...thank you so much.

My humblest thanks to Joe and Marinescu for featuring this image in EXCELLENT SELF TAUGHT ARTISTS and PREMIUM FAA ARTISTS. That just means the world to me.

Joetta and Jouko, I'm so very honored that you've chosen to feature this work in your wonderful groups - ARTISTIC EXPRESSIONS and ART FROM THE PAST. It means a great deal to me.

Annie thank you so very much for featuring this image in VISUAL VOICE. I completely redid this one as I was unhappy with the previous version so it means a lot to me that you chose to feature it.

So much emotion and love in this beautiful artwork my friend...loving it the second time around also.....thinking of you! Joyce

This series is extremely inspiring work.. Congrats on your sales, they are so beautiful!! Big FV on this one!!

So beautiful! Congrats on your sale!

Thank you so very much Cheryl.

What a lovely thing to say Anand - thank you so much.

Another spectacular work of art from your series. Always love your work. Beautiful. v/f

Thank you so much Lenore - hope all is well with you and Judy - think of you daily. xo

Beautiful and congrats on your sale! F/V

Thanks so very much Kendall.

Beautiful!! Congrats on your sale. v

Thank you so much Jeff - that means a lot to me.

Deeply emotional and so wonderfully created work, Lianne ! This is so powerful and with a profound spiritual content. f,v

I'm more honored than I can say Ana by your lovely comment. Thank you so very much.

You have done a beautiful job. vf

Thank you so very much Kume - I so appreciate that.

V/F Huge congratulations on this commission, Lianne - what magnificent work! I chose this one to comment upon because it represents, perhaps, the deepest sadness and despair which became, for Christians, the basis for hope. Lovely, lovely work, as always:>) I hope your surgery goes well and your recuperation is rapid and complete!

Thank you so very much Carol - you've always been such a staunch supporter and a great encourager. That just means the world to me. xo

Thanks so much Sandi - I appreciate it a great deal.

A wonderful series, Lianne. Thinking of you and wishing you a speedy recovery my friend. f/v

How lovely of you Heidi - thank you so much. I'm coming along slowly but should be able to get by to visit you and catch up a little at least. xo

Still come back to admire what you did on this incredible piece, awesome!

What an amazing thing to say Xueling - thank you so very much. Coming from an artist with your ability, you can't imagine what that means. xo

Dearest Lianne you continue in my thoughts and prayers for a full recovery......such a beautiful, emotional and heart wrenching piece - No one could have presented this series as you have my friend.......awe inspiring and truly so full of love.........all my best! Joyce

I'm so much better dear Joyce - and finally able to at least answer a few comments and visit a few friends. I can't sit long but I'll be catching up soon. And I cannot thank you enough for your incredibly lovely comments and your beautiful encouragement, my friend xox

Thank you so very much Gloria - it means the world to me that you like this. I can feel your spirit in your comment.

Thank you so very much everyone - you can't imagine how much your many lovely comments have helped in my recovery/rehab. Though I'm still not quite up to visiting each of you, to individual thank yous, I do want you to know how appreciated you are.

An excellent creation that is beautifully done!!! f . v

Great work dear Lianne !!!!! Very powerful and expressive!!!!(F/V)I am a fan of your wonderful series here....Latha..

the beautiful sepia tones give this ancient story even more beauty, prayers for you Lianne, be well soon. I will be thinking about you..

Another beautiful addition to this fabulous series, Lianne! Such a powerful and expressive artwork! f&v

Wow, this series are incredible! I really love your color palette and the feeling you expressed! Great!!

This is such a powerful series.

Excellent work, what a beautiful series of images. Hope everything goes well with your surgery. v/f

Beautiful in every way- thinking of you today my friend!

The passion of this work -- so powerful my friend! Bravo!! V/f/T/G+

Into the darkness of the tomb they brought sadness, weeping, and the One they so loved, little knowing that in three days the tomb would be empty. He would continue to bring light, purpose, and certain hope to their lives... and ours. Thank you again for this series, Lianne. The peace of the Lord be with you.