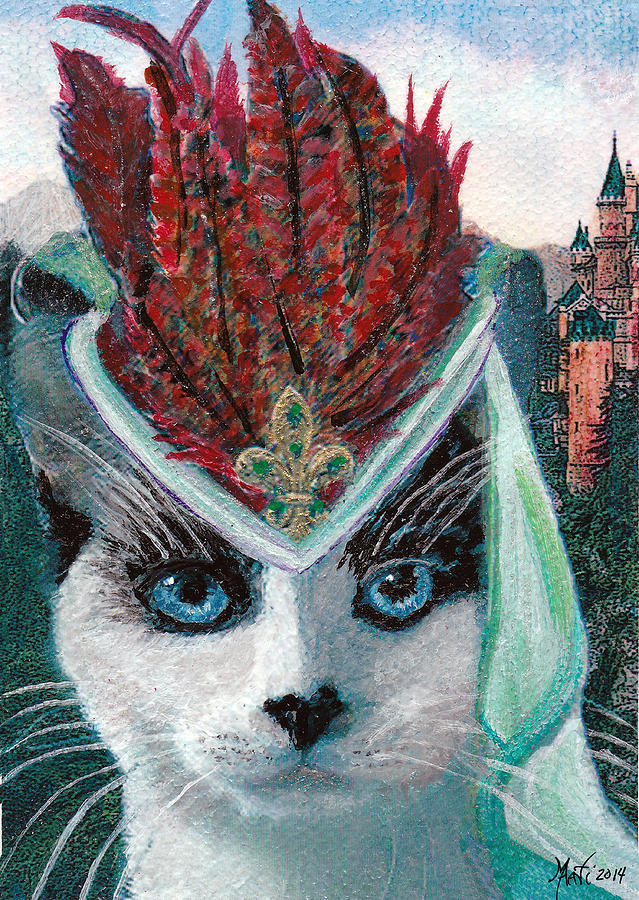 Lady Snowshoe, Michele Avanti from my Cats In Hats series. She is dressed to the nines in her fancy feathered hat, silk veil and gold & emerald fleur de lis brooch. Lady Snowshoe is a princess, you can see her castle in the background.

Hope you enjoy it..these are one of my fun projects!

The Snowshoe is a rare breed of cat originating in the United States of America in the 1960s. Snowshoes were first produced in Philadelphia when a Siamese breeder's cat gave birth to three kittens with white feet. The breeder, Dorothy Hinds-Daugherty, then began a breeding program to produce what were originally called "Silver Laces",[1] crossing the strangely marked Siamese cats with bi-color American Shorthair cats and other breeds. When Hinds-Daugherty left the program, Vikki Olander began working with the cats and recruited new breeders, as well as worked towards full recognition within cat associations. Despite having existed for 45 years, Snowshoes are rare due to the difficulty of reproducing the correct coat markings. The marks are based on recessive genes for color points and on the co-dominant but variably-expressed piebald pattern gene, making it difficult to predict the appearance of offspring.

The coat coloration recognized by registries and associations is point coloration, and it comes in a variety of colors, though some organizations do not recognize certain colors. Snowshoe cats have an affectionate and docile disposition. Due to this, they do not do well under circumstances where they are left alone for long periods of time. Snowshoes are also very vocal, though their voices are not as loud as the Siamese, a cat found in their breed heritage. They are noted as being very intelligent and have the ability to learn tricks and open doors. These cats also enjoy water, and may swim.

A fishing lure is a type of artificial fishing bait which is designed to attract a fish's attention. The lure uses movement, vibration, flash and color to bait fish. Many lures are equipped with one or more hooks that are used to catch fish when they strike the lure. Some lures are placed to attract fish so a spear can be impaled into the fish or so the fish can be captured by hand. Most lures are attached to the end of a fishing line and have various styles of hooks attached to the body and are designed to elicit a strike resulting in a hookset. Many lures are commercially made but some are hand made such as fishing flies. Hand tying fly lures to match the hatch is considered a challenge by many amateur entomologists.
Modern commercial lures usually are often used with a fishing rod and fishing reel but there are some who use a technique where they hold the line in their hands. Handlining is an technique in which the line is held directly in the hands versus being fed through the guides of a fishing rod. Longlining also can employ lures to catch fish. When a lure is used for casting, it is continually cast out and retrieved, the retrieve making the lure swim or produce a popping action. A skilled angler can explore many possible hiding places for fish through lure casting such as under logs and on flats.

Congrats on your clean sweep in the Hats contest, Michele, you won every place! This is fabulous and very imaginative! L/F

I cannot believe it either, Sarah! I am blown away. What an honor. thanks for visiting, best to you as we enter this New Year!

Wonderful and so representative of a cat's personality !

Michele, Beautiful work!!... Your Work has been Featured On The Home Page of Weekly Fun For All Mediums...Congrats!!!

Michele, your cats in hats are simply inspired! I like each and every one of the....brilliant! like/f

Thank you, Anne.. they are such fun to create!

Congratulations your work is featured on the homepage of the Pixels/FAA Group Beauty in Art! 10/8/16 - Please share your Feature in our Feature's Discussion thread!

What a distinguished lady she is. Great image. Enjoyed the story of the Snowshoe - had never heard of them in all of my cat years.

Thank you, Michele.. we are lucky to have two of these wonderful intelligent and water loving felines!

Congratulations on your wonderful work being showcased in Female Artists. Excellent work!

Congratulations on your wonderful work being showcased in Female Artists. Excellent work!

Thank you so much, Ira!

Thank you, RC! Hope all is well in your world!

I love them all but this one stood out because of her "up the nose" appearance and doesn't she know it. A Lady who I think could be quite catty........F/L Sandy

Thank you so much for visiting & commenting, Sandra!

So Beautiful and So Sweet, Michele!! Very Creative, Love this Gallery, makes me smile, Thanks...Love your work!! l/f

I am so glad it makes you smile. I think that warm feeling that we get when love something is a great gift. It delights the viewer, and their energy lifts the world a little bit too. I am grateful for your visit!

I never thought that a cat in a hat could look so natural! I absolutely love this! V/f/p

all these works are fabulous...great cat art!

This cat has attitude! And a stylish hat, and a castle to catch mice in. Makes me think of one of the great fairy tales: Queen Cat, L,F,Pinned

Awesome, Suzanne! She truly does have attitude, but also is a real love.

Thank you, Jim.. you always make me smile!

Beautiful! Congratulations, Michele your gorgeous painting has been Featured on "Fuzzy Warm and Soft!"

Congratulations your creative and unique art work is featured in the "Out Of The Ordinary" group! Beautiful work! lf

Thank you, Debra! My dear little snowshoe is quite intense and it shows in her eyes.

What a beautiful presentation Michele and congrats for being selected on the feature pages!! v/f/t

Good day, my lady.May I say how much I admire your chapeau! It is a lovely hat and suits you perfectly. Back to the castle now...

Oh, Karen, I am quite sure Lady Snowshoe would cuddle up to you!

Well, Michele, you already know that I love the Cats in Hats series. What I love about Lady Snowshoe is that she has such a serious look on her face and inside she is thinking that she is the queen bee of all cats and that she has fooled everyone in the realm. So great. LF

Ann, she truly believes all of this because my husband calls her his Princess - she follows him everywhere and they have a most loving and wonderful relationship, but to her I am just a handmaiden who opens and closes doors, brushes and pets her when she asks. Thanks so much for stopping by.. hugs to you, Ann!

As a cat lover, I really enjoyed your cat series, it makes me smile, very creative work.

Thank you, Feryal Faye! I think that is the greatest gift ever.. to make someone smile!

So dramatic and creative, Michele! Congratulations on your feature in Cute Kitties.

And what a lovely lady she is! I absolutely love her coiffure!

Thank you, Betty, this is fisher cat's sister.. can you believe it? lol.. they are so different in real life too!

What a festive look for the holidays!

OMGoodness, I had not thought about making some Christmas cats till you commented! Thank you so much, Susan!

Thank you, Britta..she is my husband's little princess..lol.. she is a really darling kitty too!

Thank you, let's keep creating it is fun and hopefully uplifts the viewers!