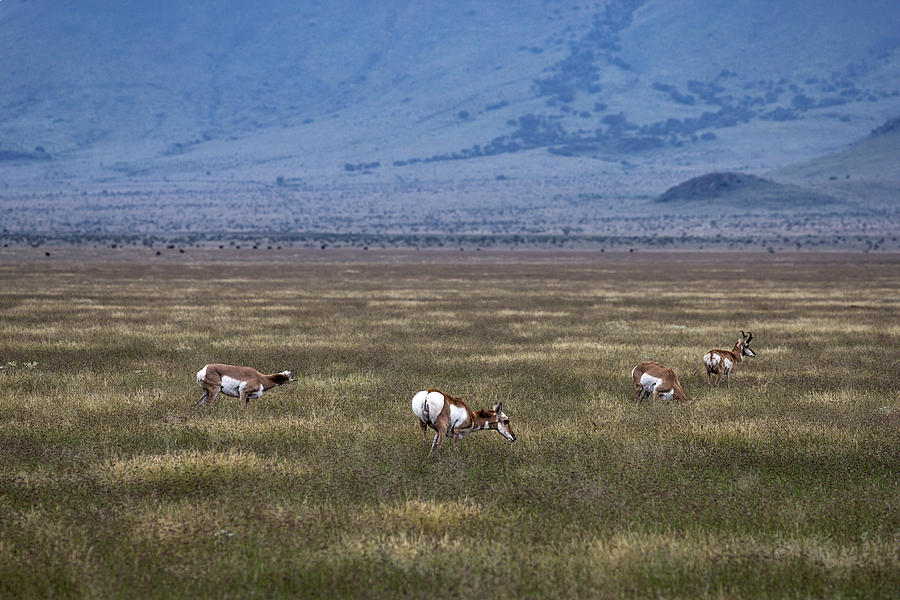 Just hanging out and enjoying the lush vegetation. These pronghorn have not a care in the world as the relax and eat. They are also called antelope. These were near Highway 17 just south of Fort Davis, Texas on September 27, 2014. The Davis mountains of west Texas provide many opportunities to see fauna and flora of all sorts.
The following is from
http://animals.nationalgeographic.com/animals/mammals/antelope/ :

"Fleet-footed pronghorns are among the speediest animals in North America. They can run at more than 53 miles (86 kilometers) an hour, leaving pursuing coyotes and bobcats in the dust. Pronghorns are also great distance runners that can travel for miles at half that speed.

Pronghorns are about three feet (one meter) tall at the shoulders. They are reddish brown, but feature white stomachs and wide, white stripes on their throats. When startled they raise the hair on their rumps to display a white warning patch that can be seen for miles.

Both sexes sport impressive, backward-curving horns. The horns split to form forward-pointing prongs that give the species its name. Some animals have horns that are more than a foot (30 centimeters) long.

Like other even-toed hoofed animals, pronghorns chew cud—their own partially digested food. The meal of choice for this speedy herbivore is generally grass, sagebrush, and other vegetation.

Pronghorns mate each fall in the dry, open lands of western North America. Bucks gather harems of females and protect them jealously—sometimes battling rivals in spectacular and dangerous fights. In the spring, females give birth to one or two young, which can outrun a human after just a few days.

Pronghorns are hunted throughout much of their natural range, but some subspecies are endangered."