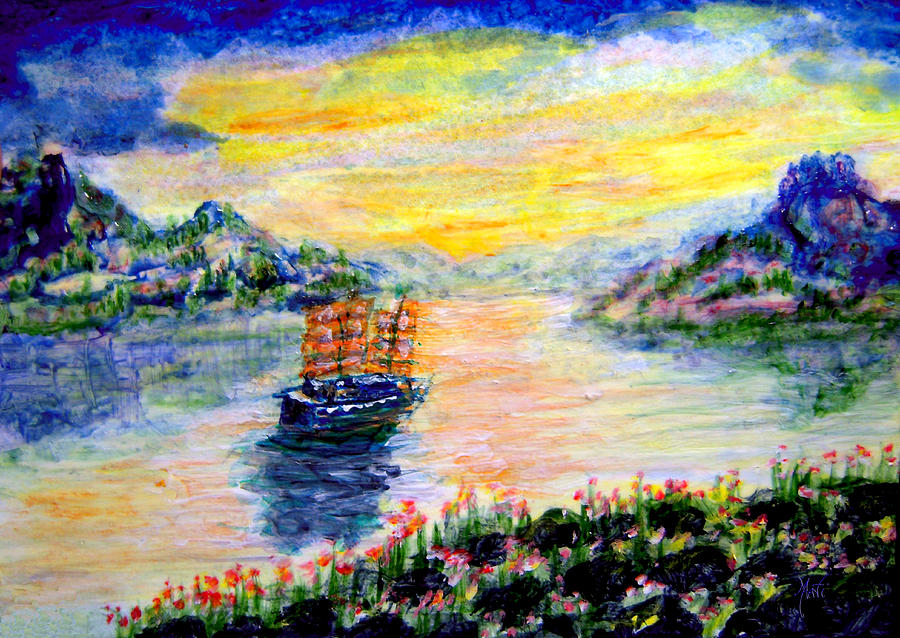 Junk At Sunrise, acrylic on bristol board, artist, Michele Avanti.

As the sun breaks over the water, it casts long shadows and a brilliant glow through the sails of a Chinese Junk, the most common fishing boat in Asia.

A junk is an ancient Chinese sailing vessel/ship design still in use today. Junks were developed during the Song Dynasty (960-1279)[1] and were used as seagoing vessels as early as the 2nd century CE. They evolved in the later dynasties, and were used throughout Asia for extensive ocean voyages. They were found, and in lesser numbers are still found, throughout South-East Asia and India, but primarily in China, perhaps most famously in Hong Kong. Found more broadly today is a growing number of modern recreational junk-rigged sailboats.

The term junk may be used to cover many kinds of boat�ocean-going, cargo-carrying, pleasure boats, live-aboards. They vary greatly in size and there are significant regional variations in the type of rig, however they all employ fully battened sails.

Congratulations! Your work is being featured on the homepage of the “Exclusively Drawings and Paintings” group! You’re invited to archive this image by posting it in our Discussion thread, “Archive Your Art, Featured Or Picked For Our Homepage.”

Thank you so much, Jim!

This is absolutely gorgeous, Michele! I love the colors and texture. Reminds me of Monet's style. :)

Thank you, Lauren, wow, what a lovely comment! I am honored.

So soft and beautiful

Love having you visit, Karen! TY

This is absolutely beautiful!

They are setting off on an adventure! To where..only they know but they are heading east! Safe travels. Beautiful work, my friend

Thank you, Karen, my dear friend!