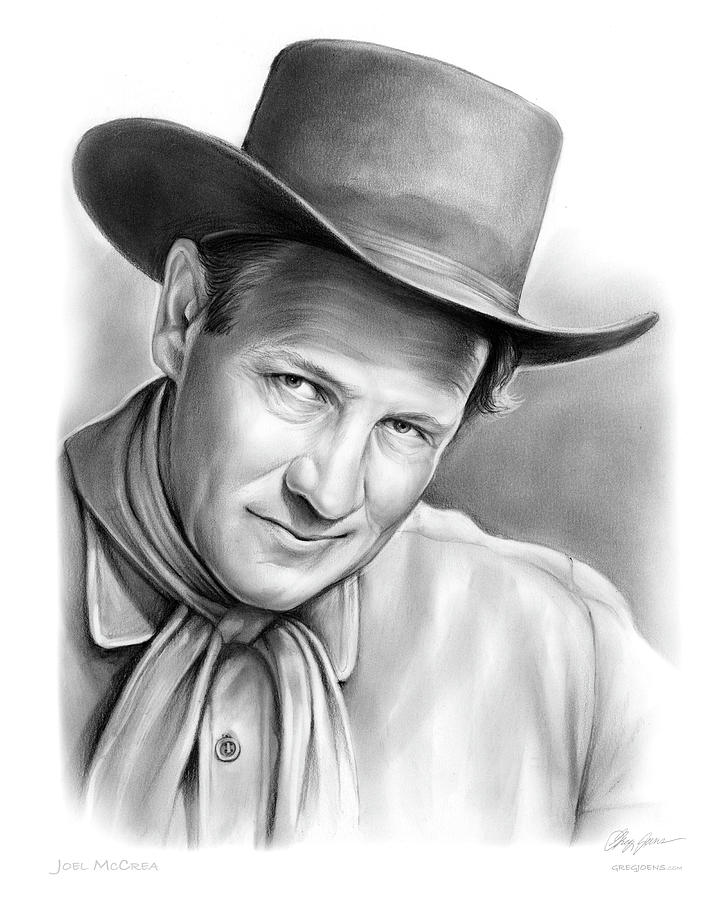 at stars of American Westerns, and a very popular leading man in non-Westerns as well.
He was born and raised in the surroundings of Hollywood and as a boy became interested in the movies that were being made all around.
He studied acting at Pomona College and got some stage experience at the Pasadena Community Playhouse,
where other future stars such as Randolph Scott, Robert Young, and Victor Mature would also get their first experience.

He worked as an extra after graduation from the University of Southern California in 1928 and did some stunt work.
In a rare case of an extra being chosen from the crowd to play a major role, McCrea was given a part in The Jazz Age.
A contract at MGM followed, and then a better contract at RKO. Will Rogers took a liking to the young man
(they shared a love of ranching and roping) and did much to elevate McCrea's career.
His wholesome good looks and quiet manner were soon in demand, primarily in romantic dramas and comedies,
and he became an increasingly popular leading man. He hoped to concentrate on Westerns,
but several years passed before he could convince the studio heads to cast him in one.

When he proved successful in that genre, more and more Westerns came his way.
But he continued to make a mark in other kinds of pictures,
and proved himself particularly adept at the light comedy of Preston Sturges,
for whom he made several films.

By the late Forties, his concentration focused on Westerns,
and he made few non-Westerns thereafter. He was immensely popular in them,
and most of them still hold up well today. He and Randolph Scott,
whose career strongly resembles McCrea's, came out of retirement to make a classic of the genre,
Sam Peckinpah's Ride the High Country (1962).

Scott stayed retired thereafter; McCrea made a couple of appearances in
small films afterwards, but was primarily content to maintain his life as a gentleman rancher.

He was married for fifty-seven years to actress Frances Dee, who survived him.