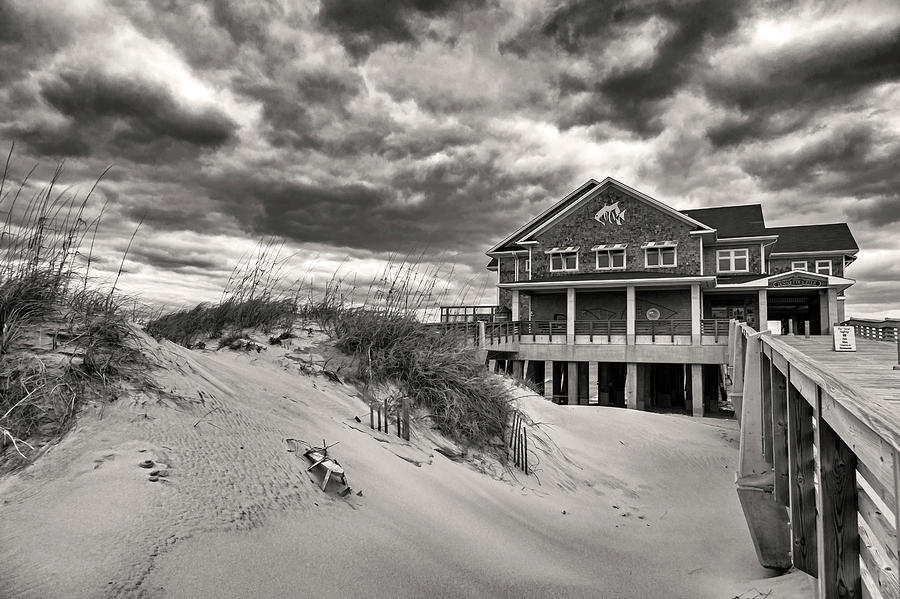 Jennette's Pier on a cloudy spring day. Nags head, North Carolina, USA
The clouds made for a great black and white picture. I added a sepia tone and a touch of painterly effects.

In 2002, the NC Aquarium Society purchased Jennette’s Pier in Nags Head, the oldest pier along the Outer Banks, with plans to refurbish it as an outreach site. Those plans were put on hold in September 2003, when Hurricane Isabel destroyed the structure. Plans were made to completely rebuild Jennette’s as a concrete structure with a 1,000-foot (300 m) pier. $25 million was set aside for construction which began in early 2009. On May 21, 2011, Jennette's Pier was finally reopened to the public. Year-round education programs and week-long summer camps focused on ethical practices in recreational fishing, marine science, and resource conservation are conducted at the pier. Jennette's Pier is self-supporting and receives no state appropriations to operate. The pier is also utilized as a platform for ocean-related scientific research projects.

What a fine piece of artwork and I am happy to announce that this beauty has been featured on the streets of the Art District group. Congratulations for this accomplishment! You may archive your work in the groups "Feature Archives & Thank You Thread"

Beautiful shot and wonderful in b&w! I love that moody sky! l/f!