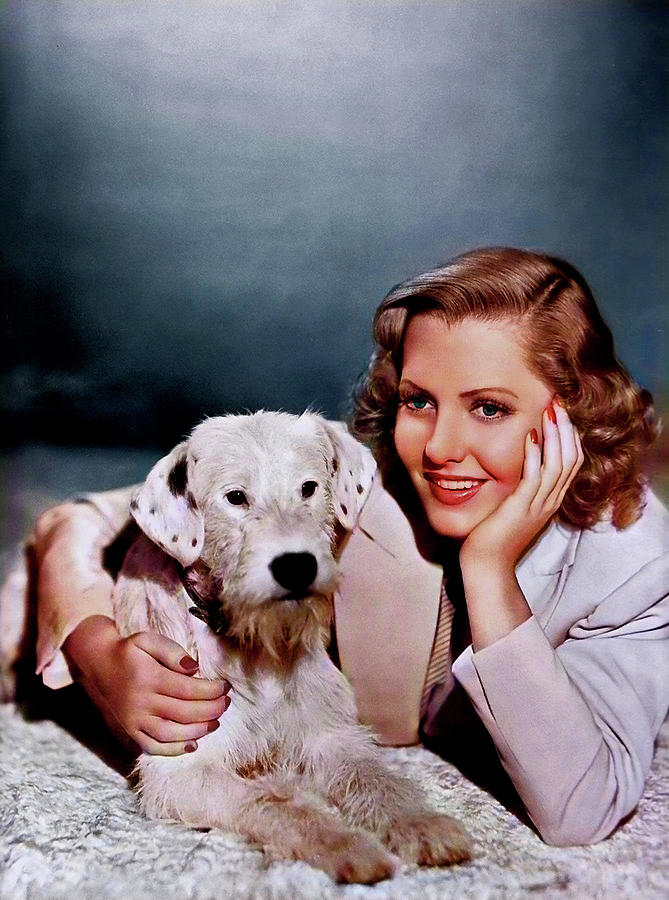 A colorized black and white publicity of photo of actress Jean Arthur (1905-1991). Arthur was an American Broadway and film actress whose career began in silent films in the 1920s and lasted until the early 1950s, by which time she had acted in at least 90 films.

A turning point in her career came in 1935, in John Ford's "The Whole Town's Talking," in which she first demonstrated her light comedy touch and the appeal of her girl-next-door personality. She went on to play a succession of fetching, vivacious, often oddball, unpretentious heroines.

She reached the peak of her popularity in Frank Capra's social comedies of the late 30s, with feature roles in three Capra films: "Mr. Deeds Goes to Town" (1936), "You Can't Take It with You" (1938), and "Mr. Smith Goes to Washington" (1939). The films championed Arthur playing an "everyday heroine".

Arthur was nominated for an Oscar as Best Actress in "The More the Merrier" (1943). Director George Stevens said she was "one of the greatest comediennes the screen has ever seen."

Film historian James Harvey wrote in his history of the romantic comedy: "No one was more closely identified with the screwball comedy than Jean Arthur. So much was she part of it, so much was her star personality defined by it, that the screwball style itself seems almost unimaginable without her." She was often considered "the quintessential comedic leading lady". Her last film performance was a non-comedy western, playing the homesteader's wife in George Stevens's Shane in 1953, alongside Alan Ladd.

Despite her fame, Arthur was known to be reclusive and she refused to become a part of any kind of publicity. "Life" magazine in 1940 wrote, "Next to Garbo, Jean Arthur is Hollywood's reigning mystery woman."
(credit: Wikipedia)