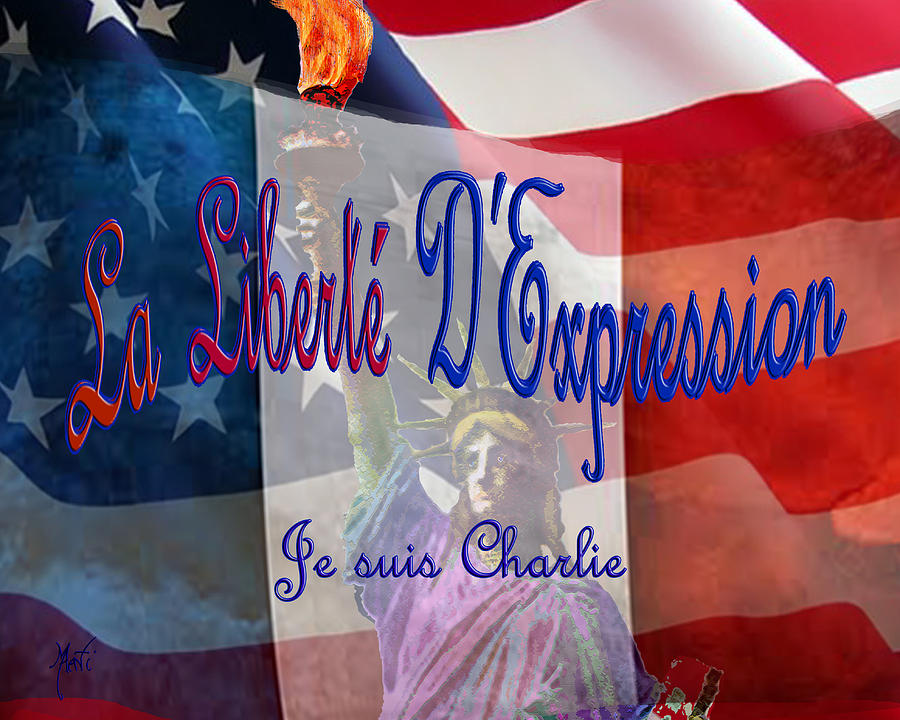 La Liberte D'expression, means Freedom of Speech, one of the most fought for freedoms across the centuries. On January 7, 2015, in Paris, France, the offices of the weekly satirical newspaper, Charlie Hebdo were invaded and twelve people were murdered by Islamic Extremists shouting, Allah is great. It is a time where the people of the world must reflect, find common ground and re-access what is important. In Paris, home to one of the greatest satirists in history, Voltaire, a chord has been struck and the world gathers around in solidarity to make all extremists recognize murder cannot silence our voices.

On 7 January 2015, at about 11:30 CET (10:30 UTC), two masked gunmen armed with AK-47 assault rifles, a shotgun, and an RPG launcher forced their way into the offices of the French satirical weekly newspaper Charlie Hebdo in Paris, France. The newspaper has attracted worldwide attention for its regular depictions of Muhammad, the founder of Islam. The gunmen fired up to 50 shots with automatic weapons, shouting "Allahu Akbar", Arabic for "God is great". They killed twelve people, including the editor St�phane "Charb" Charbonnier, seven other Charlie Hebdo employees, and two National Police officers, and wounded eleven others before escaping by car.[14][15][16]
Police detained several people during the manhunt for the two main suspects. A third suspect gave himself up. The assailants were described by police as "armed and dangerous", and the threat level in �le-de-France and Picardy was raised to its highest possible status. On 9 January, police tracked the assailants to an industrial estate in Dammartin-en-Go�le where they took a hostage.

The connection between the Charlie Hebdo shooting and another shooting in Montrouge by a fourth suspect was established.[clarification needed] This gunman also took hostages at a kosher supermarket near Porte de Vincennes.[18] Police conducted simultaneous raids in Dammartin and at Porte de Vincennes; three terrorists were killed, and some hostages were injured or killed. French President Fran�ois Hollande confirmed that four hostages were killed in the Vincennes supermarket, and the prosecutor confirmed that they were killed before the police intervention. A fifth suspect is still on the run.[22]
A total of 20 people were killed at four locations between 7 and 9 January, including the three suspects;[23] at least twenty-one others were injured, some critically. The attacks are the deadliest act of terrorism in France since the 1961 Vitry-Le-Fran�ois train bombing by the Organisation de l'arm�e secr�te (OAS).[24]
The remaining staff of Charlie Hebdo announced that publication would continue, with plans for a print run of one million copies for the next week's issue, rather than its typical 60,000.

Thank you for posting this to WHAT? l, f, WHAT?

I am honored to have a small say in this terribly difficult situation. To think that creatives have been murdered for their art is horrific and it unfortunately shows the degree of insanity that parts of humanity have reached. We must stand together in solidarity and make our voices heard. TY for the opportunity, Jim!