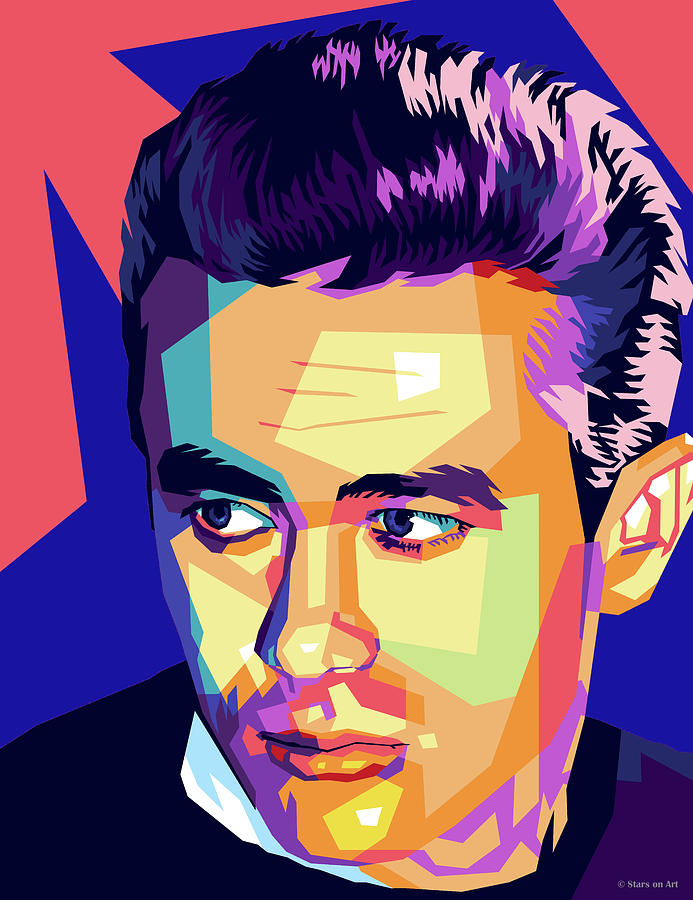 Pop art portrait of James Dean (1931-1955). In just more than a year, and in only three films, Dean became a widely admired screen personality, a personification of the restless American youth of the mid-50s, an embodiment of the title of one of his films, “Rebel Without a Cause” (1955). He was nominated for Academy Awards as best actor for “East of Eden” (1955) and “Giant” (1956).

Dean was killed in a highway crash while driving his Porsche to Salinas, to compete in a racing event. His adulation by fans grew posthumously to legendary proportions. Many of them refused to accept his death, and a James Dean cult developed into a mass mystique of a kind that surrounded the personality of no other star since Valentino.

He moved with his family to Los Angeles at age five and returned to the Midwest after his mother died. From age nine he was raised on an Iowa farm of relatives. After graduating from high school, he returned to California, where he attended Santa Monica Junior College and UCLA. He appeared in some TV commercials, and had small parts in several films.

In 1951 he went to New York to study acting and to support himself worked as a busboy. He sat in some classes at the Actors Studio, received some bit parts on TV, and returned to Broadway in 'The Immoralist' (1954), which led to a screen test with Warner Brothers. Director Elia Kazan is credited with first discovering him and bringing him to Hollywood to act in “East of Eden.”

A number of biographies of James Dean have been published, including “Come Back to the Five and Dime, Jimmy Dean, Jimmy Dean” (1982) which became a film, and James Bridges's “September” (1978).