Is This My Good Side 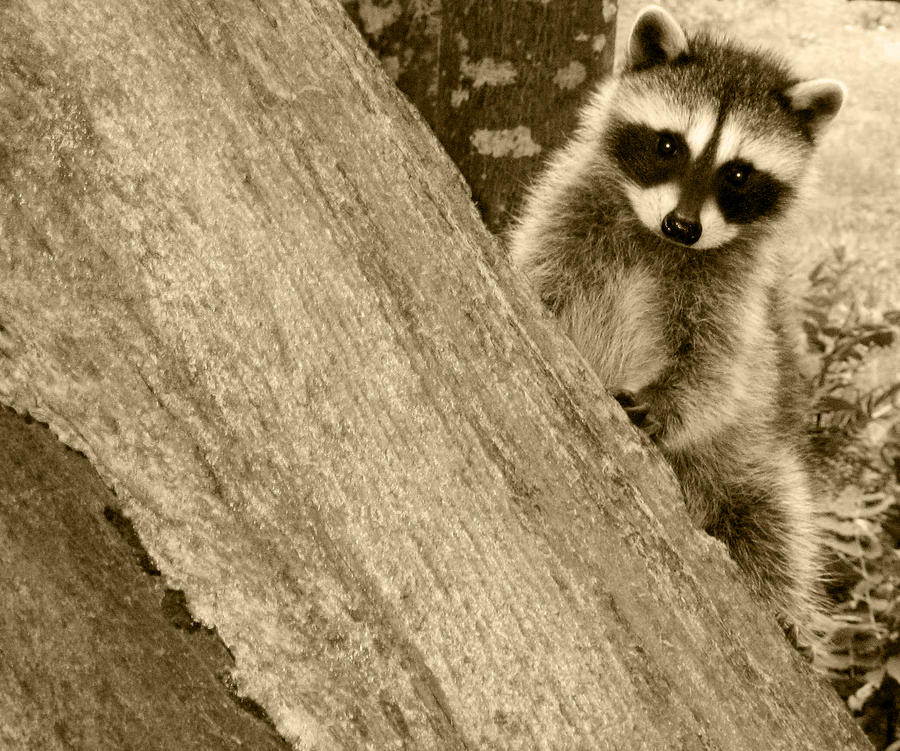 Is This My Good Side

I think the Mother tells her kids, " Go over there and sit on that stump, and try to look really cute!" They just look like they are posing for a picture! This little guy is so fuzzy and cute, you can believe he is real!
Here is some of that annoying information you may or may not want to know about the Raccoon..
The size of a raccoon's home range as well as its nightly hunting area varies greatly depending on the habitat and food supply. Home range diameters of 1 mile are known to occur in urban areas. Mortality and Longevity.Raccoons die from encounters with vehicles, hunters, and trappers, and from disease, starvation, and predation. Young raccoons are the main victims of starvation, since they have very little fat reserves to draw from during food shortages in late winter and early spring. Raccoon predators include cougars, bobcats, coyotes, and domestic dogs. Large owls and eagles will prey on young raccoons. The average life span of a raccoon in the wild is 2 to 3 years; captive raccoons have lived. Viewing Raccoons Raccoons can be seen throughout the year, except during extremely cold periods. Usually observed at night, they are occasionally seen during the day eating or napping in a tree or searching elsewhere for food. Coastal raccoons take advantage of low tides and are seen foraging on shellfish and other food by day. Trails Raccoons use trails made by other wildlife or humans next to creeks, ravines, ponds, and other water sources. Raccoons often use culverts as a safe way to cross under roads. With a marsh on one side of the road and woods on the other, a culvert becomes their chief route back and forth. Look for raccoon tracks in sand, mud, or soft soil at either end of the culvert. In developed areas, raccoon travel along fences, next to buildings, and near food sources.

Oh of course it is, Kym is photographing you and you are going to be famous in her new book;0 f/v

Kym this is wonderful!..love it.V/F..saw it in our favorites in M&N group and congratulations on your feature..

Sherry, Thanks for this kind message you left.. a long, long time ago! Ouch, I missed it!

What a great sepia image and shot! Wonderful composition! F/V/T/G+/ My DFM&N!

Sandra, Thanks for the feature, and a bunch of votes, and promotes, and best of all your NOTES! Thanks... I thik you love sepia like me? hehe

SANDRA, Happy Saturday to you! Thank you for the feature of my little feller coonie photo named IS THIS MY GOOD SIDE in your wonderful group MEMORIES AND NOSTALIGA 1 A DAY... I appreciate the group and seeing people's memories and pictures!

Mihyoun, I appreciate all the time you took yesterday to vote and look thru my gallery!

Alessandro, I think you like SEPIA as much as I do? Thanks for your compliments today, or yesterday!

s it your captions or the photo itself... who knows. They just make me laugh outloud. I love the sepia tx. It's like Chanukah. v/f

Chana, I'm glad I could make you laugh, or the photo could! These little fellers make me laugh all the time! They are like cartoons characters! You can't make this stuff up! I appreciate you coming by and voting and favoritING..

KRISTA, Thanks so much for the new features this week! For the feature of this little feller's photo named IS THIS MY GOOD SIDE? In your group YOUR FAVORITE ART WORK.. This is a fun group, we get to see what people's favorite artwork is! I love this little feller... Have a great start to a new week KRISTA!

Eddie, Thanks so much for taking the time to stop by and being a great voter and promoter.. I appreciate it!

Jjr First Star Art, (What you run a group "without color" haha. Thank you for the feature of my little feller coonie photo called IS THIS MY GOOD SIDE in your group BEIGE BROWN SEPIA... It is most appreciated! Happy New Year too Jjr!

Cory, Thanks again for featuring another photo of mine...IS THIS MY GOOD SIDE? in your group JOY... Much appreciated!

David, Thanks, these little bandits are soooo cute when they are little! But I guess everything is cute when it is little? Thanks for your votes and favor!

A wonderful capture! So very cute!

Andrea, Thank you so much for your comments...nice of you to say so!

Rosy, Thanks for your compliments, and votes and favorite-ing!

Bob, Thanks for the comments about the little guy, but he is only about 4 weeks old, I hope he would be behaved at this young age!! But maybe they can be rebel rousers this young ?? Thanks for your votes and favours!

Odd, you have to say awwwww right??? Thanks for giving th coon the smily face!

Sandi, thnaks so much for lookinf at the little feller! I'll tell him you voted and favorited him!! haha