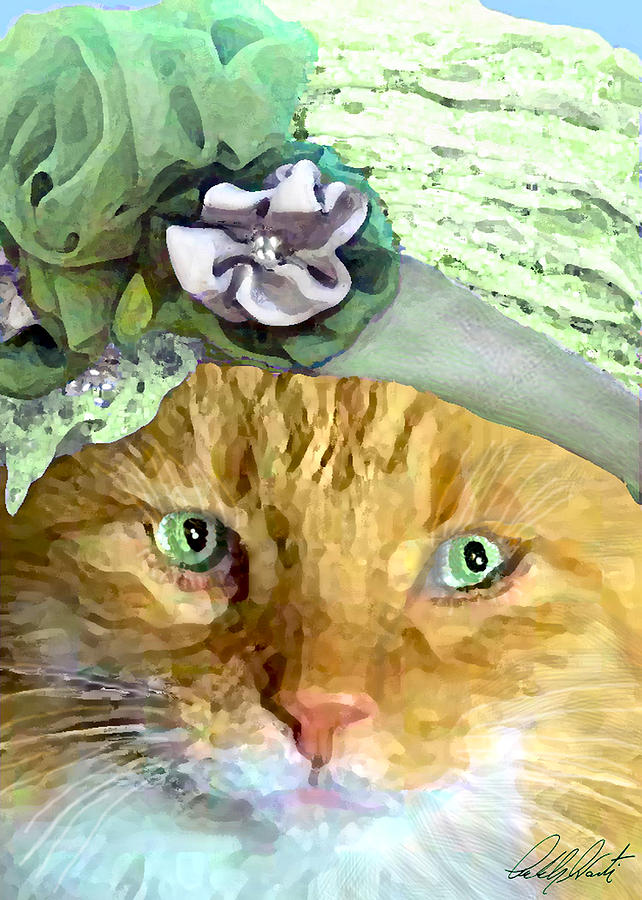 From my Cats In Hats series, here is Irish Cat, she is an older orange tabby on her way to an Irish wedding, dressed fashionably for the occasion. This painting is based on a photo of our dear old kitty Sousa who has crossed the bridge at a very old age. I did not have a good resolution photo available but I think I managed to paint him close to his real self. Oh, yes, he was a he..and I have made him a she..but alas, knowing how loving he was, he would have let you put a dress on him just so he could purr in your arms.

Common Mackerel tabby, with the striped pattern
A tabby, also known as grey tiger, is any domestic cat that has a coat featuring distinctive stripes, dots, lines or swirling patterns, usually together with a mark resembling an M on its forehead. Tabbies are sometimes erroneously assumed to be a cat breed.[1] In fact, the tabby pattern is found in many breeds, as well as among the general mixed-breed population. The tabby pattern is a naturally occurring feature that may be related to the coloration of the domestic cat's direct ancestor, the African Wildcat, which (along with the European Wildcat and Asiatic Wildcat) has a similar coloration.

The English term "tabby" comes from a translation of the French for "striped silk taffeta", which derives from the French "tabis", meaning "a rich watered silk (originally striped)", in turn from Middle French "atabis" (14th century), from the Arabic term "attabiya", from "Attabiy", a neighborhood of Baghdad where such cloth was first made, named for Prince 'Attab of the Umayyad Caliphate, as compared to the Spanish term "ataviar", meaning "to decorate or to dress or wear" (often implying very elegant and/or expensive clothing).[2] The term tabby cat, "one with a striped coat", is attested from the 1690s; the shortened form tabby was first attested in 1774. The idea of "female cat" (1826) may be influenced by the feminine proper name Tabby, a pet form of Tabitha, which was used in the late 18th century as slang for a "difficult old woman"

Love this series and these colors!! LF

That's great. Your cats in hats made me smile.

Awesome, Teresa, that is why I paint them!

Congratulations your wonderful work is now featured on Artist Salon 1! Please add your work to our Discussion archive for features.

Reminds me of an old friend. Lovely.

Oh, the beautiful golden tabbies are such loves. TY for visiting!

Adorable! Congrats on your second place finish in the A Little Irish contest!

Revisiting this treasure to congratulate you on your 2nd place finish with this painting Michele. Great job.

Thank you so much, Maria!

Full of artistry and appeal. Love it! L/F

This is adorable, Michele! My wife and I both love kitty cats, and she's half Irish, so this caught my eye right away! (smiles)

Thank you, Felipe, I am so glad it made you smile!

Congratulations ! Your Outstanding Art Work was FEATURED in the Group and rated The Best of the Best

PJ, Your Work has been Featured On The Home Page of Weekly Fun For All Mediums..Happy Days..Congrats!!!

Thank you so much, Chrisann!

OH HAPPY Day!!! This photo makes me feel happy! So happy that it's been featured on the Oh Happy Day group homepage. Thank you for growing my smile today! F/L/T

Congratulations on your outstanding artwork! It has been chosen to be FEATURED in the group “500 VIEWS.

Congratulations on your Feature in Cats and Kittens.

Good morning my fine Irish lady! You are looking very elegant today. Enjoy yourself at the wedding, don't eat too much cake!

I was just thinking about you, Karen, so glad to hear your cyber voice. Hope all is well in your world. TY so much for stopping by!

I am just loving this series!

So glad you are visiting and having fun!

What a great series! Very imaginative and well done! f

Love the cats in hats :) LF

What a marvelous series and of course the Irish cat is my favorite!

Such wonderful artwork, Michele! Congratulations on your feature in Cute Kitties.

In love with your series Cats in Hats!

Thank you, Linda.. it is truly a fun series!

I love your Cats in Hats series! Very whimsical and creative! f/l

Congratulations on being featured! Too sweet. Thanks for adding me to your 'watchlist'. F/L

Hi Jennie, thank you for visiting! Love checking out your art! Wishing you every success!

Such a beautiful job on this lovely kitty, Sousa! l.f.

I love your Cat in Hats series Michele it is wonderful!!!

I can't believe the wonderfulness of these cats!!

Thank you, Cecily! I guess my love for them shows through.. they are all so wonderful!

Thank you!! So glad they made you smile!