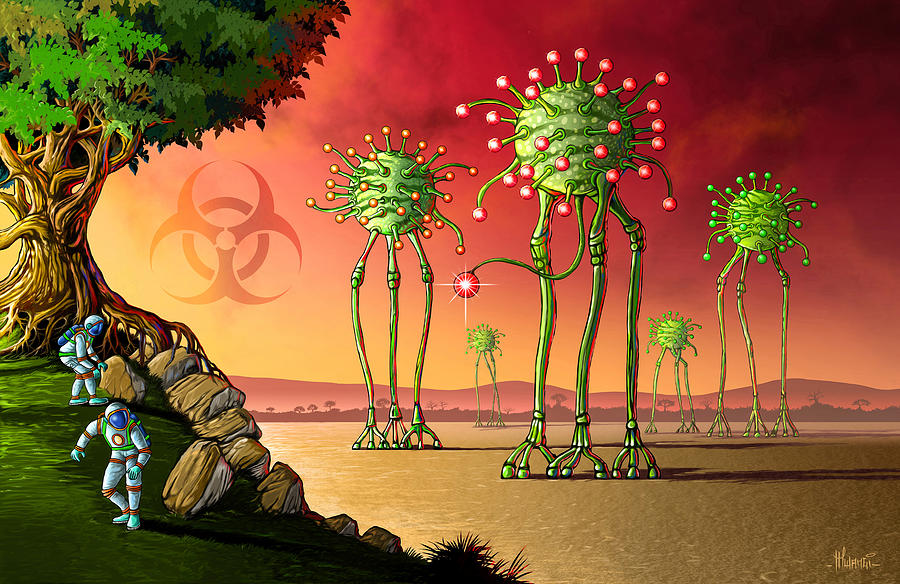 The War of the Worlds is a science fiction novel by English author H. G. Wells, first serialised in 1897 by Pearson's Magazine in the UK and by Cosmopolitan magazine in the US. The novel's first appearance in hardcover was in 1898 from publisher William Heinemann of London. Written between 1895 and 1897.

In the story of War of the Worlds, Martians attack London and progressively all humanity. They are here to eliminate the human race. They have superior technology. They ride inside some very tall semi organic tripods. They sure are almost destroying the human race… but then, help comes from a very unlikely place.

In many versions of this great science fiction writing and movies, the Aliens were killed by flu or some pathogens that human race had lived with. We were saved by microbes that exists on earth. Thus, in the story, the great enemy was defeated by things unseen. The world armies couldn’t make it.

In my painting which is somewhat abstract in nature, I try to make covid19 the antagonist from another planet. They also have a ship that resembles the Bio-hazard Sign hanging in the sky as they go on their evil mission. I also go the extra mile to equip the humans with space suits that make sure they don’t breath the poisoned air. Interestingly, the Aliens close to the two human beings start to get ready for an attack by turning their sensors from green to Orange and then to War Mode RED. I leave it at that for the audience to decide what happens.

I was not sure about this painting, but I feel that we need to see the world we are living in now and the realities of our lives as a truth. At the moment I can't even watch a biological warfare movie for fun. It is not entertainment anymore. The truth, in effect, is worse that fiction. In truth, what we see in movies is much less shocking than the reality experienced in the modern world in many places on planet earth. In the end, God safe us all!

Congratulations, your creative and unique art work is Featured on the homepage of the "Out Of The Ordinary 1 A Day" group! 5/23/21 l/f/pin

Thank Lyric for the feature

I understood your masterpiece even without reading your description, Anthony. Love the thinking behind it. Love your comentary. Love your painting. Perfect for our current state of affairs. f/l

Thanks Anna for understanding. I appreciate your timely comment

Anthony, this is one of your best works, well designed and executed.

Thank you very much Hans.

What a masterwork! Wow! Love this my friend.

Thank you Alexander. I appreciate

A marvelous work, Anthony....and an interesting and inspirational description !

Thanks Murray for the feature.