I Put My Arm Around Her 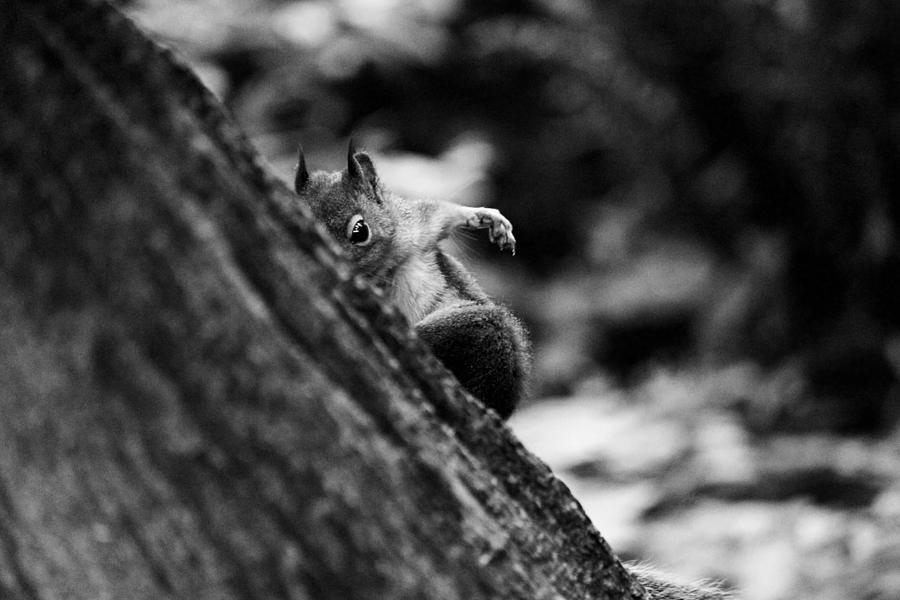 I Put My Arm Around Her

This other Douglas Squirrel appears to be telling his other buddies how he makes the moves with the ladies. "I go in slow, then I raise my arm and put it around her shoulders like this!" Hehe. I just know this is what he is telling his other Douglas Squirrels to do. These little brown squirrels, known as Douglas Squirrels have to fight it out for the territory. They really try to guard their territory against the invasive Grey Squirrel that has taken over our area. They sure are interesting little fellows. Here is some information on these cute little critters.Squirrels are among the most familiar wild mammals that we encounter, both in our backyards and out in the wilderness. Unlike many mammals, squirrels are diurnal and their energetic antics make them highly conspicuous.
The Pacific Northwest is home to numerous ground squirrels and tree squirrels, including a couple non-native species.
The Douglas Squirrel (Tamiasciurus douglasii) also called a Chickaree is the species you are most likely to see in the forests of western Washington and Oregon. These bold little animals are very vocal and will often bark, growl, or whistle at those they perceive as intruders, including well-intentioned hikers and naturalists. Douglas Squirrels are 11-14 in length (28-36 cm). They have brown fur on their backs and orange or orange-white fur on their bellies. A black line may run along the squirrel sides, dividing the dorsal and ventral fur. The ears are tipped with black tufts and their is a ring of light-colored fur around the eye. Douglas Squirrels live in coniferous forests from British Columbia south to the Sierra Nevada mountain range in California. You can see a range map here. Old tree cavities excavated by woodpeckers are used as nests by Douglas Squirrels in the winter (they do not hibernate). The squirrels make dreys out of abandoned crow nests and use these in the warmer months. The primary food source for this squirrel is nuts from conifer cones, including those from fir, pine, spruce, and hemlock. Piles of Douglas Fir cone scales at the base of a tree are evidence of Douglas Squirrel feeding. Green cones are clipped from trees by Douglas Squirrels in the autumn. The squirrels then stash the cones in caches called middens. Hollow spaces under logs or rocks are common places for middens. A midden serves as a sort of pantry in winter, when food is otherwise scarce for squirrels. Hundreds of cones might be piled in a midden and these may accessed for several years. Douglas Squirrels also east mushrooms, berries, and seeds. Predators Owls, Northern Goshawks, American Martens, Bobcats, foxes, Coyotes, and domestic cats all eat Douglas Squirrels.The Douglas squirrel is also known as the pine squirrel and the chickaree. It is reddish-brown on top and white or orangish-white on its undersides. In the winter its fur may be a little grayer. It has small ear tufts in the winter. It has very good eyesight and hearing.
The Douglas squirrel can be found from south west British Columbia south to northern California.The Douglas squirrel lives in coniferous forests. The Douglas squirrel eats pine seeds. In the fall, it cuts green pine cones from tree limbs and buries them in special piles called middens. The Douglas squirrel also eat acorns, berries, mushrooms and fruits.

I think what they really like are Sunflower seeds, and some of that seven dollar a loaf bread crumbs.. hehe

Hi, Kym! I can always count on finding something to smile and laugh about here! Your creative and funny titles and descriptions are just wonderful - I love your outlook and perspective on life and your love for the little beings you photograph so expertly. Thank you for all the joy! L.F.

This is just too cute! Great capture. l/f

You have such a great sense of humor, Kym, and what a super imagination! This is a magnificent shot! Love it! Fav'd!

Love the photo and the title:-)

I'm with Karen - your images always brighten my day --- or in this case late into the night! Adorable, and your comments just make it even more fun! v/f

Ha ha ha ha! I came to visit for my daily laugh and you never disappoint! So cute and a really nice composition too!....fv

You certainly have a lot of critters in your vicinity.

RAMON MARTINEZ, Thank you for being the first one to feature my furry little friend photo named I PUT MY ARM AROUND HER in your wonderful group BLACK AND WHITE. I appreciate your time and dedication Ramon. Your new portrait reminds me of the actor Lou Diamond Phillips... Has anyone else told you this? Thanks again!

You are amazing with these shots! Fv

Thank you Eddie! I appreciate your kind words!