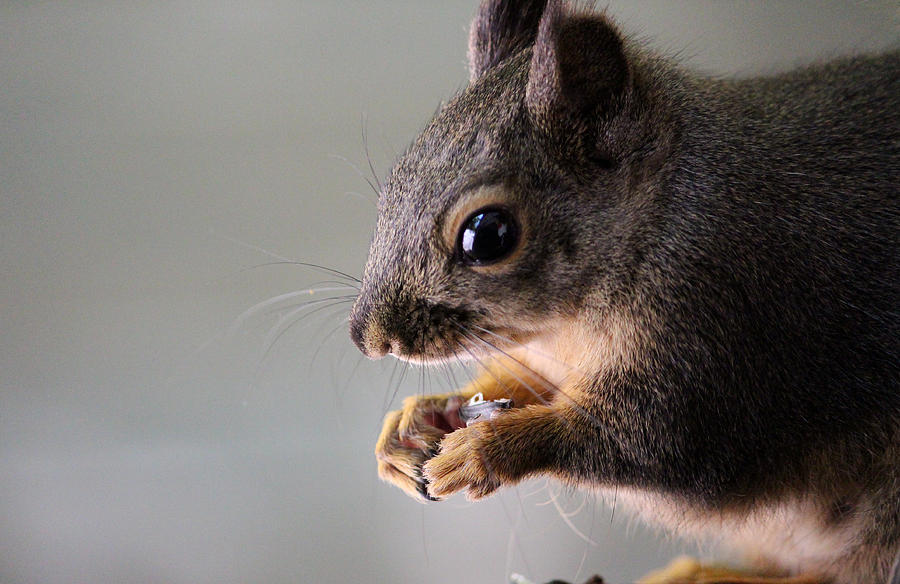 I would say this is the Glamour Shot for "Bud" The Douglas Squirrel. I could see how he holds the seed, and how quickly he can open the Sunflower seed. I counted 2 seeds a second, on average. This was "Bud" on a serious day. I see how the "nubs" on his paws are like thumbs. He hold the seeds with these nubs. Anyways, I know it's just a little furry squirrel, but he entertains me! Here are some of those facts about the little furry fellow!
These little brown squirrels, known as Douglas Squirrels have to fight it out for the territory.They really try to guard their territory against the invasive Grey Squirrel that has taken over our area. They sure are interesting little fellows. Here is some information on these cute little critters.
Squirrels are among the most familiar wild mammals that we encounter, both in our backyards and out in the wilderness. Unlike many mammals, squirrels are diurnal and their energetic antics make them highly conspicuous.
The Pacific Northwest is home to numerous ground squirrels and tree squirrels, including a couple non-native species.
The Douglas Squirrel (Tamiasciurus douglasii)– also called a Chickaree– is the species you are most likely to see in the forests of western Washington and Oregon. These bold little animals are very vocal and will often bark, growl, or whistle at (i.e. ‘scold’) those they perceive as intruders, including well-intentioned hikers and naturalists. Douglas Squirrels are 11-14 in length (28-36 cm). They have brown fur on their backs and orange or orange-white fur on their bellies. A black line may run along the squirrel’s sides, dividing the dorsal and ventral fur. The ears are tipped with black tufts and their is a ring of light-colored fur around the eye. Douglas Squirrels live in coniferous forests from British Columbia south to the Sierra Nevada mountain range in California. You can see a range map here. Old tree cavities excavated by woodpeckers are used as nests by Douglas Squirrels in the winter (they do not hibernate). The squirrels make dreys out of abandoned crow nests and use these in the warmer months. The primary food source for this squirrel is nuts from conifer cones, including those from fir, pine, spruce, and hemlock. Piles of Douglas Fir cone scales at the base of a tree are evidence of Douglas Squirrel feeding. Green cones are clipped from trees by Douglas Squirrels in the autumn. The squirrels then stash the cones in caches called middens. Hollow spaces under logs or rocks are common places for middens. A midden serves as a sort of pantry in winter, when food is otherwise scarce for squirrels. Hundreds of cones might be piled in a midden and these may accessed for several years. Douglas Squirrels also east mushrooms, berries, and seeds. Predators Owls, Northern Goshawks, American Martens, Bobcats, foxes, Coyotes, and domestic cats all eat Douglas Squirrels.

What a gorgeous close-up of this little cutie. L&F

Your animals captures are also stunning. This is so real!

This is such a wonderful photo of this squirrel! Just how close were you, or did you have a zoom? I love the reflection in his eye and how he holds the seed. Thanks for the description....it was very informative. f/l

What an adorable close up capture, Kym! The eyes have it! L/F

Great shot and so sharp and of course so super cute, love love it exactly as it looks = perfect!

Kym, This is Priceless!. I could spend hours smiling away at all your talented photographs!..ft.vt.tweet

Beautiful close-up. Wonderful detail of such an adorable creature!

Such really good photography! I so love coming to your pages, they always make me so happy, with all your beautiful animals!

Congratulations on your outstanding artwork! It has been chosen to be FEATURED in the group “500 VIEWS.”

Wow! How much closer can you get! Great capture! F/L

Wow! Super cute capture! Wonderful closeup of this lil guy. And the title is to cute! L/F Featured in Amazing Art and Artists group! Karen Cook nominated you for the Artist of the Month feature, results coming February 1st!

Adri and Ray, Thank you so much for the nomination for feature of the month. I appreciate your time and efforts and all for the group..

Back to smile at this adorable image. I have nominated you for Artist of the Month in Amazing Art and Artists. Your work is always refreshing and brings a smile to my face

Oh Karen, You are so kind. Thank you so much for the nomination for artist of the month. YOUR photos bring a smile to ME as well. I appreciate your votes and promotes.

Christine, Thank you so much for stopping by and giving this a "FAV".......

What a great portrait! My congratulations!

Love wildlife and this is a gorgeous capture and presentation

Kym, he delights me, also! What a great scenario about him and what a fabulous macro of such a great little guy! Kudos! Fav'd!

He looks to me, like someone has spoiled him! I wonder who! ;-) L/F

Congrats on the 3rd place win in the Anything You like Contest for this little fella! I knew he had it in him :-)

This is just too cute, Kym! Faved, liked and voted in the Anything You Like contest! :)