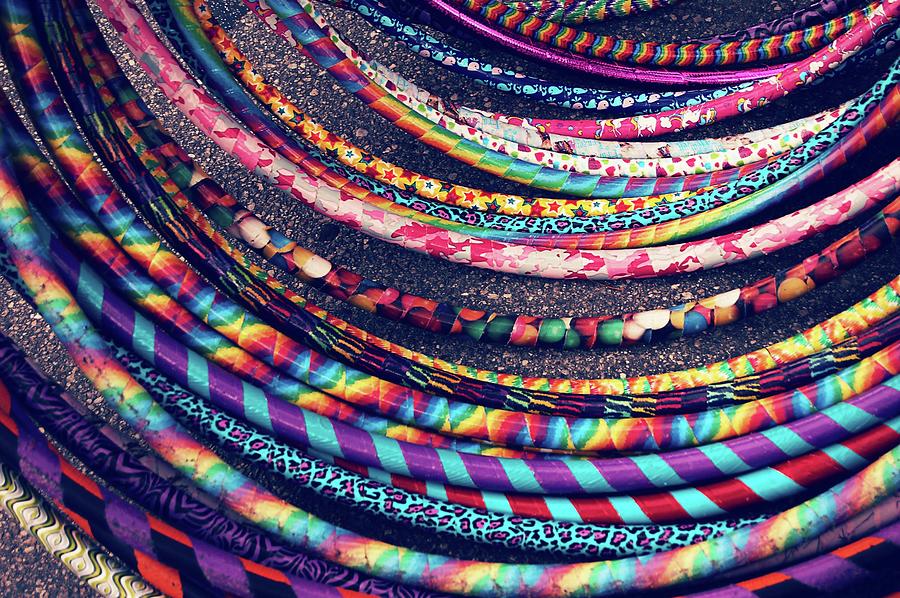 A hula hoop is a toy hoop that is twirled around the waist, limbs or neck. The modern hula hoop was invented in 1958 by Arthur K. "Spud" Melin and Richard Knerr, but children and adults around the world have played with hoops throughout history. Hula hoops for children generally measure approximately 70 centimetres (28 in) in diameter, while those for adults measure around 1 metre (40 in). Traditional materials for hoops include willow, rattan (a flexible and strong vine), grapevines and stiff grasses. Today, they are usually made of plastic tubing.
Before it was known and recognized as the common colorful plastic toy (sometimes filled with water or sand), the traditional "hula hoop" was made of dried willow, rattan, grapevines, or stiff grasses. Though they have been in existence for thousands of years, it is often incorrectly believed that they were invented in the 1950s.

Such a fun photo! l/f

What a colorful and fun image, Christopher. Great composition and capture. L/f

So fun and colorful! l/f

Thanks Judi....was surprised to see so many ...lol

Cool nostalgic capture Chris! Love this as a throw pillow or tote...awesome!

Thank you very much Cathy for the feature in the Everything Else non objective abstract different a.....it is greatly appreciated

Thank you very much Alana....

Your cropping enhances the "spin" of colorful patterns. Sweet memories!

I love all the bright colors, patterns, and textures! Plus it reminds me of childhood- the hula hoop was one of my favorite toys. This has an abstract feel...a nostalgic abstract! L/F

Thank you very much Sarah....I too remember those days!!!

This is fantastic, I love all the colors and patterns

Thank you very much Helen.....That's what drew me to it but for the life of me I don't remember colorful hoops like these back in the day....LOL

What's the story of that pretty stack?

I ran across these at an annual antique festival in New Smyrna Beach.....they were just crying out Pick Me, Pick Me!!!

Great eye to get this colorful and fun image!...L/T