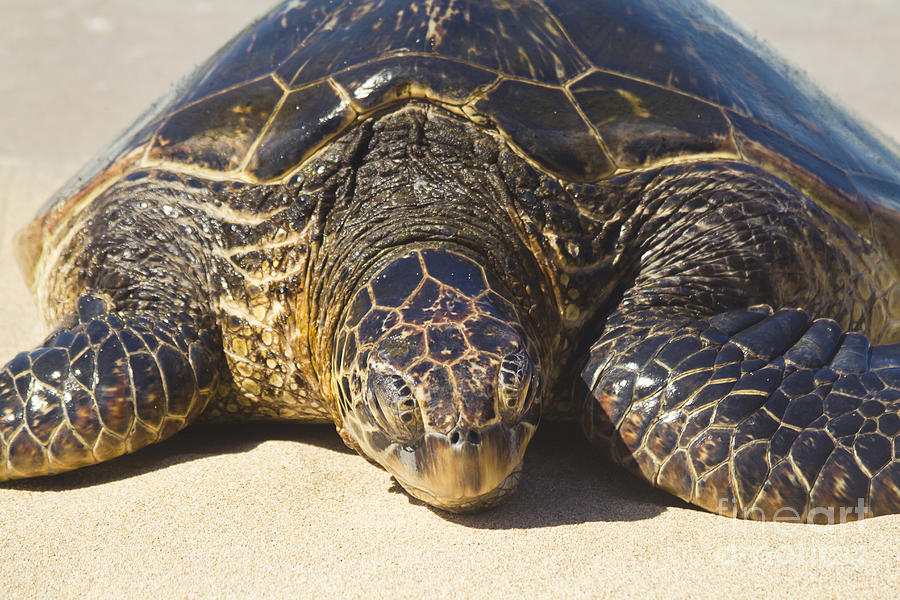 The green sea turtle (Chelonia mydas), also known as the green turtle, black (sea) turtle, or Pacific green turtle, is a large sea turtle of the family Cheloniidae. It is the only species in the genus Chelonia. Its range extends throughout tropical and subtropical seas around the world, with two distinct populations in the Atlantic and Pacific Oceans. The common name comes from the usually green fat found beneath its carapace. This sea turtle's dorsoventrally flattened body is covered by a large, teardrop-shaped carapace; it has a pair of large, paddle-like flippers. It is usually lightly coloured, although in the eastern Pacific populations parts of the carapace can be almost black.

Unlike other members of its family, such as the Hawksbill sea turtle, C. mydas is mostly herbivorous. The adults usually inhabit shallow lagoons, feeding mostly on various species of seagrasses. Like other sea turtles, green sea turtles migrate long distances between feeding grounds and hatching beaches. Many islands worldwide are known as Turtle Island due to green sea turtles nesting on their beaches. Females crawl out on beaches, dig nests and lay eggs during the night. Later, hatchlings emerge and scramble into the water. Those that reach maturity may live to eighty years in the wild . .

Ho'okipa Beach Maui North Shore Hawaii
Copyright © 2014 Sharon Mau - All Rights Reserved
http://sharon-mau.fineartamerica.com
This is a Rights-Managed Image protected by copyright. My images do not belong to the public domain. Images may not be reproduced, downloaded, distributed, transmitted, copied, reproduced in derivative works, displayed, published or broadcast by any means or in any form without prior written consent from the photographer Sharon Mau - Mahalo