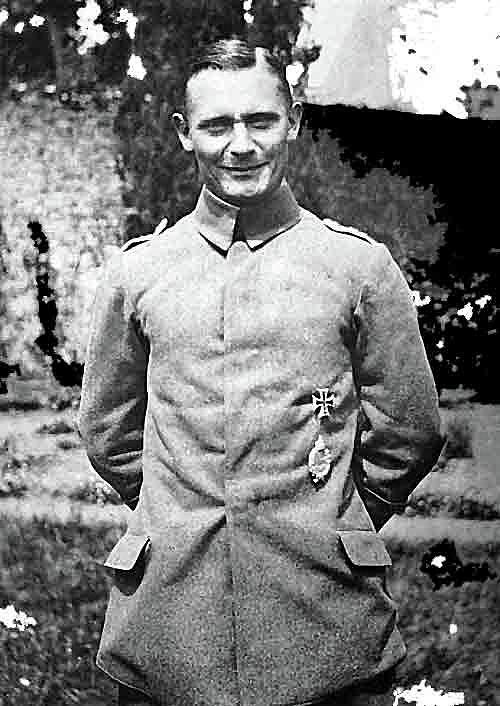 "After completing the pilot's training course, Goring was assigned to Jagdstaffel 5. Seriously wounded in the hip in aerial combat, he took nearly a year to recover. He then was transferred to Jagdstaffel 26, commanded by Loerzer, in February 1917. He steadily scored air victories until May, when he was assigned to command Jagdstaffel 27. Serving with Jastas 5, 26, and 27, he continued to win victories. In addition to his Iron Crosses (1st and 2nd Class), he received the Zaehring Lion with swords, the Friedrich Order, the House Order of Hohenzollern with swords third class, and finally, in May 1918, the coveted Pour le M�rite.

According to Hermann Dahlmann, who knew both men, Goring had Loerzer lobby for the award. He finished the war with 22 victories. A thorough post-war examination of Allied loss records showed that only two of his awarded victories were doubtful. Three were possible and 17 were certain, or highly likely.

In the last days of the war, Goring was repeatedly ordered to withdraw his squadron, first to Tellancourt airdrome, then to Darmstadt. At one point, he was ordered to surrender the aircraft to the Allies; he refused. Many of his pilots intentionally crash-landed their planes to keep them from falling into enemy hands.

Like many other German veterans, Goring was a proponent of the Stab-in-the-back legend, the belief which held that the German Army had not really lost the war, but instead was betrayed by the civilian leadership: Marxists, Jews, and especially the Republicans, who had overthrown the German monarchy."