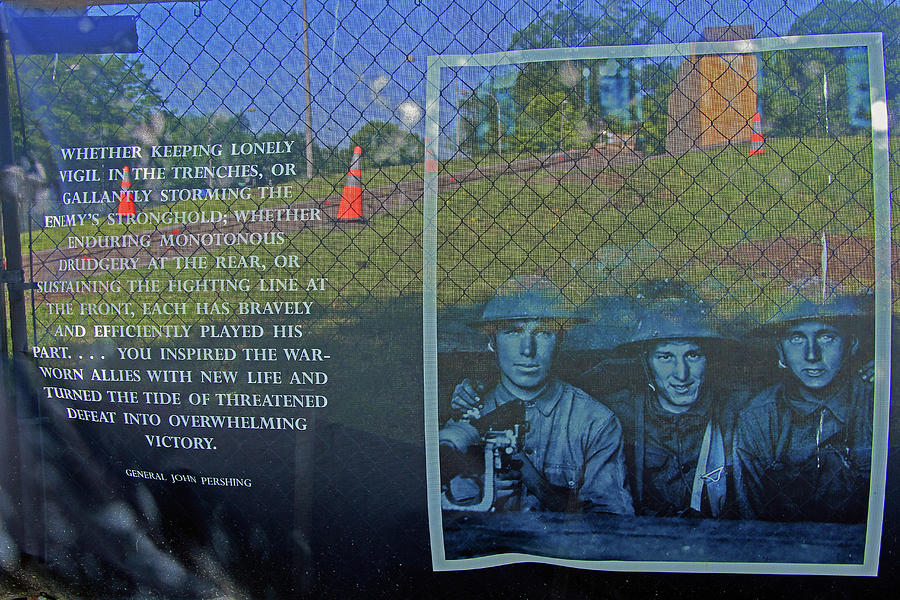 It has been more than 100 years since World War I ended in 1918, and finally a national memorial to America’s participation in that war is being built in Washington, DC. The United States suffered 53,402 casualties, and over 200,000 soldiers were wounded; yet, in our nation’s capital, which has memorials for every other major war of the 20th century, it has taken over a century for construction to finally start on the United States National World War I Memorial. It is being built on 1.76 acres of land that was previously Pershing Park, and is conveniently located one block from the White House at Pennsylvania Avenue and 15th Street, across the street from the historic Willard Hotel.

The construction site is surrounded by a barbed wire fence that is covered with images of people either serving in the war, or affected by it. Quotes about the war, such as a prominent one by General John Pershing, are also on the fence. I have taken dozens of photographs of the “Memorial Fence”, as I call it, and have captured as many different pictures and quotes as possible. Each of these photographs have the same title and are separated from the others by the number I have assigned to it. Also, while processing these photographs, which were all taken in color, I found that most of the images were quite compelling in black and white, so there are two versions of these photographs – first, in color, then followed by the black and white version.

The quote in the photograph is:

“Whether keeping lonely vigil in the trenches, or gallantly storming the enemy’s stronghold; whether enduring monotonous drudgery at the rear, or sustaining the fighting line at the front, each has bravely and efficiently played his part . . . You inspired the war-torn allies with new life and turned the tide of threatened defeat into overwhelming victory.” - General John Pershing