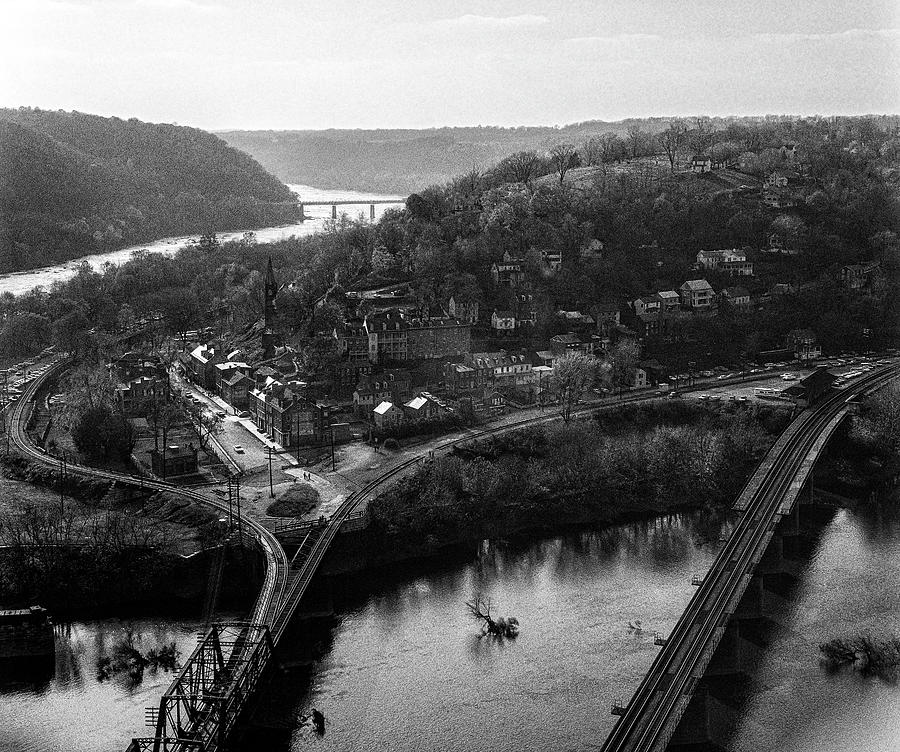 Harpers Ferry, population 286 at the 2010 census, is a historic town in Jefferson County, West Virginia, United States, in the lower Shenandoah Valley. It was formerly spelled Harper's Ferry with an apostrophe —in the 18th century it was the ferry owned and run by Robert Harper — and that form continues to appear in some references.[6] It is situated at the confluence of the Potomac and Shenandoah rivers, where the U.S. states of Maryland, Virginia, and West Virginia meet. It is the easternmost town in West Virginia and during the Civil War the northernmost point of Confederate-controlled territory. (The northernmost Virginia city of Wheeling was strongly anti-slavery, and was the first capital of the breakaway region that became West Virginia.) The town's original, lower section is on a flood plain created by the two rivers and surrounded by higher ground.

The lower part of Harpers Ferry is within Harpers Ferry National Historical Park. Most of the remainder, which includes the more highly populated area, is included in the separate Harpers Ferry Historic District. Two other National Register of Historic Places properties adjoin the town: the B & O Railroad Potomac River Crossing and St. Peter's Roman Catholic Church. Harpers Ferry and the adjoining town of Bolivar, though legally two distinct municipalities, together form one large town.

In 1733, Peter Stephens, a squatter, had settled on land near "The Point" (the area where the Potomac and Shenandoah Rivers meet), and established a ferry from Virginia (now West Virginia) to Maryland, across the Potomac. Fourteen years later (1747), while traveling from Maryland to Virginia, Robert Harper passed through the area which was named "The Hole" (the gap in the mountains along the Potomac River). Harper recognized the potential for industry, given the power the two rivers could generate, and the traffic he could ferry across the Potomac River. Harper paid Stephens 30 British guinea for what was essentially Stephens' squatting rights, since the land actually belonged to Lord Fairfax.[11]:12

In April 1751, Harper purchased 126 acres of land from Lord Fairfax. In 1761, the Virginia General Assembly granted Harper the right to establish and maintain a ferry across the Potomac River (even though a ferry had been functioning successfully in the area before and after Harper first settled there). In 1763, the Virginia General Assembly established the town of "Shenandoah Falls at Mr. Harpers Ferry."[12]:100

On October 25, 1783, Thomas Jefferson visited Harpers Ferry. He viewed "the passage of the Potomac through the Blue Ridge" from a rock that is now named for him. This stop took place as Jefferson was traveling to Philadelphia and passed through Harpers Ferry with his daughter Patsy. Jefferson called the site "perhaps one of the most stupendous scenes in nature."[13]:22

George Washington, as president of the Patowmack Company (which was formed to complete river improvements on the Potomac and its tributaries), traveled to Harpers Ferry during the summer of 1785 to determine the need for bypass canals. In 1794, Washington's familiarity with the area led him to propose the site for a new United States armory and arsenal. Some of Washington's family moved to the area; his great-great-nephew, Colonel Lewis Washington, was held hostage during John Brown's raid in 1859, and George's brother Charles Washington founded the nearby Jefferson County town of Charles Town.[14]:13

In 1796, the federal government purchased a 125-acre (0.5 km2) parcel of land from the heirs of Robert Harper. Construction began on the United States Armory and Arsenal at Harpers Ferry in 1799.[15] This was one of only two such facilities in the U.S., the other being Springfield, Massachusetts. Together they produced most of the small arms for the U.S. Army. The town was transformed into an industrial center; between 1801 and 1861, when it was destroyed to prevent capture during the Civil War, the armory produced more than 600,000 muskets, rifles and pistols. Inventor Captain John H. Hall pioneered the use of interchangeable parts in firearms manufactured at his rifle works at the armory between 1820 and 1840; his M1819 Hall rifle was the first breech-loading weapon adopted by the U.S. Army.[16]:151

Industrialization continued in 1833 when the Chesapeake & Ohio Canal reached Harpers Ferry, linking it with Washington, D.C. A year later, the Baltimore & Ohio Railroad began service through the town.[17]

Love this shot, Greg. I have visited Harpers Ferry several times over the years. I have been on top of Maryland Heights a few times also.Such a historic place. THanks for sharing your beautiful photo of it. L/F

I appreciate your great comment Dan and the L/F!! It has always been one of my favorites! Had to wait until the digital era to scan the negative to do the scene justice!!

Thank you Stephen for the fav and great comment!!

Congratulations! Your fantastic photographic art has been chosen as a Camera Art Group feature! You are invited to archive your work in the feature.

Thanks Pam for the feature in Camera Art Group and the fav!!