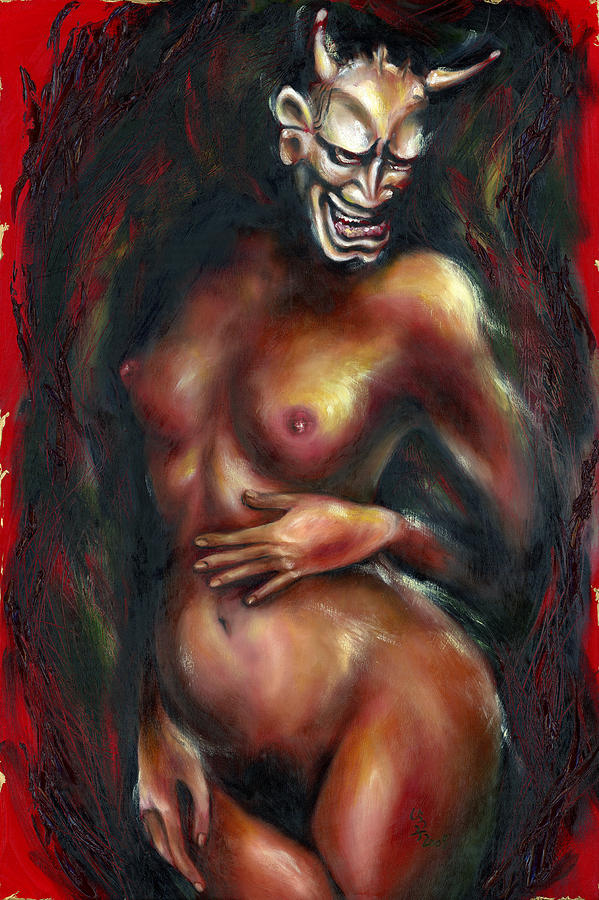 Oil painting of a beautiful woman in sensual nude wearing Hannya mask of Japanese Noh theater. The hannya mask is a mask representing a female serpent-demon filled with malicious jealousy and hatred. Worn by women betrayed or spurned by their lovers who turn into serpent demons. " This is the painting from my inspiration in Genji story, which is widely acknowledged as the world's first novel, written by a court lady in Heian Japan (795-1192 AD). Genji, a man of passionate impulses and a lover of beauty, the favorite son of the Emperor, though his position at court is not entirely stable. "Aoi no Ue" is the Genji's first principal wife, married to him when he is 12 and she is four years older. Not surprisingly, she finds him childish, and their relations remain uncomfortable until her death. her death was brought by an evil spirit of Lady Rokujo who is the Widow of the crown prince Prince Zembo and a longtime mistress of Genji. I was inspired with so strong woman's emotion and love that Lady Rokujo held in her as to change her into evil spirit to attack her rival, which is represented by "Hannya mask" in Noh performance. I wanted to express the naked nature of women that is held in our depth. " --------- Hiroko Sakai is a contemporary Japanese artist who has lived and worked in San Francisco, California since 1999. The intense passion that she conveys in her art has inspired deep expressions of emotion in viewers over the years. -->>For more information about her artwork, visit Hiroko Sakai's official website : www.hirokosakaifineart.com

This is fantastic work.