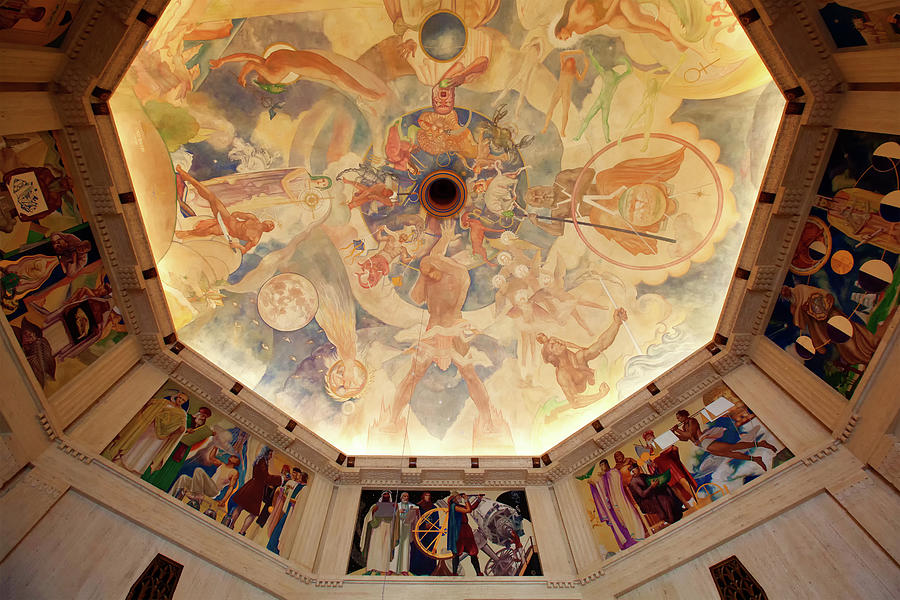 Murals in the central rotunda of the Griffith Observatory in Los Angeles. I have modified the raw photo capture considerably to enhance the overall colors, beauty, balance and luminosity. I have also given it a painterly look, in order to provide you a breathtaking, high quality, fine art print through this website.

This is a wider angle view of a photo I posted recently entitled 'Griffith Observatory Ceiling Art' (see my Los Angeles gallery).

The ceiling mural shown here is surrounded by eight large rectangular wall murals, of which only five are captured in this photo (I was limited by the camera lens used). The ceiling mural portrays classical celestial mythology with a depiction of Atlas, the four winds, the planets as gods, and the twelve constellations of the zodiac. The surrounding rectangular wall murals show panels on astronomy, aeronautics, navigation, civil engineering, metallurgy, electricity, time, geology, biology, mathematics and physics.

The Griffith Observatory is a Los Angeles icon, and a free-admission public facility owned and operated LA's Department of Recreation and Parks. Located on the south-facing slope of Mount Hollywood in Griffith Park, it is a popular tourist attraction and the most-visited public observatory in the world, having attracted 73 million visitors in the last 75 years. It is a unique mix of public observatory, planetarium, and exhibition space.