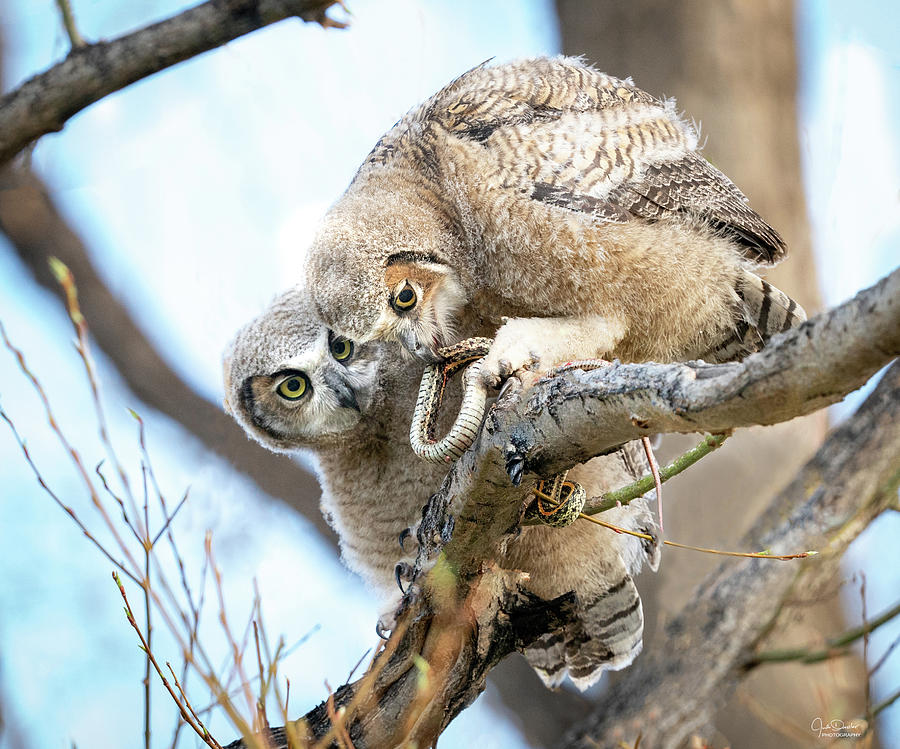 Momma Great Horned Owl delivered a live garter snake to one of her young owlets. After watching for a couple minutes, she flew off, confidant that the young one would manage. These two owlets had fledged from the nest, but they were still babies, and had no idea how to eat a snake! The sibling is watching with great interest as brother or sister is trying to figure out what to do! Eventually s/he did manage to swallow the snake, but not until after quite a fight was put up by the valiant snake.

Amazing series Judi! What a memory for you, nice work!

What a great capture and composition Judi.....had to revisit this amazing series of owlets!

Fantastic capture of these adorable owlets enjoying a meal, Judi! Wonderful focus, detail and light in this magnificent composition! L/F

This wouldn't be on my lunch menu, but I can sure see that these siblings are looking to enjoy this snake for lunch! Great capture!! L/F

The expressions are priceless. You have a wonderful talent for capturing the emotions of your wildlife shots Judi! Love this one! L/F

A good eye and fantastic capture.

This is really amazing Judi, I love seeing these little ones thrive like this.

Oh wow! Great catch, Judi, and to the young owl as well I suppose! I love the expression on the other owl's face...he looks very interested and very hungry! L/F

Wow, Judi, fabulous image! And congrats on your features, AND "Dawn's Delight"!! L/F

Superb shot, congratulations on your feature!

Thanks a lot, Jurgen!

Congratulations on your features! Such a wonderful capture! Lucky you to have watched them!

Such a gorgeous scene and capture!!! They got there a tasty snack! Such amazing hunters!!!

Thanks much, Apostolos -- a tasty snack alright! :)

Oooh, a snake snack!!! I'll pass, but am enjoying your fine image of these two babies snacking out - or at least ONE is snacking. Do you think they'll actually share?

They don't share, so the other one just has to look on. Besides, the snake was swallowed whole -- too difficult for these young owls to tear it apart. Thank you, Tony!

Thank you so much for the Selection of the Week and feature, Larry! Much appreciated!

Thanks so much, Angela!

This is amazing! Wonderful capture! Shared/Pin

Thanks so much, Linda!

Amazing photograph of a pair of Great Horned Owlets trying to eat a snake, Judi! Congratulations on your photo's selection by Dawn for the Weekly Dawn's Delights"! F/L

Thank you so much for the feature, Jordan!

Congratulations on your feature in the group Images That Excite! l/f

Congratulations! You are one of 10 Dawn’s Delights for 6/10/2021!! This fine image of an identified wild bird is now featured on the homepage of Wild Birds Of The World - A Nature Photography Group. Please take a moment to add it to the 2021 Features Archive and Thanks discussion for additional visibility.

Wow, thank you so much, Dawn! I am always so honored to be chosen. :)

What a thing to witness! Great capture. They are beautiful.

Many thanks, Mary Lynn!

Congratulations .... Your wonderful work of art has been chosen as a FEATURE in the group "ART FOR PASSION - PASSION FOR ART". You are free to post your featured image as a permanent place to continue gaining exposure even after the image is no longer on the Home Page.

Thank you so much for the feature, Rita!